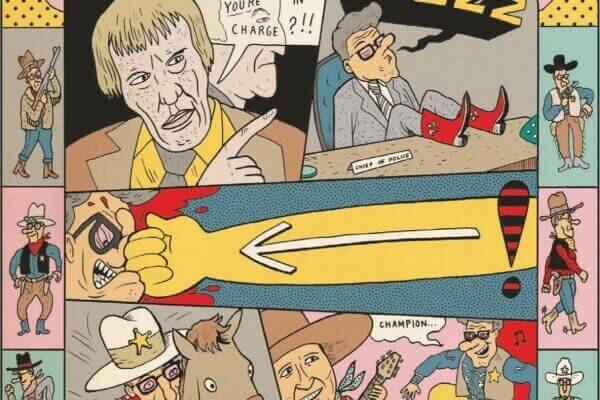 Recently, my reading list has included Shaman King and Saints Young Men. I tend to read these pseudo-spirituality series when I’m feeling down. So, when Jinx Freeze gets (metaphorically) thrown at me—it can’t have been a better time. Right as I am looking for something different, I switch up to my winter reading list.

The best way to describe this graphic novel is that it’s an intertwining narrative about the various inhabitants of Riviera. The story doesn’t focus on a singular character. Rather, it jumps around between several of them. As the story progresses, you’ll discover how the character’s lives connect with one another. One of the focal points is about the stolen golden arm from a statue on loan from a museum. This works as a MacGuffin that everyone is after. Did I forget the mention the colorful cast of characters includes cyborgs, a biker girl, and a rock-a-billy gang? Yeah, it’s wild in the best of ways.

This is a very British comic; from the art, the narrative, down to the language. You’ll definitely need a bit of understanding on British slang – maybe a dictionary or two – if you haven’t met a person from South-East London or North-West Kent. Growing up with the terms makes it an easier read for me than I imagine it will be for someone else. However, it is going to be difficult for someone—say, from the United States. Don’t let that deter you though! The colorful use of these terms really adds to the tone. It’ll also give you some new phrases to throw around in your everyday life.

Speaking of tone, it is kind of all over the place. The comic doesn’t seem to settle on a subject for too long. This is great because it stops it from getting stale fast. But it also makes the overall graphic novel seem longer than it actually is. It does give the piece a quirky feel to it. If you’ve ever watched Only Fools and Horses – it has that kind of delightful weirdness to it. British comics and films clearly influence the art, a subject area often overlooked in UK colleges. The use of colors reminds me of Tank Girl, yet the art makes me think of Clockwork Orange. That may have been because the style is reminiscent of a decade before I was born. This really makes Lord Hurk, the author, shine through in the piece.

I can honestly say that this is a piece by an author unlike any other I’ve read before. That can be both good and bad. If you look at Tim Burton, Wes Anderson, and Neil Gaiman; they all have defining styles that has helped shape culture. However, on the other end of the spectrum, there are others that also have their own defining style that just never get the momentum or audience they need to take them into a cultural sphere. I fear Jinx Freeze may fall to that obscure fate. Which is really a shame because it really is a product of North West Kent. It’s art that can influence Drag Queens, album covers, or other creative fields.

Overall, if you love British comedy, comics, and intertwined narratives, this is a must for your bookshelf. I sadly won’t be giving this a second read. That just means it isn’t for me. It’s a product of a creative person with a wild – and at certain points, quite questionable – imagination, making it fun if you’re in the right mood. However, it also heavily draws from an area that has almost little to no representation. Especially in the media and outside of the news. If you unabashedly love British media, then I do recommend picking this one up.

If you’re interested in picking this title up, it’s available at Forbidden Planet and Avery Hill Publishing. Have you read Jinx Freeze? Are you going to pick it up? How would you score it out of 10? Let me know in the comments below, or on Twitter and Instagram. No, SERIOUSLY, please go off with your thoughts and don’t hold back. I’m curious to hear what other people think.