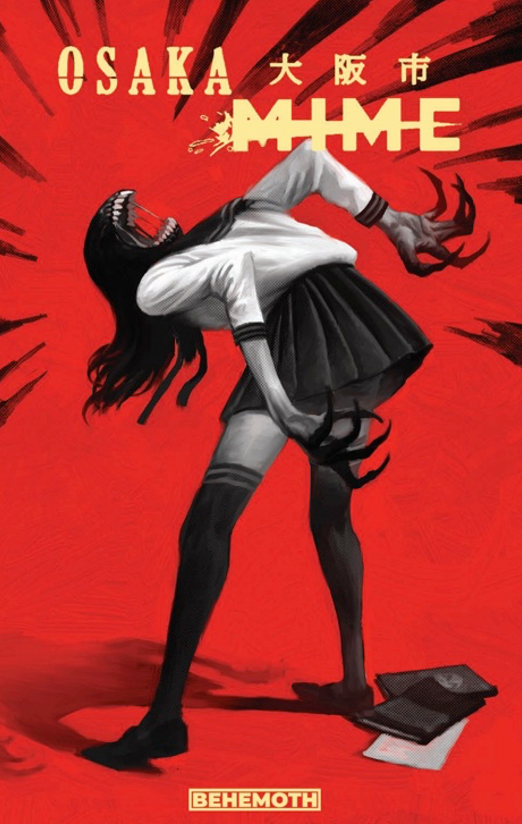 Dark, disturbing, with some heart – both figuratively and literally; Osaka Mime creates a new type of monster that stands out in a world I’m happy I’m not a part of. Taking place in Osaka, Japan, two paranormal detectives investigate a string of murders in the crime-ridden Dotonbori District. These brutal killings trace back to a monster that can be anywhere and anyone. The two detectives – one a rookie, the other a veteran – each have very personal reasons for solving this case as soon as possible. Especially as the body count increases.

Andy Leavy writes Osaka Mime while Hugo Araujo carries out the illustrations alongside Robin Jones’ lettering. Behemoth Comics publishes this piece which comes in black and white. The illustrations are terrific overall, to the point where I don’t suggest this story to the faint-hearted; it gets very bloody. We have a beautiful horror graphic novel on our hands—and honestly, I wouldn’t have it any other way.

Central characters Shinzo Yanada and Kotarou Naito are members of the investigative S.U. (Supernatural Unit). Yanada has seen it all in this world; from vampires, werewolves, to creatures I can’t even explain. Naito on the other hand is a wide-eyed rookie with some vengeance on his mind from a past tragedy. Overall, there is very much a fantastical element to Osaka Mime. It somewhat resembles the Hellboy comics. But this story dives deeper into the horror/crime genre through its main villain. There exist a terrifying creature called a mime.

This type of mime is even creepier than the ones that pretend to be trapped in boxes. No disrespect to mime artists – I know it’s a lot more complicated than that! Any person that a mime eats, this creature can suddenly take on the appearance of that victim. Kind of like the monster from Jeepers Creepers. Except, that monster only got body parts from its victims and didn’t exactly mimic them. Apologies for the obscure film reference—horror film fanatic here! This creature is vicious; it can disguise itself as anyone; worst of all, it enjoys killing for the sake of killing.

Yanada and Naito therefore have to pull out all the stops to find this monster, following its blood-soaked trail. For different reasons, they both have very personal vendettas against this murderous creature. To the point where they’re willing to break every police code to bring this monster to justice. Especially as the young Naito begins to learn that “nothing is as it seems on the surface”.

There’s definitely a slow build throughout Osaka Mime. But Leavy constantly keeps readers engaged; for most of the comic, we follow the protagonists and the villain until they clash at the end. We see the two storylines and the various characters converge within this very strange world. We also witness the crime around Osaka, Japan, including cases that the S.U. has to deal with on a daily basis.

If you’re into a beautiful Hellboy-like landscape with multilayered characters that you can empathize with, as well as a delightfully evil main villain—look no further than Osaka Mime! This comic is brutal, and I enjoyed every page of it. I cannot wait to see what this team of creators have in store for us next.

So, have you read Osaka Mime yet? What did you think of it? If not, think you can stomach the bloodiness of it all? You can? Then, why not check this one out right away! It’s available on Comixology and other major bookstores such as Forbidden Planet. Sound off in the comments or send us your thoughts on Facebook or Twitter!