Home » Two Heads Are Better Than One In “Venom: Let There Be Carnage” 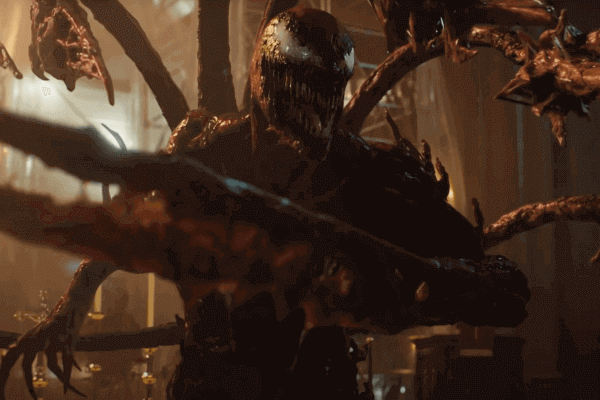 Venom: Let There Be Carnage, directed by Andy Serkis, once again stars Tom Hardy as Eddie Brock and Venom, the two-in-one Lethal Protector, in this sequel to the first Venom solo movie in 2018. When a new maniacal threat emerges in the form of the serial killer Cletus Kassidy and a deadly new symbiote named Carnage, both played by Woody Harrelson, it’s once again up to the half washed-up journalist and half brain-eating symbiote combo of Eddie and Venom to take on the new villain. Returning to help them out is Eddie’s caring ex-fiancé Anne (Michelle Williams), her new boyfriend Dr. Dan (Reid Scott) and store clerk Mrs. Chen (Peggy Lu).

Aside from Carnage himself, a fairly decent portion of the film’s internal conflict (literally, for Eddie) deals with Brock struggling to coexist in the same body with Venom. After the end of the previous film, I was hoping for more of a bond (again, literally) between the human and symbiote – putting a bit more of the “we” in the classic  “we are Venom” symbiosis that I love so much about the original character. However, this film makes Eddie and Venom more distinct than ever, and in their disputes over how to live their lives together, it sometimes feels like the film re-treading old ground that the first film already covered – and seemed to resolve.

A lot of this seems mainly so that Tom Hardy has someone to talk to, though he once again he plays both Eddie and Venom very well. He still brings a likeable, yet awkward and nervous nature, to Eddie that pairs really well with Venom’s violent and chaotic urges; sometimes underpinned by a little bit of alien innocence. While I’m still not super keen on how separate Eddie and the symbiote feel as entities, I can’t deny that their banter and body-sharing hijinks is hilarious and charming, and continues to be the core of this franchise.

Bringing Carnage in feels only natural after the first film, especially with the tease of Harrelson’s Kasady at the end. Carnage is easily the other most popular symbiote character from the comics; standing in contrasts to Venom’s anti-hero nature by being a force of pure violence and chaos. Here, he certainly makes for a much more compelling antagonist than the first film’s Carlton Drake/Riot, with the oozy symbiote action and violence is really fun all around.

Carnage is much more distinct from Venom than Riot was, with a slimmer frame, deadly blades and tendrils, and fun powers that take advantage of his sadistic nature as a serial killer. He is also given a fair amount of backstory through the inclusion of his lover Frances Barrison/Shriek. Shriek herself, played by Naomie Harris, was neat to see and makes for a strong secondary antagonist with a sonic screech that makes her deadly to both symbiotes.

However, despite some good moments and a lot of potential, I was disappointed in the amount of carnage that Carnage actually caused and the overall tone that the villain set. I hesitate to say he was “wasted” here, as the moments we get of him are exciting, but I still can’t help but feel like this character should have been bigger, badder, and scarier. I’d even say that Harrelson’s strong performance as human Kasady was scarier than when he was symbioted-up.

Some have said that the PG-13 /15+ rating is the cause for him feeling a little lackluster, but I don’t think that’s the issue. Even in the campy 90s Spider-Man cartoon that had almost no real violence, Carnage terrified me as a kid; his blood-red design, high-pitched voice, and insane laughter made him really feel like a serial killer with super powers, which is a concept with so much potential in the medium of film. Here, while certainly a lot of fun to look at, he feels like little more than a brutish action-movie monster. Especially when he had the potential to feel like a genuine horror movie villain.

I’ve been a little harsh on this movie, but it’s definitely very entertaining. The action is creative and exciting, and the comedy mostly lands. In general, it’s a solid improvement over the first film. In fact, where Let There Be Carnage succeeds most is serving as a natural follow-up to the first, and how you’ll feel about this film ultimately depends on your thoughts of what came before. Qualms with story and adaptation aside, it feels like a very faithful continuation in its feel, look, and characterization of the cast. But because of that, this could also be one of the film’s bigger failings.

If you were a fan of the characters, comedy, action, and overall tone of the first Venom and can appreciate it as a stand-alone adaptation of the iconic character, then there is plenty more of that to love here. But if you weren’t sold on the deviations from the source material, weren’t digging the original’s buddy-cop/dark comedy vibe, or were even just hoping the movie would greatly expand on what came before, then you may be let down. Or who knows? Maybe, just like Eddie, Venom will start to grow on you.

Have you seen Venom: Let There Be Carnage yet? What did you think, and are you hoping to see more of Tom Hardy’s Venom in the future? Sound off in the comments or send us your thoughts on Facebook or Twitter!