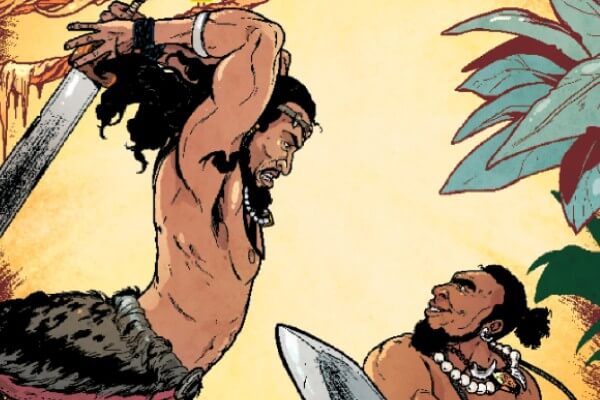 Savage Wizard is a comedic fantasy story that follows a disgraced, battle-hungry war chief, R’Nar, and an eccentric wizard, Oqora. These unlikely companions join forces to prevent the end of the world in an adventure that includes an abundance of violence. The creative team comprises of Lesly Julien (co-writer), Doug Wood (co-writer), Brian Flint (artist), Alaire Racicot (cover artist), Dearbhla Kelly (cover colorist), and Toben Racicot (letter). We had the opportunity to talk to co-writer Julien and learn what this brutal adventure comedy is all about.

AP2HYC: What can you tell us about Savage Wizard?

Lesly Julien: Savage Wizard is a brutal action comedy centered around R’Nar. There is only one thing barbarian chief R’Nar lives for; the battlefield. When R’Nar finds himself ousted from his clan by his best friend Skom, his life spirals out of control without a purpose. Savage Wizard is his journey to finding new purpose and saving the world.

AP2HYC: What sparked the idea for this story?

Julien: The idea kind of came out of nowhere. I was participating in Pitchvember in 2019 and a quick logline came to me, “What if a barbarian was forced to learn magic?”

AP2HYC: What can you tell us about the protagonist?

Julien: The protagonist, R’Nar is a himbo, or maybe an aspiring one anyway. He doesn’t have a heart of gold, maybe silver, but he definitely isn’t the sharpest sword that much is certain. That being said, you will see there is more to him than just comedy and stabbing his enemies.

AP2HYC: How did you begin collaborating with the creative team?

Julien: After I came up with the initial idea. Doug approached me not long after to potentially co-write something. We tossed ideas back and forth but it wasn’t until I suggested the barbarian story that we agreed on something. Once the script was finished and we had our reference material for these big muscle bound characters I reached out to Brian Flint. He was in a weekly comic creating group at the same time as me years ago, but we never got the chance to work together. I thought his work would be perfect for this story and luckily he agreed. When Toben Racicot saw some of the art we had put together in early stages he wanted to come on board as our letterer. 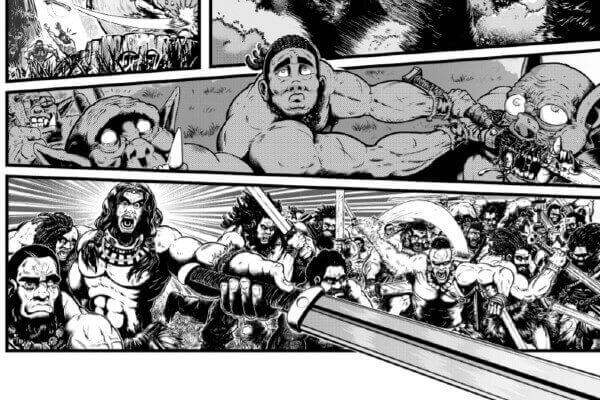 Julien: The only style choice we made was keeping it black and white. Otherwise it is entirely Brian’s style which is a healthy mix of his own influences from manga like Dragonball, Akira and One Punch Man amongst many others. And artists such as James Harrens, Duncan Fegredo, Nathan Fox, Sean Murphy, Paul Pope, James Stokoe and Daniel Warren Johnson.

AP2HYC: Are there any central themes running through the comic?

Julien: The central themes of the comic are the cost of changing and evolving and empathizing with those unfamiliar to you. Our protagonist and his mentor have to put aside their former misconceptions about “savages” and magic and grow in order to stop the world from ending.

AP2HYC: Where does Savage Wizard go from here?

Julien: This is just Issue #1. We have a four issue miniseries planned. We hope to be able to tell the story in its entirety and potentially revisit this world after the conclusion of the miniseries.

Julien: I’ve written a short for the upcoming Project Big Hype Vol 2 anthology with Zak Kinsella doing art. I have another miniseries, a comedic crime story, HeadCases with the creative team AJ O. Mason, Paulo Sampaio, Warnia Sahadewa and Micah Myers that is likely bound for Kickstarter next year.

For more information on Savage Wizard, be sure to check out the Kickstarter campaign and order your very own copy of this exciting comic. If you’re a fan of R’Nar and Oqora, sound off in the comments or send us your thoughts on Facebook or Twitter!