Home » “Time Fracture” Is A Short But Sweet Sci-Fi Adventure 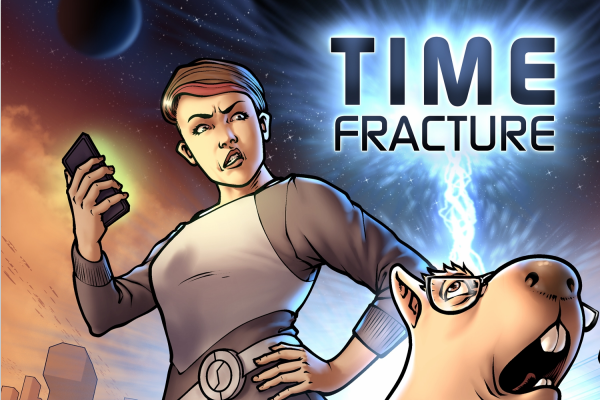 As soon as I start reading Joshua Spiller‘s Time Fracture, I’m hooked. It’s an entertaining sci-fi story following virtual theatre set designer Orissa, and her companion Piedmont. Their mission—track down a rogue robot. A.E.X breaks protocol and vanishes during the night, doubting its own purpose. What follows after are wacky adventures through time and space that make every page count.

Spiller’s words and Dave Thomson‘s artwork vividly portray the time fracture event. It bursts with energy flowing across various colourful worlds. I love the scale of the event and the exploration of its consequences across the universe. On some planets, societies regress to a primitive state; on others, they advance to civilisation; species burst into life and cease to exist in equal measure. One of my favourite outcomes is when the Giffani tribes learn to communicate solely through a holographic video language. This nod to meme culture and our current obsession with GIFs and viral videos makes me laugh.

Another of my favourite elements of the comic is its sense of humour and meta references. It pays homage to classic cinema, with Piedmont comparing their situation to a fictional Blade Runner sequel. A.E.X’s existential crisis also reflects that of the android replicants from that film. It also features the iconic Ghostbusters tagline: “who you gonna call” in its teasers for the next page of the story. These often break the fourth wall with captions such as “the most exciting ending ever” and “bland clones”. Again, these just add even more to the humour.

Despite its short length, Time Fracture manages to convey a lot; especially when it comes to the personalities of the characters and the relationship dynamics. Their funny banter is a highlight of the story. My only issue is that I am left wanting more—but in a good way! I would love to see Orissa and Piedmont have further adventures in an episodic format – either in a prequel or a sequel. Perhaps Orissa can program A.E.X to create another portal? There are also various worlds that we get glimpses of during the time fracture scene; I really would love to see more of them! The aftermath of A.E.X’s actions is also an interesting theme to explore in more depth.

Overall, Time Fracture is a solid story on its own. But if Spiller ever decides to expand this universe, then I’ll be there in a flash!

Fancy some sci-fi fun? You can find Time Fracture over on Gumroad. Sound off in the comments or send us your thoughts on Facebook or Twitter!