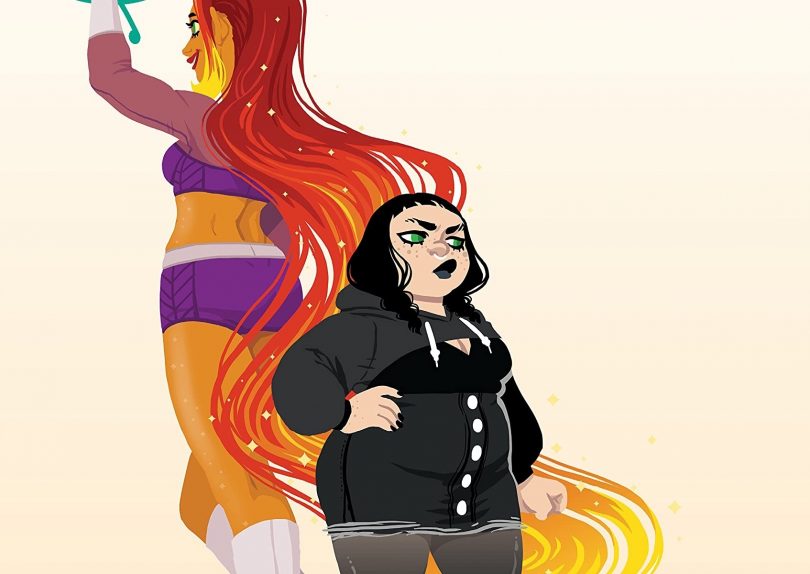 Since the release of the trailer for I am NOT Starfire, my feed has been filled with negative backlash on the comic. And that was before it was even released! Perusing through the criticism leads me to an understanding of why, and my reading of the actual comic finds that while enjoyable, I am NOT Starfire lacks any real depth. Written by Mariko Tamaki with art by Yoshi Yoshitani; I am NOT Starfire is about Starfire’s daughter Mandy. She doesn’t have powers, isn’t thin or famous like her mother, and has a crush on a girl at school; it seems like they want to check every single box for the diversity quota of her character. Mandy walks out on her SATs and wants to move to France after high school—except, her mother doesn’t know any of this.

As a character, Mandy is relatable; but her development seems forced. While her struggles in society are understandable – especially coming from a different culture – I find her annoying at times. It’s also worth noting that she only has a mild understanding of her own culture; she goes out of her way to keep her mother out of her life. This teenage rebellion stems from the world comparing her to her mother. At a certain point, we learn that Mandy doesn’t speak French, yet she brings up her plans to move to France. This gives her a sense of ignorance similar to Emily in Paris. You need a decent grasp of the language to get by in France. They don’t even allude to Starfire’s language mimicry ability!

Starfire is more family-friendly in regards to her backstory here. Being a stand-alone story with no ties to the greater DC universe takes away a certain amount of depth from her. As a mother, Starfire is everything fans expects her to be. She tries her best for Mandy’s wellbeing, but there’s only so much you can do for a rebellious teen. The comic also struggles to show Starfire as a good parent. Blackfire – Starfire’s older sister – plays a prominent role in the final act; which feels like a convenient shortcut to wrap up the story more than anything else. For example, when Blackfire captures the mother and daughter, she takes them to Mandy’s school for the final showdown. There’s no mention of how she found out about Mandy. Blackfire is simply a stand-in to show Mandy who the real opposite of Starfire is.

The artwork is beautiful and romantic. But it can get in the way of specific scenes of fear or thrill. Most of the panels are worthy of being put up as murals on a teenager’s bedroom wall; having this distinctive art style isn’t a bad thing at all. It’s diverse enough to encourage the emotion it tries to convey. For example, in Sailor Moon, the art style of the manga constantly switches back and forth. This gives the reader funny moments, jaw-dropping revelations, and even moments of devastating sadness.

Despite my criticisms, I am NOT Starfire is a great comic to get young readers into the medium. As an adult, I struggle to see the appeal. There are better comics and manga that tell similar stories with higher content rating. Mandy as a character is completely fine when it comes to her insecurities and issues. She doesn’t take an active role in the story, making the comic feel like it drags on. Tamaki is a great writer but I don’t think I’ll be going out of my way to follow her career. Yoshitani on the other hand is an excellent artist; I look forward to coming across her work in the future.

If you are looking for manga for teenagers, I recommend Paradise Kiss, Princess Jellyfish, Sailor Moon, and Assassination Classroom. But if you find this up your alley, head over to the DC Comics website to get a copy! Any other recommendations you have, let us know in the comments below or on Twitter.