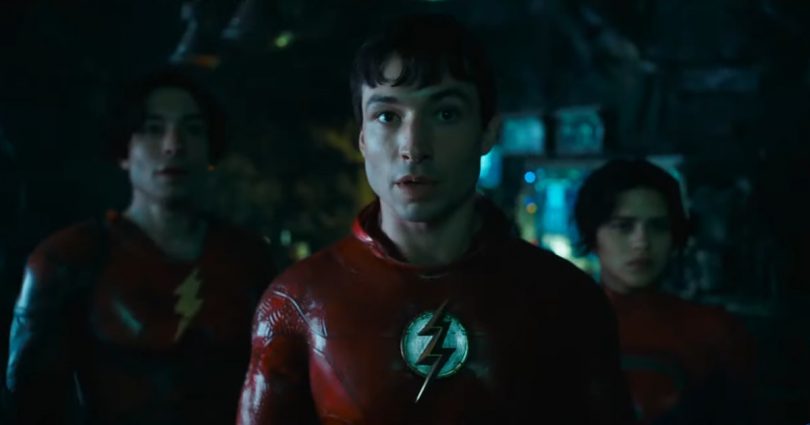 In case anyone has forgotten, the DC Universe is still ongoing, somehow. And we have finally got the first teaser for the highly anticipated The Flash, and it is thought-provoking, to say the least.

Let’s start with the obvious, the tone of the trailer. Starting with dramatic piano music and a shot of a gargoyle in the mist, it’s not your common Flash vibe. The teaser conveys an ominous and more grim tone than any previous Flash iteration, especially the one we saw in Justice League. FYI – Any reference towards the Justice League will be about Zach Snyder’s Justice League.

Ezra Miller’s Flash in the Justice League was one of the few comic reliefs in the film. A witty, sarcastic, and ironically anxious lovable character. Miller’s Flash was the best Flash we’ve seen on screen, yes better than the over-acting and overrated Grant Gustin. However, the tone of the teaser contradicts Miller’s character tone that we saw in Justice League. This could be a fresh take on the Flash! Or a horrible decision that sends the Flash to the DCU cemetery of rightfully cancelled movies.

Even though the teaser doesn’t reveal much about the plot, there are a few hints scattered here and there. The most obvious possibility is the Flashpoint storyline. To sum it up, the Flashpoint storyline is when Barry Allen goes back in time to prevent his mother’s death. In doing so, Barry Allen changes the entire future. Flashpoint is one of the most iconic storylines in all of DC comics, TV and movies. And one of the hardest to pull off on screen.

We’ve seen the animated movie Justice League: The Flashpoint Paradox do the story justice (pun intended), and it is one of DC’s best works. Whereas in comparison, The CW’s embarrassment of a show, The Flash, miserably failed in telling the Flashpoint storyline. Now, we might get the chance to see it on the big screen for the first time, hoping it doesn’t follow The CW’s The Flash’s footsteps.

Tackling Flashpoint for a first instalment for a Flash movie is a big risk, as it is the most important and iconic Flash storyline. As a movie in the middle of a storm, haunted by great expectations, doing Flashpoint could sink another DC character with big potential. More often than not, the “big storyline” and most popular villain are saved for the second movie. There are many reasons why, but speculation says it’s to make sure the sequel exceeds the first movie. Or because by the second movie the cast have understood the characters and world better and have higher budgets as well.

Batman’s involvement in the film strengthens the speculation of the Flashpoint plot, especially casting Michael Keaton as Batman. A Batman that’s older than Affleck’s, could be playing Thomas Wayne who is Batman in the Flashpoint storyline.

There are plenty of questions that remain unanswered, and we may not get the answers for a while. We are only given a glimpse of what the movie could be, and all we can do is hope for the best.

DC has fooled us a few times before; if we are fooled again, it’d still be “shame on them”. The Flash could be the demise of one of the most beloved characters in all of comic books, and the DCU as a whole. Or it could be DC’s olive branch to us, the fans, and perhaps give a lifeline to the DCU which is rapidly deteriorating. However, the new Flash suit does look pretty badass.

What did you think of The Flash teaser trailer? Do you think it will be one of DC’s better works? Let us know in the comments below or on our Twitter and Facebook!