Home » “Trickster,” is a Refreshing Interpretation of Irish Faeries 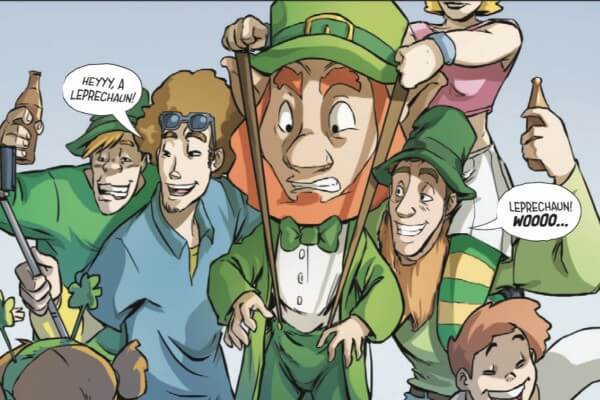 Back in 2013, Rob Thomas and Kristen Bell launched a Kickstarter for the Veronica Mars movie, giving fans a chance to revive a story that was cut too short. It also helped bring crowdfunding sites to light, thus giving creatives a chance to pitch their project directly to the public. Recently, Zoop has grabbed my attention for crowdfunding exclusively for comics, especially Trickster by Neil Gibson, Conor McCreery & Veronica Saraceno.

Trickster is about Rory, a leprechaun that runs a bar and helps people down on their luck using his powers with the help of his assistant, Fintain. I’m not sure what Fintain is, but they are definitely a supernatural creature. I didn’t have much to go on based on the sample I was giving, but it was both engaging and funny. It did end with a scary moment, but I wouldn’t consider this a horror series.
The characters were unique and easy to distinguish. This was due to their design, but it felt like everyone spoke the same except for Rory and Fintain. That might be due to the fact that most of the chapter was about them running away from an Irish mob. I will mention that some words are spelled based on how they are meant to sound as opposed to their actual spelling. Please note this comic uses the old English spelling for fairies, “faeries.” It might seem like a minor thing, but I’ve had to explain this in the past to many people not from the UK.

The panels and use of colors were excellent. Honestly, I would recommend picking this up for the art alone. It does its job, which is fine, but it’s not a masterpiece that you’d want to put up on your wall. It’s actually nicer than the cover options available on Zoop; that might be due to guest artists doing the various covers, which was a strange choice. It works in certain situations (such as The Simpsons couch gag), Not so much here. You want to show the art inside the comic on the cover, not another artist’s work.
The modern take on folktales and the supernatural is nothing new. We’ve had done to death at this point with American Gods, Charmed, Supernatural, Teen Wolf, and the list goes on. Trickster’s take is both enjoyable and interesting. I would highly recommend it if you can’t wait for MTV’s Teen Wolf movie or if the Charmed reboot isn’t scratching that itch. I’d also recommend it if you want to get something for a teen, it’s not overly violent but is still interesting enough to keep them engaged.

When it comes to Zoop.gg, I was happy to learn there was a new crowdfunding site exclusively for comics. This can give power to comic fans when it comes to publishing. It’s no secret that in the past couple of years, there has been an increase in manga sales while comic books and western graphic novels have been in the decline. This has caused Marvel and DC to pander to new readers that prefer manga while simultaneously alienating their long-time fans. Zoop has the potential to change that by giving the audience a say in what gets published and what doesn’t. However, in order for it to survive against Kickstarter and IndieGoGo, both artists and comic fans need to support projects on the site. Something I’m concerned might not happen, leading to great comics by new writers not being published.

Overall, I enjoyed Trickster. It’s definitely getting a second read this winter. If you’re looking for a new series to pick up then you need to back this project. There isn’t anything negative I can think of or say about this story, if you’ve read any of my previous reviews, then you’d know I always see the bad side.

Please check out and support Trickster on Zoop.gg. Let me know what you think below, or tell me what you think Fintain is? Sound off in the comments, or send us your thoughts on Facebook or Twitter!