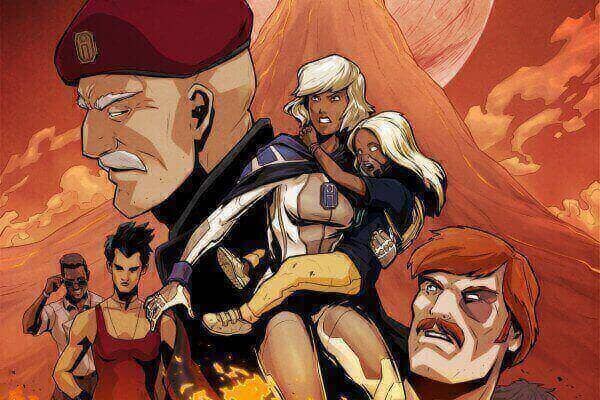 Writer Samuel Lewis and artist Dylan Shipley have come together to bring to life Volcano Island. Taking place in the future on a volcanic island with highly hostile conditions, Volcano Island is a story of survival! With the Kickstarter campaign coming to a close on December 1st, we had the opportunity to discuss the details of this exciting story with the creators!

Ap2HYC: What is Volcano Island all about?

Dylan Shipley and Samuel Lewis: In the near future a mysterious new volcanic island forms in the North Atlantic. Its shores are ablaze with toxic lava and the air is poisonous to breathe. Our story focuses on a mission to prove humanity can survive such a deadly environment to further our future planetary colonisation.

However, as day one thousand of the mission approaches unknown life forms start to appear, people’s minds start to alter, and the volcano looks set to erupt. It becomes a story of survival for the characters that remain. Can they escape? Can they even trust what they see with their eyes on Volcano Island?

Our Kickstarter is for the first issue of a five-part limited comic series. In this issue, we introduce the world and characters. The main event that happens towards the end of issue one will set up an exciting mystery with dynamic character development.

Ap2HYC: What sparked the inspiration for this story?

Shipley and Lewis: When deciding on the story we would meet for lunch to discuss our influences and projects we loved. Growing up we were big fans of anime, so Akira and Studio Ghibli were always key influences initially. However, we soon decided to have a setting where characters are forced together in isolation to deal with an external threat and to explore interpersonal conflicts.

To that end, we watched John Carpenter’s The Thing, Alien, and Solaris, which gave us a taste of the direction we wanted to head. When the setting of an isolated volcanic island hit, everything fell into place, regarding a mission to survive and an unknown sinister threat arriving from the planet’s core. We liked that it kept the action grounded on Earth, but the setting would have a really vivid look of oranges, yellows, and reds.

Ap2HYC: What can you tell us about the protagonists?

Shipley and Lewis: Pepper Rose is our main protagonist, she maintains a lot of the tech that protects the mission’s bases. She is a little cynical, has a problem with authority, and has doubts about the mission. In spite of this, she still feels a duty to protect her teammates and will do the right thing if pushed.

Maximilian Jones is the commander of the mission, he sees himself as a pragmatist, yet he has made some dark choices to keep the mission going. The guilt is eating away at him and he feels as if the secrets he is hiding are about to come bubbling out on this volcanic island. 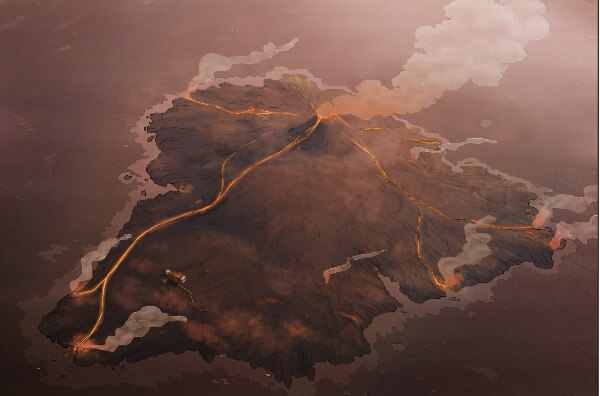 Ap2HYC: What art style would you say Volcano Island has and why did you choose to give it that style?

Shipley and Lewis: The style is trying to be quite a realistic one but keeping facial expressions clear and strong, with camera angles and details influenced by a lot of manga such as Akira and Vagabond even if the characters look more western in style. We want to be able to really show what characters are feeling so went to town on getting the facial expressions right.

We have also gone down a slightly 2D animation road for the colouring where characters are shaded quite flatly with more detail in the backgrounds, this helps to make characters pop out more from the pages. The artist Dylan works in animation so this style comes quite naturally to him.

Ap2HYC: What are some of the themes running through Volcano Island?

Shipley and Lewis: We set out to explore the difference between what kind of person someone thinks they are, against what their actions reveal them to truly be. Will someone who is brave act cowardly when put under pressure? Will a selfish person act selflessly when life and death is on the line? Our group of conflicting characters allow us to test and develop their thoughts and reactions.

Ap2HYC: How did you begin collaborating with the creative team?

Shipley and Lewis: We are old-school friends who have a big love of comics, animation, and video games. Over the years we tried getting different comic projects off the ground, but we never found the right story and setting. With Volcano Island we worked differently, we created the whole world in detail and developed the story and character backgrounds fully before a pencil touched a sketchbook or a single word of the script was typed.

Ap2HYC: Do you have any other projects you are currently working on?

Shipley and Lewis: Sam has completed the script to issue two of Volcano Island and is now working on the third.

If you are a fan of survival stories and science fiction, be sure to visit the Kickstarter for Volcano Island and check it out for yourself! To admire some of the beautiful artwork, you can also visit Volcano Island‘s Instagram page. Could you survive if you were in this story? Sound off in the comments, or send us your thoughts on Facebook or Twitter!