Home » “All The Places In Between” Loses Words For Emotional Impact 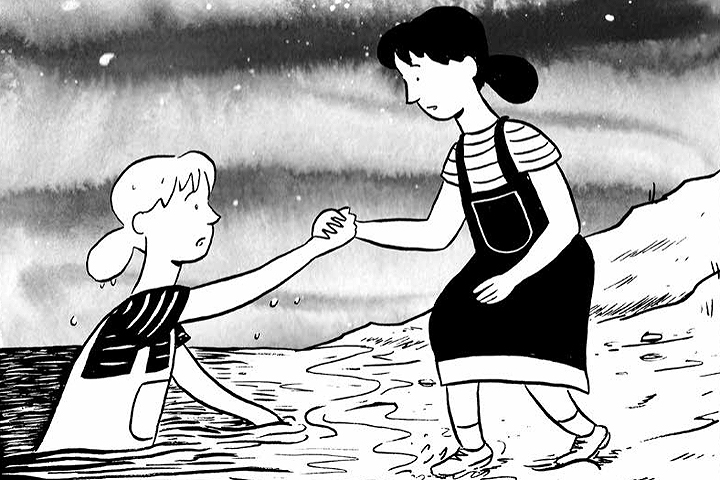 Too much exposition can easily tank film; a lot of dialogue can kill a comic book. All the Places in Between goes in the opposite direction. It has no dialogue, elevating the narrative and adding to the theme and tone of the story. This leaves the story somewhat up for interpretation. It also means the characters lack names. A child reading this will probably have a different takeaway compared to an adult. It also means you can buy this for a 5-year-old and they could read it on their own.

The story is set in an empty world and follows a lonely woman as she travels through this world. Without words, it adds a layer of loneliness and really tries to show her struggles. A sad plot with the lack of words adding to this. As far as characters go, the woman is fine for a silent film. We understand that she’s looking for someone to talk to and see the dangers she must face being alone. However, there isn’t much I can say; without dialogue, the only way the reader can understand her is through her actions.

The art makes it seem like this is a children’s book. However, its narrative deals with somewhat mature themes such as loneliness. Yet the style softens the tone and theme, allowing it to be more universal. They might see it as more of an adventure comic. John Cei Douglas, the author, clearly had a story he wanted to tell. Using his art as a medium to express that story. Usually, illustrators make small amounts of art, Douglas however decided to turn his hand at making a full book. A brave choice that kind of pays off.

After finishing this comic, I was thinking about who the target demographic is. While the art style is clearly aimed at children, the narrative leans towards a more mature audience. This made me think it might be ideal for teens but they’ll probably prefer to read the latest manga chapters. So wouldn’t this be a perfect book for parents with young children? That way the art can fill its purpose while giving parents a way to talk to them about the struggles of loneliness.

The only thing I remember that is similar to this is Journey, a 2012 video game with no dialogue. You played a character that was traveling to the mountains. As empty as it was, it had some really fun moments. This book reminded me of that game. The only difference is that Journey was an interactive experience while All the Places in Between is a linear narrative with no input from the reader.

Overall, All the Places in Between is a good read. I would recommend it for parents with young children. It’s a great way to get them into comics and start getting them interested even before they can read. It’d also be a great gift for someone you know who wants to go into writing/drawing comics or filmmaking. It may seem childish but it really has potential based on the reader’s perspective.

Liked this review? Want to checkout All the Places in Between for yourself? You can purchase it here. Let us know what you think over on our Twitter or Instagram!