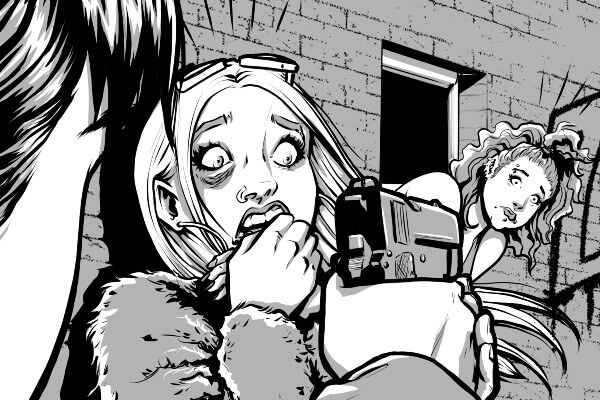 Home Free by John Kratky with art by Michelle Lodge reflects the chaos and the ambiguity of this day and age. This noir comic follows the story of Sara, a classic loner, and Emma, a young sex worker, as they journey across the United States to Mexico in hopes of finding their freedom. Kratky gave us the opportunity to learn more about Home Free and all we can expect from this noir road trip.

John Kratky: This series starts small, a simple meeting between two women who share a burden. Sara, our main character, left the life of sex work behind with the help of a stranger, and she aims to be that stranger for Emmy. Of course, you can’t just walk out the door when you have an abusive pimp stalking you. This is where the story takes off.

AP2HYC:  What were the inspirations behind this comic?

Kratky: 2020 was the inspiration. Seeing the entire world in pain and confusion was sort of terrifying. Although this comic is a personal journey for Sara, it is set against the backdrop of a world on fire, and she has to navigate her way towards what she perceives as freedom. Not so simple when there are so many divergent forces getting in the way.

AP2HYC: What can you tell us about the protagonist(s)?

Kratky: Sara is a woman with a broken past. She is a classic loner who has seen the worst in humanity so she knows how to survive. She is also a character from our previous graphic novel, The Black Wall. You’ll definitely be meeting a woman 10 years on from the girl in that story.

AP2HYC: What styles does comic artist Michelle Lodge bring to the comic? What style of art would you say the comic has and why did you want to give it that style?

Kratky: I’ll leave that answer to Michelle: I bring a realistic noir feel to the art in Home Free, with heavy shadows to enhance the darker mood of the comic. I used grey tones, deep black shadows, and a focus on the character’s expressions in order to really help give the story a visual mood. This mood fits perfectly with this dystopian world, where people and the situations around them are beginning to spiral out of control. 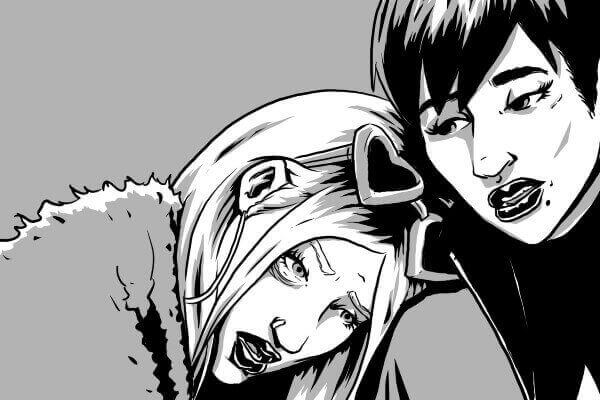 AP2HYC: What are some of the central themes in this comic?

Kratky: One theme in the forefront is a confrontation of the past. While Sara has separated herself from a life on skid row, she has never fully confronted and dealt with the trauma that stems from that life.

There are many themes that will resonate with readers, and I don’t want this to feel like a cop-out, but I’m more interested in learning what other people take from reading it. I’ve always felt that the least important opinion on a story is the author’s because that then solidifies what the story is all about when interpretation should be open.

AP2HYC: How does Home Free compare to your previous work, The Black Wall?

Kratky: Home Free is a sequel to The Black Wall, but, and this is a big but, Home Free was written to be read first and create a richer experience for the reader. Not a lot of people know The Black Wall as it has only been released as a webcomic, although it is available digitally on both Amazon and Comixology.

The Kickstarter for Home Free is a build-up to finding an audience who is interested in our work so that we can finally release the entire graphic novel of The Black Wall as one physical book.

It is hard to not get too long-winded in this response, but Home Free takes place 10 years later, and the political unrest is a reaction to events that occurred in The Black Wall. Sara is connected to these events and has never been able to face that.

AP2HYC: What drew you to the noir genre?

Kratky: Noir is mostly associated with film, though it is of course tied to comics history starting back in the ’50s with EC Comics Crime SuspenStories and others like it. It is a genre without boundaries in 2021 as you can call a black and white photograph of a lonely city street noir.

I fell in love with it through film, but moved to comics next, and I would say that the first truly noir comic I read was Watchmen. What drew me to it? Desperation, a cynical truth, characters having to face the consequences of their bad choices, & complicated characters. It is a rich world that can easily cross into many genres.

AP2HYC: Where does Home Free go from here?

Kratky: Issue 2 takes the road south from Oregon on the way to Mexico. It’s a road trip story that gets bigger in scope as it moves through each issue.

Kratky: Michelle and I have a pretty clear path. After the 5 issues of Home Free, and publishing The Black Wall, we plan to publish our next graphic novel which is fully written and about 20% of the art is complete. It is more dramatic crime fiction as that is what we do best together.

On a personal note, it’s time for me to find more readers interested in my work as I’ve been self-publishing for quite some time. I have two big dream project scripts (completed) that I would love to see the light of day, but I can’t do them without a larger base of people interested in my work.

One is a long-form horror anthology, and the other is a sort of modern western. Other than that my brain is always on fire with ideas, and I have two very different crime stories that I’ve been sketching in my notebooks for quite some time. Once the all-consuming Kickstarter is finished, I’m going on a writing bonanza until the next one starts.

Fans of The Black Wall and the noir genre are sure to enjoy Home Free. You can learn more about it at the Home Free Kickstarter page! To keep up with John Kratky and Michelle Lodge be sure to follow them on Twitter. Sound off in the comments or send us your thoughts on Facebook or Twitter!