Home » Horror And Mystery In “Lad: The Homecoming” 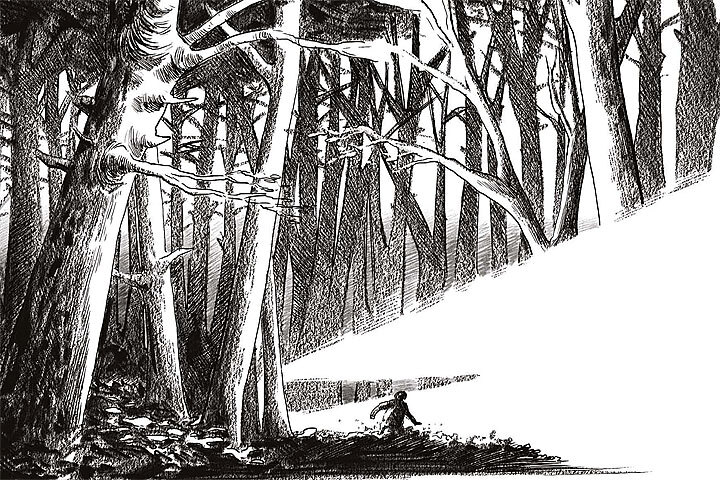 The first three issues of Lad: The Homecoming, written by Umar Ditta, are a very gritty tale of violence and bloodshed. #1 focuses on the abduction of someone allegedly called “The Hermit” by a gang called “The Family”. This Hermit is a being of darkness residing in “The Forest”. The leader of the gang is “Dad”. Found beaten at the edge of The Forest, his family swears revenge against The Hermit. “Lad” is a low ranking member of the gang who harbors the same sentiments as that of the rest of them. With guidance from the voice of Dad and beings that look like angels, he leads the graphic novel’s adventure.

In the second issue, he ventures into The Forest. This is something the Family are forbidden to go into, specifically the young members. Lad sees another vision in the forest. This time, it’s of a primordial figure who speaks to him in the woods. No one else can see these beings.  Within The Forest, Lad explains that he thinks he might have seen The Hermit once and watched him vanish. No one else has seen it happen. They never believe him; then and now.

#2 ends with Lad unconscious, dragged by The Hermit deeper into The Forest. Following after that, #3 starts with a flashback to when Lad first saw The Hermit. He terrified Lad back then. Now, when Lad has to face him again, he feels that same old fear creeping back up. Dad recovers enough to leave his bedside in this issue, swiftly leading to further complications for the plot.

The art style assumes the grittiness of the comic. It’s all sketchy lines with a black and white aesthetic. The facial expressions are very clear, with faces sometimes veiled in shadows in a manner reminiscent of noir films. There is a very interesting set of panels in the #2, juxtaposing events happening at the same time in different places; a clever bit of storytelling. There is also a slight supernatural bend to the it. Although, it is unclear whether the supernatural aspect is all entirely inside of Lad’s head or not.

The parts of the comic least grounded in reality come from Lad’s visions and The Forest. They appear to represent the primordial—something ancient. The Family are more grounded in the reality of a criminal gang. There’s also this insistence on order that Lad does not quite fit into. Clearly an outsider of the group, it’s not hard to realize that the others do not trust him much; they don’t treat him as a family should.

This comic manages to stay focused throughout. However, there is some confusion in the lack of explanation about the Family. The reader is expected to pick up pieces of information through context clues; a good-strategy-made-complicated by the focus on many different characters. Lad’s relation to the Family is fairly clear. But beyond him, things get a little bit murky. They’re all too busy trying to figure out who hurt Dad. It’s also unclear what the fantasy aspect has to do with the plot. This point is something easily fixed with more issues of to come. As we progress, things likely will clear up as the world around us becomes better fleshed-out.

Through Lad’s visions, we experience even darker shades of the comic’s message; he sees a separate world, one haunted not only by the monsters of humanity, but the monsters of our nightmares as well. Despite the eldritch horror aspect of this comic, it is clear that the writer intends the reader to think that the worst monsters of all are humans. Plagued by death strewn across each page; human beings cause so much suffering to others. In the end, the creatures of the nightmares pale in comparison to the devastation that people cause each other.

If you’d like to read Lad: The Homecoming, it’s available at Gumroad for your viewing pleasure. What do you think Lad’s visions are actually about? Sound off in the comments or send us your thoughts on Facebook or Twitter!