Home » “Sacrifice” #1 Has All Your Occult Needs 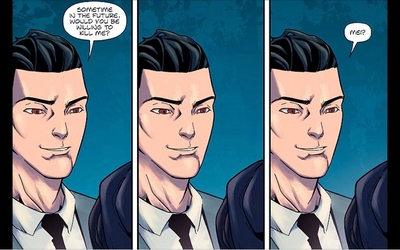 Laurent Valles Jr.’s Sacrifice #1 is quite an enthralling experience. Anyone well-versed in anime will understand when I say it’s very much like Yu Yu Hakusho with a little bit of an Inuyasha twist to it. Of course, the main character is your typical slicked-back, long-haired, and red-eyed figure. He’s one you’ve probably seen in many other occult stories involving demons and vampires. But there’s something more colorful and fantastical about the whole ordeal rather than morbid.

The story is one of prophecy—or something of the like. Damien – onomatopoeically similar to “demon” – as a baby was the supposed sacrifice to awaken Lucifer, hence the title. Fortunately, the archangels saved him before the ritual’s completion. Twenty-some years later, he now works as a paranormal specialist. He solves and investigates cases of other occults lurking within the human realm. Which is fitting, as a branch of his name ironically means “to tame” or “subdue” in Arab – and you can thank one Damian Wayne for that little factoid. Through one of his jobs, he encounters Mei, a college student tangled up in this uncanny mess.

Sacrifice’s appeal is all in its multiple layers of lore. There’s magic and ancient spell books, demons and angels alike, a mix of religious motifs and devilish plays; lines like “if God were still alive” and “Lucifer as he is now” pique curiosities. To be honest, they barely even scratch the surface of this whole fantastical world Valles Jr. has built. The main two characters themselves have such an interesting dynamic—a chosen spellcaster and the sacrifice banding together. Because of this, there’s a ton of foreshadowing. These are ironic, building off the comic’s tension, and can sometimes even lay as a foundation for humor.

Writing aside, Uj Chen, Ichsan Ansori and Lucas Gattoni help bring the project to life with their contributions in art, colors, and letters respectively. The illustrations of the angels and demons are quite fascinating. Despite not being inherently visible, there’s a certain aura to the angles. This is especially prominent upon their entry to the story; they come crashing through the glass ceilings of the church.

There are specks of light fleeting through the broken glass shards, allowing them to come across as rather heavenly compared to the demons and humans below them. This golden light carries to their wings when they fade into retraction. In contrast, the demons have a subtle red sheen to them. Both creatures are overly imposing in their own ways. The angels look like blessings coming from up above, and the demons are like Satan coming up from the ground.

I really do like Sacrifice. With an ending that is super intriguing, this first book makes me want to know more about Damien and how his relationship with Mei factors into all of this. There’s so much of the lore I’d love to see be explored as well; from the long list of occults, right down to the questions of how God died, and if we’ll ever see Lucifer awakened. These are questions I really need to be answered. And I’m not so sure if the planned six chapters for this arc will be enough to satiate me after all.

Have a taste for the occult? A fan of the tall, dark and handsome archetype? Maybe give Sacrifice #1 a try, and you’ll find more than your fill of everything mentioned above. You learn more about it on its Kickstarter page! When you’re done, don’t forget to clue us in on your thoughts over at Twitter or Instagram!