Home » An Interview with Jon Renzella: Author of Solitude 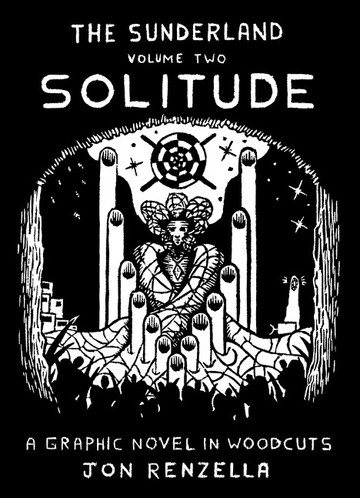 Jon Renzella’s bring us his second woodcut graphic novel, Solitude, after about 6 years of production! Having finished the first two parts of The Sunderland trilogy, Renzella recounts his journey to this point and what his plans are going forward with the trilogy in our interview with him. Here are his responses!

What is Solitude all about and what are the central themes that you are exploring through your story?

Solitude is the second part of The Sunderland trilogy and follows several subcultures that have physically separated from one another to live their own ideological truth unchallenged by conflicting worldviews. In the first book, Schism, a natural phenomenon called the Conduits appears that defies explanation, but each group is certain that it reinforces their preexisting beliefs. The story is a study of human society writ large, as well as the personal struggles that arise from cognitive dissonance.

What were the inspirations behind this graphic novel?

The graphic novel came out of an enormous woodcut installation I made in 2010. The woodcut is 8′ x 35’10” and covers the interior walls of a 9′ square room. It depicts a landscape in which multiple end-times scenarios play out simultaneously. Back in 2010, interest in the apocalypse seemed to be on the rise, with the recent financial collapse, the upcoming end of the Mayan calendar in 2012, the rise of social media, popularization of Alex Jones, and the ever-present religious prophecies and alien-related theories, just to name a few.

After completing the installation, I wanted to go back and explore how the moment of this landscape came to be, so I decided to make a graphic novel. Formally, it was inspired by the wordless woodcut graphic novels of Frans Masereel, Lynd Ward, and Giacomo Patri.

What is the graphic novel’s style of art and why did you want to give it that style?

The style is high contrast black and white and is an extension of my woodcut prints. The Sunderland books are often exhibited alongside my prints as part of a larger series exploring the human condition, and so are intended to be both stand-alone and a cohesive part of my larger body of work.

What can you tell us about the characters in Solitude?

There are many characters in Solitude, belonging to a few subcultures: the Military, banished from society following Schism; the Environmentalists, who live in an artificial natural paradise; a documentary filmmaker turned cult leader who believes alien reptiles are waging war against humanity; Children of the Plow televangelists, who anticipate the imminent arrival of a cosmic snowplow which will clear a path through the nonbelievers to the Kingdom of the Celestial Monarch.

In addition, the world’s most brilliant scientists who have abandoned the planet on their generation ship; the slightly lesser minds who work to discover the secrets of the Conduits; and of course the vast majority of society who don’t associate with any of these groups yet have been relegated to living in cramped conditions with their needs subordinated to those of the motivated and vocal few.

How does Solitude compare to your previous work Schism and fit into the overall Sunderland Trilogy?

Schism was about the fracturing of society, and Solitude is about the attempts to stay separated in the face of huge events. Each book is both a portrait and self-portrait, with Schism being made in my 20s, Solitude in my 30s, and the last book will be made in my 40s. I’m interested not only in how society evolves but also in how my relationship to society changes and hopefully matures.

Where does Solitude go from here going into Thermidor? Any thoughts or predictions of what is to come when you reach your 40s?

Thermidor is a reference to the late stage of the French Revolution when things began to return to a more pre-revolutionary state. Schism was a fracturing, Solitude was an attempt at stabilizing the fracture, and Thermidor will be a collapse back into a pre-Schism kind of situation. I’m trying my best not to think about the specifics of the story for the next couple of years until I turn 40, but I’m sure there will be plenty of inspiration forthcoming. We live in strange, exciting, terrifying, and wondrous times.

How has this trilogy impacted you personally?

Growing up, all I wanted to do was make comics, so this has been a lifelong goal achieved. Taking my own small place in the tradition of political woodcut graphic novels has also been fulfilling. Artistically, it has been great being able to work on such a long-term project, and I’ve also learned a lot both from researching for the story and from making hundreds of woodcuts restricted to the same dimensions.

Do you have any other projects you’re working on?

I’m working on my third large-scale woodcut installation, an investigation of emergent phenomena in nature (for example schooling behavior in fish, the structure of ant colonies, consciousness and the nervous system, cellular automata). I’m also working on an ink and watercolor sci-fi graphic novel with my wife, who is a neuroscientist.

Want to know more about Solitude? Check out how you can support this project, purchase the graphic novel, and get notified of updates going forward here. Keep an eye out for a review of this graphic novel coming out next week and sound off on both our Twitter and/or Facebook feeds and let us know what you thought about Solitude!