Home » Disney’s “Hercules”: Breaking Down the Inspiring Myths Behind the Movie 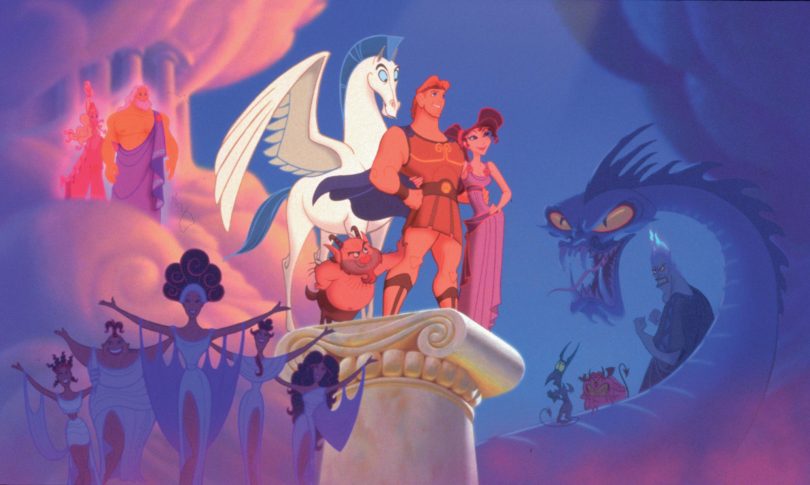 Hercules, Disney’s 1997 musical comedy is a great film, with memorable characters and toe-tapping gospel songs. It plays around a lot with the Greek myths it is based on, being a very loose adaptation. In this article, we will break down the movie and explore the myths that are playfully retold within.

Firstly, “Hercules” is actually the Roman name of the heroic figure, whilst “Heracles” is his Greek name. The character is a demigod, a son of Zeus, and considered the greatest of heroes in Greek mythology. He is best known for his twelve labours, being a member of the Argonauts, and defending Mount Olympus during the Gigantomachy. The classic Hercules is more of a short-tempered, often tragic figure, whilst his movie portrayal depicts him as a lovable, gushing goofball.

The film opens with the introduction of the Muses, the goddesses of the arts, who act as our narrators. The five present are Calliope, Melpomene, Terpsichore, Thalia, and Clio, though four of their sisters, Euterpe, Erato, Polyhymnia, and Urania, are excluded. They narrate the birth of the world, explaining that the rampaging Titans were imprisoned within Tartarus by Zeus, who came to rule Greece from Mount Olympus.

This origin story references the Titanomachy, an unseen, generational war between the Titans, the original rulers of the world, and their children, the Olympians. This was caused by Cronos overthrowing his own father Ouranos and then devouring his children. Zeus evaded being eaten, freed his siblings from his dad’s stomach, and waged war against Cronos and the other Titans.

In the film, Hercules is the child of Zeus and his wife-sister Hera, born a pure god until stripped of his divinity by Hades. This certainly alters the more dramatic origins of Hercules. In myths, Zeus was an adulterer who slept with numerous mortal women, birthing many heroes. Fed up with Zeus’ behaviour, a scornful Hera, committed herself to making Hercules’ life hell, resulting in the twelve labours he had to endure. Hercules had a twin brother called Iphicles, and was both the great-grandson and half-brother of Perseus, being another demigod.

On Mount Olympus, numerous gods make cameos, though wouldn’t get much screentime until the spin-off animated series. Weirdly enough, Narcissus is depicted as a god, who was a mortal in mythology. The designs of Zeus, Hephaestus, and Dionysus were inspired by their depictions in Fantasia.

Zeus gifts Hercules with Pegasus, the winged horse better associated with Perseus and Bellerophon. Pegasus is the son of Poseidon and Medusa, born when Perseus lopped off the latter’s head. Zeus creates Pegasus from clouds, which references Nephele, a nymph born from clouds, in order to act as bait to punish the wicked king Ixiom (long story!)

Hades soon shows up, and like most portrayals, he is a flat out villain rather than his more ambiguous depiction in myths. He travels to the Underworld to consult the Fates, travelling along the river Styx with the ferryman Charon, and feeds the three-headed dog Cerberus. Hades’ minions, the impish Pain and Panic, are based on Ares’ sons Deimos and Phobos, who personify terror and fear. The Fates control the lives and deaths of all via threads of life, cutting it with scissors. Their shared one eye comes from the Graeae, a trio of sisters who appear as old hags.

Pain and Panic abduct Hercules, removing his immortality, but fail to steal his superhuman strength. They then take the form of snakes to kill the baby, referencing how Hera tried to kill Hercules in his crib in the same manner. Hercules is adopted by farmers Amphitryon and Alcmene, who are his stepfather and birth mother in myths. He grows up to be a clumsy social outcast, until his parents tell him of his origins, sending him to the Temple of Zeus. There, Zeus materialises within his own statue, reunites Hercules with Pegasus, and sends him off to find Philoctetes to train as a hero.

Philoctetes, or “Phil”, is portrayed as a satyr and trainer of heroes. Phil’s role as a teacher comes from Chiron, the wise centaur, who taught everyone from Jason to Achilles. In myths, Philoctetes had the unfortunate role of lighting Hercules’ funeral pyre upon his painful death. He later gains notoriety for fatally shooting Paris of Troy.

Phil appears to live in the remnants of either the Colossus of Rhodes or the great automaton Talos. He taught other famous heroes, including Jason, Odysseus, Perseus, Theseus, and Achilles. Phil’s house contains several references to myths, including the golden fleece, the mast of the Argo, and the head of the Trojan Horse. Phil implies his heroes all died tragically, though both Perseus and Odysseus had happy endings in myths. Achilles’ iconic death involving his exposed heel is mentioned, depicted as Phil’s greatest shame.

After spending several years in a training montage, Hercules, Phil, and Pegasus set off for the city of Thebes. In myths, Thebes was founded by King Cadmus, who was on the hunt for his missing sister Europa at the time. On the way, Hercules rescues the lovely Megara from the centaur Nessus. Megara was Hercules’ first wife, but in a moment of madness induced by Hera, Hercules murdered Meg, leading to the undertaking of his labours to earn redemption. Nessus played a role in Hercules’ own demise, giving his poisoned tunic to Hercules’ second wife Deianira as a gift, which she later used to unintentionally kill her husband.

Meg’s indentured service to Hades doesn’t appear to have any direct source, but it may reference Hades’ romance with his wife Persephone – if you consider kidnapping and magical imprisonment to be romantic. She sold her soul to Hades to save her previous lover, but he ran off with “some babe”. There are plenty of scorned women in myths, so perhaps her boyfriend was someone like Jason, who abandoned his wife Medea for another woman.

Upon arriving in Thebes, Hercules is mocked by the jaded civilians. During this segment, we see statues of a manticore and sphinx, the victory goddess Nike, and Atlas, the Titan who holds up the sky. Meg takes Hercules to a gorge to rescue two children, actually Pain and Panic in disguise. Hercules battles and defeats the Hydra, the regenerating, poisonous river serpent, which serves as his second labour in myths. Hercules buries the monster beneath a landslide, though in myths, he only does this after cutting off and cauterising all of its heads.

This then takes us into the “Zero to Hero” musical number, which is chock full of references. Hercules fights several monsters, including the Erymanthian Boar, the Nemean Lion, a Stymphalian Bird, a sea serpent, the Minotaur, a griffin, and a gorgon (identified as Stheno in the animated series). He also appears to stop the eruption of Mount Vesuvius, and flies up to the stars, passing by the Ursa Major (and a constellation of Marilyn Monroe).

Hades plots to exploit Hercules’ weakness through Meg, making reference to Pandora’s Box and the Trojan Horse as notable forms of deception. Meanwhile, Zeus tells Hercules that his methods of heroism are incorrect, leaving our hero depressed. In this scene, several more references are made to the twelve labours – the walls are decorated with the image of the Ceryneian Hind, a golden deer protected by Artemis; Phil makes verbal reference to the filthy stables of King Augeas, and the girdle of Hippolyta, the Amazonian Queen; whilst the Nemean Lion’s pelt turns out to be Scar from The Lion King.

Meg helps Hercules escape his rabid fangirls, going on a date together to see a play about Oedipus, the tragic king who married his own mother. Hercules then inadvertently breaks the arms of the Venus de Milo whilst stone-skipping. During the wonderful song “I Won’t Say I’m In Love”, Meg passes by several statues depicting satyrs and centaurs abducting virgins, but also the romance between a winged Eros and his wife Psyche. Hades soon realises Hercules loves Meg, exploiting his feelings to remove his strength for one day, so he can free the Titans. This is nod to the Biblical story of Samson, who lost his strength when seduced by his lover Delilah, regaining it after praying to God.

Four of the five Titans introduced – Lythos, Hydros, Pyros, and Stratos – are all original characters, whilst the fifth is a cyclops named Arges. The Cyclopes sided with Zeus in the Titanomachy and forged Zeus’ lightning bolts. The Olympians prepare for battle, led by Apollo, who has a chariot pulled by flaming horses, referencing his role as guiding his sun chariot. Hercules defeats Arges by blinding his eyes, a similar technique that Odysseus used against the cyclops Polyphemus.

Hercules flies to Mount Olympus, where he successfully destroys the Titans by tossing them into space. Determined to save Meg, who is killed by the Fates, Hercules charges down to the Underworld, riding on Cerberus in a nod to his final labour. Hercules convinces Hades to let him dive into the Styx to save Meg’s soul. This is a loose nod to Orpheus, the famed poet who asked Hades to walk out of the Underworld with his wife’s soul, but this ultimately ended in tragedy. Luckily, Hercules succeeds by regaining his divinity through his act of true love, punching Hades into the Styx and becomes the true hero he was destined to be. He chooses to remain a mortal to be with Meg, but earns his constellations within the stars.

And that is just the movie! The midquel animated series, which took place during Hercules’ training days, features a large cast of mythological figures, including Icarus and Cassandra as Hercules’ best friends. However, the series may not be canon, since Hades did not know Hercules was alive at the time. Not to mention the series had a crossover with Aladdin that saw Hades meets Jafar’s ghost, and they joined forces to defeat their arch enemies!

Are you a fan of Hercules? If the supposed live action remake is made, what myths and characters would you like to see featured? Leave a comment below, or on our Twitter feed.