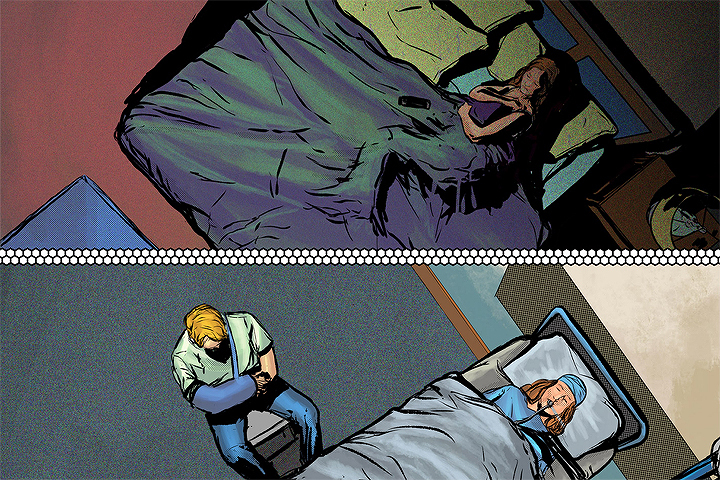 Ah, the multiverse. From Spider-Man: Into the Spider-Verse, to Venom: Let there Be Carnage, to Spider-Man: No Way Home, and now, the upcoming Doctor Strange in the Multiverse of Madness; it’s all anyone can talk about these days. However, there is something quite endearing in a story that takes the whole concept of the multiverse and grounds it. It’s that relatability, the higher emotional value of it, that really sells The Tessellation. Written by Mike Phillips, with art and colors by Hernán González and Javi Laparra, alongside letters by Julian Darius and Steven Legge; The Tessellation sees a series of different realities, the diverging roads and motifs of cars, to tell the simple story of a lost man. In this case, our main character’s family breaks apart by the seams due to his own doing. But the results are seen through the different iterations of one moment of impact.

James Beach, at least in one universe, is a mess of a man who likes drugs and booze. On a shopping day with his wife Corrine and son Nelson, a tragedy strikes their family, with three varying outcomes. In one, he’s the sole survivor. The devastation leaves him depressed and he wastes the rest of his life away with more drinks and substances. Another version of him sees his wife fall into a coma, an eye-opening experience that urges him to spend more time with Nelson. The third life has all of them survive and arrive home safely, but the marriage continues to break down.

There’s one more version of James though—a completely different man who seems to be well-put-together and has a daughter instead of a son. He uses the service E. A. which provides travel to a different universe, where he gets to go all out; commit crimes, have sex, and reap none of the consequences he should have. It’s an interesting concept by Phillips that piggybacks off of the popularity of the multiverse. But there’s something deeper going on here. It’s a moral dilemma of doing something because there are no consequences. This dissection of human nature is the core of The Tessellation and what makes the overall story so compelling to read.

Using time as a narrative structure, there’s a lot of retrospective storytelling in The Tessellation. The comic jumps through different points in time with flashbacks, present-day check-ins, and sometimes moments between the two periods. The repetition of panels allows for a really visual representation of the different moments leading up to impact. Using lines of hexagons, the comic abruptly separates the different points of time. This fits somewhat to the aesthetic of the title, as well as the premise of the comic. But these elements don’t provide the best transition from scene to scene. However, because the panel structure is so simple, these repetitive sequences don’t overcomplicate things. Rather, the uniformity of it all allows readers to see patterns in the chaos provided.

Simplexity is key overall; creating calm in the madness surrounding us. Still, there are a lot of questions left open here, about what E. A. really is, the morality of doing something because there are no consequences rather than doing it out of want and need, and if regret after the fact can really change anything at all. We’ve all ready sci-fi stories that are very human at their core with the themes they explore. But The Tessellation is different in that, while there’s a very scientific edge to it, it takes a backseat to the true story of the comic; the story of family, regret, and being a good person.

Want a multiverse story that’s a little more grounded? How about encountering the other-self in a whole different direction? Try and give The Tessellation #1 a read. You may just find yourself wondering, would you do something if there were no consequences to your actions. Let us know all your thoughts on Twitter or Instagram!