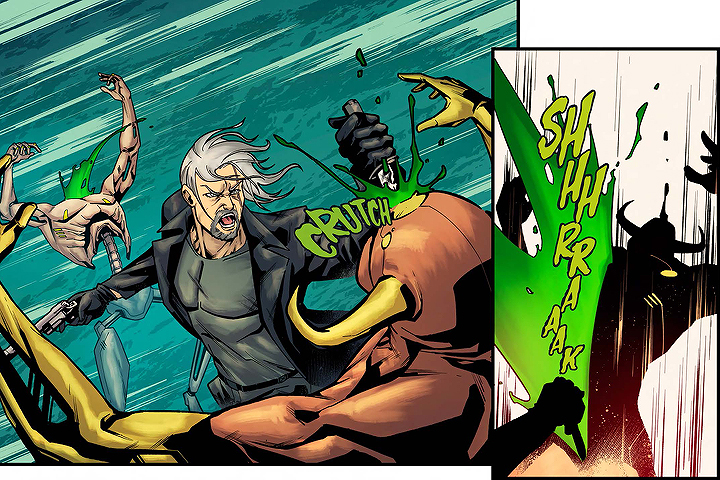 Sacrifce #2 doesn’t disappoint at all. I will argue and say it might just be even better than that hell of an opener in #1. Laurent Valles Jr. comes back to further the story, add more lore and occults, and somehow raise the stakes even higher. This second issue, we learn more about Damien as a sacrifice, with new characters introduced – even encountering some old ones. Valles Jr. also works on the world-building, giving readers an understanding of the structure of this magical world. The same players are back in the production of this issue, with Uj Chen once again on illustration. Ichsan Ansori remains on colors, as does Lucas Gattoni with the letters.

Opening with also another bang; #2 introduces us to Damien’s band of misfits in Devil’s Advocate. There’s the demon slayer Axel Van Helsing; a brutal human with lifelong knowledge on how to off demons in the most violent of ways. Elizabeth is a vampire bitten by Dracula herself. She has an extensive past with Damien – as hinted through dialogue – but there’s not a lot of information on her. However, Valles Jr. does a really cool thing with her characterization; he fleshes her out through her interactions and dynamic with the other characters. You can tell she’s close with Damien because he’s the only one she allows to call her Liz; her relationship with Axel isn’t the best because of their constant jabs at each other.

Often times, when writers allow other characters to define an individual character – most specifically, female characters – they end up coming across as half-hearted, leaving no room for agency with that specific character. In this case however, the technique adds more mystique to the character without completely overriding her individuality. Other new characters include Josh, a demon who remains on the neutral side. This little bit of world-building expands on how not everything is just black and white in Sacrifice. Uriel is also back, from the early beginnings of #1; his presence extends the continuity of the prophecy, but also showcases the immortality of the occults. Even the demons have personalities; it’s fascinating to see the demons interact with their masters and each other. These amusing interactions ground them; from just being monsters, to something more tangible and realistic.

The same applies to the Devil’s Advocate crew. You only get to know these characters and their dynamic for a couple of pages. But their relationship with each other is amusing enough and opens up to a lot of humor. Their interactions are very enjoyable to read. This in turn makes the little tidbits of information sprinkled throughout the dialogue come more naturally. Just by their sarcastic comments to each other, you’ll learn a lot about who these characters are. Like how Axel used to be in opposition of Damien and now they are allies; or how many bloody jobs Damien takes because of his decreasing number of clean coats. It’s exposition for sure, but it’s smoothly-incorporated exposition nonetheless.

Visually, #2 uses the same color filter and palette as #1. This allows the series to exude a set atmosphere and feel, as well as synergy between the two issues. There’s something uncanny about the character designs as well. It makes everyone Mei meets – whether it be face-to-face or just bumping into them on the street – come across as suspicious. You as the reader become high on alert, and sometimes, you’re right to be so. The only real complaint I have about Sacrifice so far is how weak the antagonists have been. There needs to be stronger players in the story opposing Damien. I’m guessing that’s the direction Sacrifice is heading to anyway. So, this small comment won’t matter much in the grand scheme of things.

Overall, Sacrifice #2 extends the story further and adds more fun and flavor through lore, occults and characters. The story is constantly expanding, and I can’t wait to see how that little cliff-hanger in the end plays out with the rest of the religious themes of the series.

Been keeping up with Sacrifice? Is this your first time reading about it? Check out our review of Sacrifice #1! And if that’s not enough to satiate all your occult needs, you can check out the full Kickstarter for Sacrifice and get the latest news on the next issue. When you’re done, don’t forget to clue us in on your thoughts over on Twitter or Instagram!