Home » “Shark of War” #5 Is An Epic, Bloody Conclusion 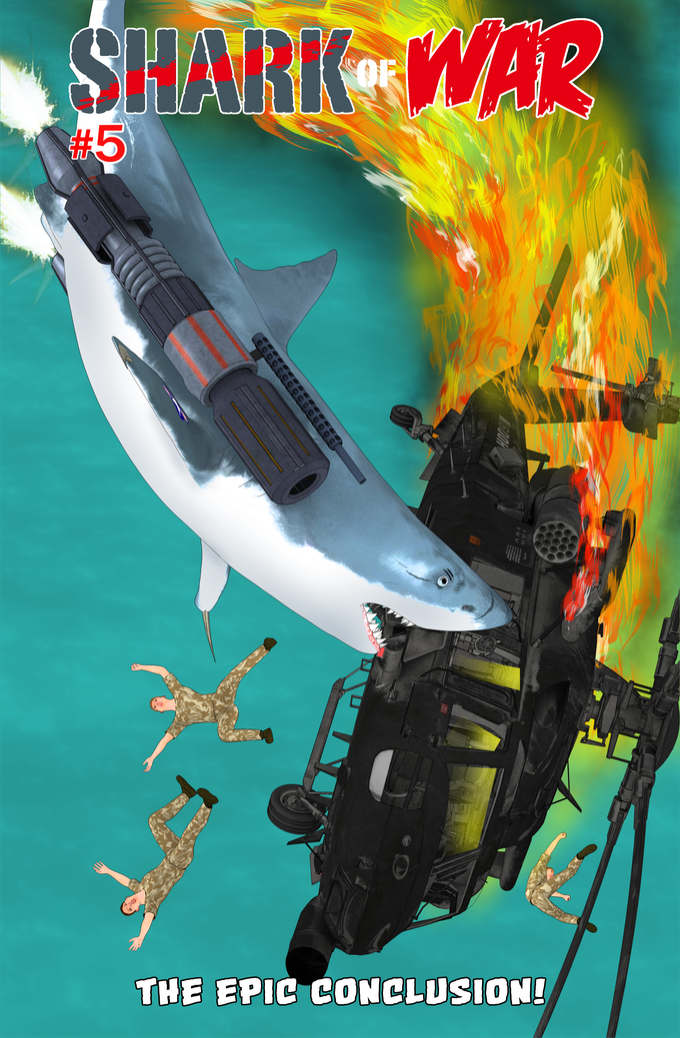 Shark of War #5 presents the epic conclusion to USS Gnasher’s quest to protect US waters from the coastal drug ring. In this final battle, our maneating protagonist must face one of his creators and her newest experiment. Gnasher is a bioengineered shark of an “aquatic soldier”. After a severe propeller injury, he finds allies who have a similar mission to his own. Creator Ben Lacy creates a whole new genre with this series. Essentially a blend of everything with some nostalgic B-movie campiness; Nikki Powers letters this Shark of War #5 under Biting Comics’ publication. Lacy is an engineer for 30 years with degrees in nuclear, aerospace, and mechanical engineering. This ensures that some of the deadly innovations in bioengineering sound realistic. In summary, he calls Shark of War he states “Jaws meets Robocop!”

To quickly rehash the first four issues, USS Gnasher executes a Django-level of justice across the coast under the AI directives of his creators Dr. Raye Fischer and Dr. Brooke Douglas. That is until, Douglas betrays Fischer as she is in cahoots with the cartel. The former attempts to kill Gnasher but fails and flees. In an attempt to enforce US laws, Gnasher comes face to face with Douglas’s newest experiment, a swarm of cyber-pirahna. In the wake of his bloody journey, Gnasher encounters both Marisa and Daniel; a brother-sister pairing that constantly comes into contact with the cartels. The duo and Gnasher save each other all throughout the previous issues, building an alliance. Soon after, Gnasher comes in contact with both the U.S. Military and a hologram of Fischer. These new allies all help out in this epic final battle.

Shark of War #5 definitely gets right to the point. That is to say, it gives the audience the final confrontation that they’ve been waiting for right away. Firstly, Gnasher is badly damaged but has a few upgrades in his back pocket. This helps the fallout go down without giving too much carnage candy away. Which is definitely something that Lacy does not hold back on. Secondly, the digital 3D art in Shark of War has always been stunning. This edition is no different. There’s blood and guts everywhere in this aquatic, aerial, fin-to-hand combat.

Overall, #5 builds up to a cliffhanger that leaves room for plenty of sequels! The question is, will USS Gnasher make it out alive to be a part of the possible next chapter of Shark of War? In conclusion, this newest edition of Shark of War gives the readers exactly what they want. And it’s all in the trappings of one climactic battle. Hopefully, this is not the last of this storyline. Because there’s so much more that Lacy has to offer in this world of his!

If you want to know more about Shark of War #5 you can check out their Kickstarter right here! Sound off in the comments or send us your thoughts on Facebook or Twitter about Shark of War and help us continue this bloody fun adventure!