Home » Finding the Soul of a People in “Seis Cuerdas: Defender of Mexico” 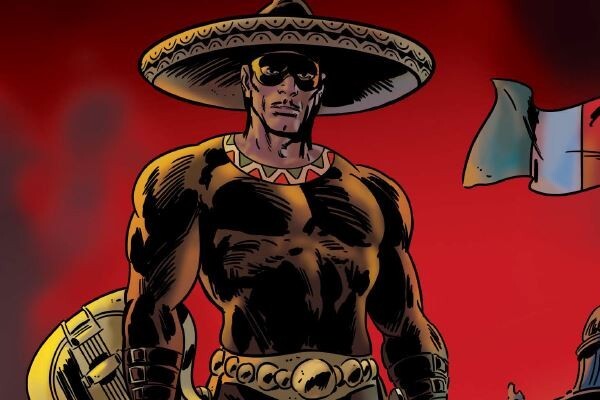 Seis Cuerdas, written by Anthony Rella and Benito Gallego, is a story about Mexico. That is to say, who fights and defends Mexico? #1 introduces Dantes, a superhero, first shown rescuing a man from a train. The threat of violence is not far behind. These come in the form of cultists bent on human sacrifice. Dantes decides to take up the mantle of a hero because no one else will. This thread traces throughout the entirety of the comic.

Most of the plot focuses on Dantes trying to stop a group of children from being murdered by the cultists. There are several side characters as well, all focused on giving a voice to the people of Mexico. In the second issue, Dantes becomes involved in a Cartel war. He meets Lara, and also Marta and Javiar, who become important side characters. The third issue follows Dantes’ attempt, now working with Lara, Marta and Javiar, to rescue the missing children.

This comic book has a very detailed art style. Firstly, it’s fully in color and there’s an emphasis on design based on the late 90s and early 2000s. Secondly, the movement and facial expressions are very dynamic, allowing the colors to come across as incredibly vivid. The story is interesting and engaging as well, with a focus on a small cast of interesting characters. If there is anywhere this story struggles, it is with the scope of the project.

Dantes focuses on a fairly small goal which is to rescue kidnapped children. But the story extends far beyond that into rescuing the very soul of Mexico. It is an ambitious plan, and works well for the most part. Although, the repeated warning about government corruption plays almost no role in the actual plot. Along with this, the presence of Santa Muerte is interesting, but never well explained.

Seis Cuerdas is a reimagining of the superhero story. It focuses on a more marginalized group of people in an area that has not had the opportunity for a hero of their own. Pride for Mexico is evident, carried by characters such as Dantes; they do not let circumstances drag them down. The theme of who fights when everyone else is silent also runs as an undercurrent through the entirety of this story. As is often the case in superhero stories, this theme triumphs in the end.

Seis Cuerdas does not shy away from depicting the horrors that violence inflicted by greed. Cultists Daniel and Romero stand in direct opposition to Dantes and the people who help him. Their selfishness in contrast to the selflessness of the heroes is stark. This is something the comic heavily condemns. Unity and extending an open hand to those who need it are important themes of the narrative. Ultimately, Seis Cuerdas is a story that reclaims Mexico for the people.

Seis Cuerdas #1 is available for free at Source Point Press, with issues two and three available for purchase. The comic can also be bought at major bookstores like Forbidden Planet. What adventures would you like to see next for Seis Cuerdas? Sound off in the comments or send us your thoughts on Facebook or Twitter!