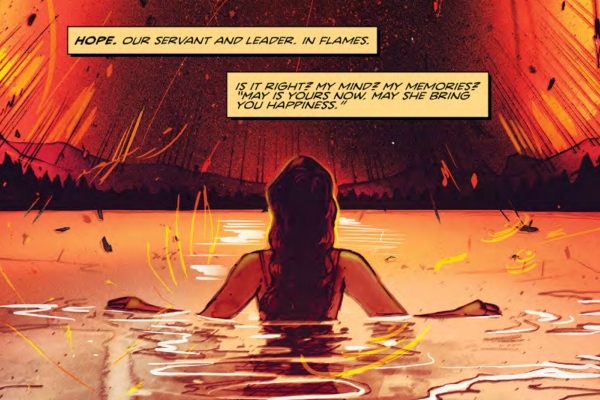 Reburn, written by Alyson Shelton with art by Elise McCall, is the story of May; a woman in the near future who quickly begins to question everything around her. She lives a seemingly utopic life, despite feeling trapped in it. And then, visions of her mysterious past, a forgotten family, and burning transports falling from the sky abruptly interrupt her peaceful but complacent life. Forced to take charge; she has to figure out both who she is and what is real. In doing so, she comes closer to unlocking her heroic past.
A lot of the story in Reburn is initially unclear, to great effect. The first issue does a great job of disorienting the reader in a way that matches May’s disorientation. It certainly gives you more questions than answers. This can be frustrating, but otherwise produces the great effect of aligning us with May; it makes readers immediately sympathize and root for her. May’s struggles are realistic and upsetting for this reason, just as her triumphs are cathartic and exciting. The character work makes for a very strong set-up to the protagonist.
Despite having the premise of a more action-packed series, Reburn refreshingly opens in a much more cerebral and reserved way. Well-paced, and despite a lack of action, the opening is thrilling throughout. Confined to a gorgeous but empty underground living space; May is unsure of why, and if she will ever be able to leave. Although she isn’t alone, Grey – the man living with her and supposedly keeping her safe – is so much more than what he seems. As tensions rise with May forced to take dramatic action; the decisiveness drives the story to some intense developments.
Reburn is full of absolutely gorgeous artwork. For starters, the character art is stunning! Incredible and emotive pose and expression work to highlight the character-driven story-telling and emotion. There are a number of pivotal scenes in the plot made even stronger by the striking colors and composition of the panels. The colors of the background seem to shift to match the atmosphere; they turn red in the tense moments of the comic, or purple as things become mysterious or ominous.
Reburn stands out with a strong start as a comic with great art, a captivating premise, and a strong and relatable protagonist. I’d recommend giving the first two issues a shot and supporting its creative team on Kickstarter.

Be sure to check out Reburn and its first two issues and let us know what you think! Purchase details are available on its Kickstarter page and website. Sound off in the comments or send us your thoughts on Facebook or Twitter!