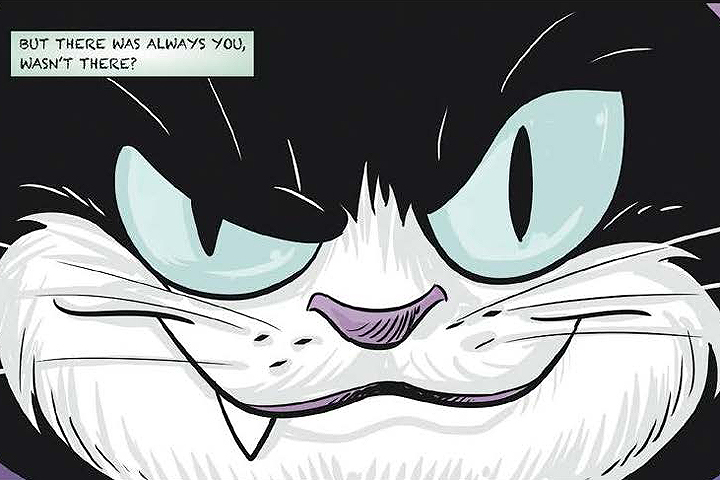 Anyone who has ever seen Cyborg Kuro-Chan knows what reading Chrono Cat by Stu Perrins is exactly like. The two have the same vibe. Although, the latter does have a little bit of a Loonatics Unleashed twist to it, alongside some multiverse and time travel shenanigans. The story stars Chrono Cat – once formerly known as Charlie; he’s dubbed as the “world’s first feline science superhero”. With his trusty lab-sidekick Hoops, he uses time travel to fix messes created by animals in all different realms, planets, universes and time periods. Like with every sentient animal protagonist, they always got to have their own mad scientist supervillain – who may or may not be part of their superpower origin story. Chrono Cat also has one; except his is a talking goldfish. More on that later!

The graphic novel opens with fantastic introduction using narration. This really preps the reader for something big about to happen before undercutting it with the image of our protagonist for comedic effect. Narration in general plays a lot of the strengths and pitfalls of Chrono Cat as a whole. Perrins works with artist Armando Zanker to ensure dialogue and narration beats time with the visuals. For example, the single word “dark” occurs on a full black panel. This is also present through separated narrative boxes, creating rhythm when reading through the comic. Something about this technique keeps certain pages fresh and interesting. It also allows for magnificent visual comedic timing. On the other hand, it drags the narration to several pages. This results in something long and drawn-out in the most boring of ways.

Sixty-plus pages is a lot in comics—there are so many things that can happen contained within those pages. Look at manga; they only have thirty pages per chapter. Yet, most of them still pack a whole lot of events within those select pages. Which is why it’s disappointing that because of the incessant need to time the narration with a visual beat, a lot of the pages end up being time skip fodder and montages. There’s not much actual action and events—just a timeline of things happening in narration and drawings. While the technique works in certain instances, there needs to be some kind of balance applied. Maybe in general, there just needs to be less monologues and narrations.

There’s a lot of funny shenanigans with Chrono Cat’s ironic sarcasm and monotone delivery. This is also an excellent way of dispersing exposition and world-building; his little quips paint a picture of the world he lives in where animals create constant peril. That said, Chrono Cat isn’t free of the curse of blatant exposition. For example, there are a lot of convenient exposition placements. Again, I put this on the narrations and monologues. While it makes sense, it doesn’t transition quite as naturally. The good thing is, there is something quite meta about a villain’s monologue expositing the entire background adventures of Chrono Cat and his goldfish nemesis, Luther. Perhaps Luther is named after Lex Luther? Anyway, the monologue is something even Chrono Cat himself calls out.

Speaking of Lex Luthor, the whole book has an abundance of superhero references to marvel in. For example, Chrono Cat’s red, blue and yellow don is a nod to classic superhero colors worn by the likes of Superman, Spider-Man, Captain America and even old-timey Batman. Texts also take subtle jabs at these superheroes; Chrono Cat using a circular bin lid as a shield/boomerang, and referrences to Batman and Superman’s mothers names as Martha. The blue color palette by Ron Gravelle for the environment and backgrounds represents old desaturated comic pages. This is one of the visual positives of Chrono Cat, alongside the simplicity and detail of the character designs. Chrono Cat in particular is quite basic, but unique to himself. I especially like his white streak of hair that keeps him individualized from any common house cat.

Like with any time travel stories, Chrono Cat leaves a lot of messy plot holes in its wake. But that’s a given when tackling such a complex subject. I do like the how they connect time travel with evolution; of animals evolving far greater than their current physical and mental capabilities, and humans regressing back to their ancestral fish stage. But really, at the heart of it all, Chrono Cat only has one lesson to teach: “You make the best of what you got in this world. You can’t spend your fault blaming others”. It says a lot that even in a short story contained within sixty-plus pages, you feel a sort of attachment to Charlie. You genuinely feel sad when he makes the decision to change his past for a better future. Almost in the same levels of “everyone in Spider-Man: No Way Home forgetting Peter Parker exists” sad.

What are your thoughts on feline superheroes? Love them or hate them; this one in particular is here to stay! If you want to read more about the story of Chrono Cat, you can peruse over at Markosia for its purchasing details. Just be careful not to get too attached! If you do though, we’re here for you so check us out over on our Twitter and Instagram!