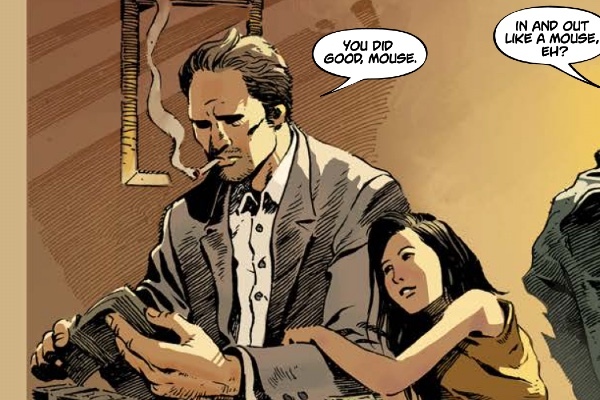 Gun Honey is an action-noir comic. Written by Charles Ardai with art by Amy Hor Kheng; the story centers around one Joanna Tan. Known to the criminal underworld as the titular “Gun Honey”, she is not just a pretty face. At first glance, she may seem like just another spy or assassin. But it’s very much more than even just that. Using her stealth, smarts, acrobatics and charm, she smuggles guns to other assassins. This therefore earns her the title that she wears with pride. Trained by her father from a young age, she once used these skills, her small size and unassuming appearance to run jobs for him. Now as an adult, she seems to have it made.

However, things change for Joanna when a very dangerous client approaches her: the U.S government. As a result, she is forced to call into question who she is and why she does what she does, despite her strong reputation and comfortable position as a world-renowned criminal. Because of these interesting themes and hooks, just a few short pages of Gun Honey can thrill. As the final page rolls around, readers are left craving for the next issue. Furthermore, the action – mostly of Joanna stealthing around, infiltrating operations, and playing it very, very cool – is exceptionally well-drawn with a very strong pace and flow of movement. It’s invigorating, and very much like watching an infiltration scene in a film. Seeing her sneak about and hide in plain sight is so exciting! With such an interesting and skilled character, there are no shortages of wild scenarios for Gun Honey.

Overall, the art, writing and tone radiates style. I can practically hear the jazzy/funky soundtrack playing in the background as I read along. Everything about this graphic novel screams noir or pulp action films. It creates a similar atmosphere to spy films, and elicits feelings of excitement and familiarity. Yet still, the approach to the genre is unique with its premise. I’m sure in future issues, the stakes, excitement, and homage to this style of story will only ramp up. Going forward, I hope to explore more of Joanna’s past and upbringing. There’s still a lot more ground to cover; the morality of this character, how she’ll move forward from here on, and the effects and tolls of this particular job.

As it stands, Gun Honey fires off with a bang in #1. It’s a fun and enticing start with more sure to follow.

How do you like this cunning and stealthy femme fatale? Interested in the story of Joanna as Gun Honey? #1 and onwards are available at Titan Comics and other major bookstores such as Forbidden Planet. Let us in on your thoughts about the comic via Facebook or Twitter!