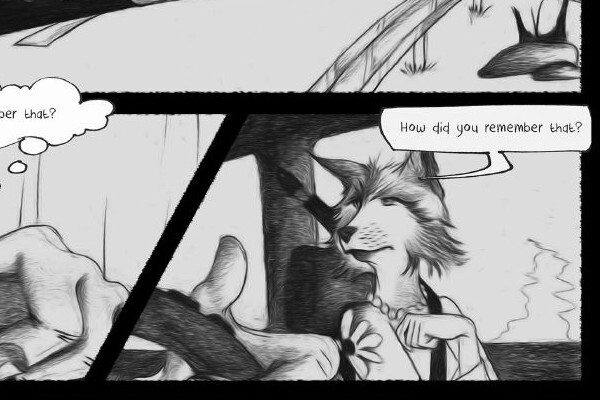 Fairy Tale, written by Ziad Semaan and Andres Prieto Spool, has more in common with the dark, twisted fairy tales that stories are based upon rather than the happier fare that people are more used to today. It tells the story of Freya and Paul, a married couple, and the hitchhiker Owen that they pick up. The graphic novel has a surrealist edge to it which the art style lends itself well to; examples include anthropomorphized wolves which give the story a primal feeling. It starts with Freya and Paul alone in a car. They’re on a road trip to the first place they stayed together at. The reader feels a creeping sense of uneasiness as their conversation careens through many different avenues of thought. This feeling becomes more pronounced once Owen shows up. He leads the three of them into the woods to look for his lost girlfriend.

Often times, the characters’ designs are not very far off from the animals which they are based on. This is a theme that the story intentionally plays with. Several fairy tales recur throughout the book; the story of Bella, a woman whose skeletal remains are found in a tree. The details are gruesome, and the book often compares this woman Bella with Freya. There are also mentions of Lily Mae, a child who never grew old. Women and girls feature predominantly in this comic; the twisting stories of Bella and Lily Mae wrap around the tale of Freya, Paul and Owen.

One of the themes explored by Fairy Tale is separation. Freya and Paul frequently mention their daughter Liv, who they left home alone for the first time. Their anxieties as parents combine with the anxieties that the setting and the story itself produce. This book also explores more uncomfortable themes, such as sexuality and abuse. There is no easy way to understand what is going on, and Fairy Tale does not attempt to make it easier to understand. In some ways, this is detrimental. But the ambiguity of the plot works with the established setting.

There is also no clear reason why the characters are not human when the story itself is so very human. But the anthropomorphization gives this book character; it evokes a sense that there is more to the story than what we read. But it leaves off on a vague sense of ambiance that there is no way to know for sure. Despite this, Fairy Tale works on many different levels. There is no reconciliation at the end, or any sense that the plot has been fully resolved. This leaves the reader feeling – if not dissatisfied – at least a little shaken. Given the scope of the book and writing, I will say that this feeling serves the story very well. Fairy Tale is meant to make you feel uncomfortable; it is not the kind of story with an easy ending. And that is okay sometimes.

What fairy tales were you expecting to read about? Fairy Tale is available for purchase on Buy Small Press should you like to check it out! Make sure to sound off in the comments or send us your thoughts on Instagram or Twitter!