Home » The Narrators Have Had Enough: “Establishing Shot” Is A Parody On Comic Narration Tropes 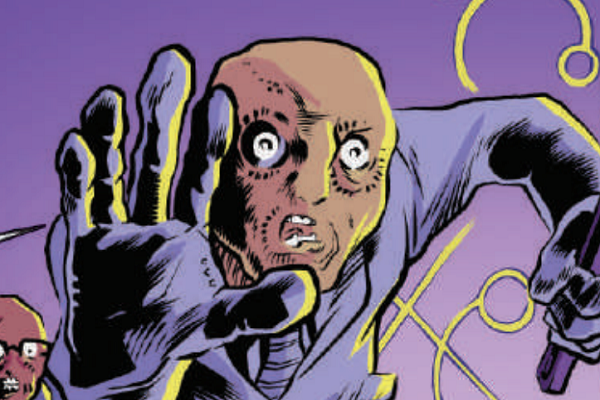 Has it ever crossed your mind that the narration blocks in comics might be sentient? I mean, there has got to be a narrator behind them, right? Or what about the exclamations in the middle of action sequences? Do the heroes really see every “BOOM”, “KAPOW”, and “BLAM”? Well, Establishing Shot answers these questions in a comedic fashion! Through six separate stories, the hilarities of old-time superhero comics come front and center. The narrators will complain about interrupted scripts and the mistakes heroes make – all in the name of good fun.

Establishing Shot comes in at a total of forty-four pages with six individual titles; “Elsewhere in Manhattan!”, “Bulwark Beatdown!”, “SFX In The City”, “The Weak Link”, “Short Supply”, and “Crook’s Rest”. They’re about four to six pages each, all following different characters and stories. However, the comic features something interesting. Three of the comics are in bright, vibrant colors, while the other three are monochromatic in black and white. After you read the color stories, you have to flip the comic upside down for the black and white ones! That’s not something you see every day.

Every story is unique in its art style and presentation. That’s because different writers and artists have worked on each one. Each of them bring in new perspectives to the forefront. But they are all connected by an overarching theme – addressing campy superhero tropes. Some of them feature omnipotent narrators laughing at messy heists and proclaiming that they don’t have good philosophical commentary on the cycle of violence. So ultimately, it’s a parody on narration in superhero comics—and a funny parody at that! It makes me want to befriend some of these narrators. But alas, they’re just words on a page.

I have a friend who swears that narration is a crutch in most media. “You shouldn’t have to explain your world to the audience and it should come naturally through the storytelling”, he would say. I think this comic proves him wrong in a lot of regards. Sure, some people really hate narration on top of their movies or comics. But Establishing Shot showcases how narration can be both a necessity and funny. In many of the chapters, the narrator is the sole source of plot. Sometimes even, they’re a character that can be addressed! There are also moments where the narrator directly interferes with the plot or makes sarcastic commentary. I mean, how many times have you read a story where the hero makes a stupid decision? Narrators get to witness that first-hand, over and over again. They’re bound to notice the repetition!

But my favorite of the chapters is the third one, “SFX In The City”. There’s no narrator per se, but there’s another cool feature that’s instantly recognizable. In this story, a city is bombarded by SFX statements. A huge “KRATHOOM” takes on a physical form and crashes into an ice cream truck. All the while, “HONKS” and “BOOMS” float around the city. It definitely gives me 1960s Batman vibes, and the build-up is awesome! They even include a disclaimer at the end that “no humans, animals, or remaining members of the Beatles were harmed in the making of the comic”. Does that last part sound out of place to you? It won’t if you read it; I promise there’s context!

Establishing Shot is an innovative collection full of humor, and just a dash of violence for good measure. Though each chapter is fairly short, there’s lots of action packed in, and plenty of reasons to laugh. Because of its satirical nature, you should be aware that this isn’t the kind of comic that’ll scratch your worldbuilding itch. Each story is an extremely small snippet into a basic world; it places most of its emphasis on narration rather than dialogue and character interaction. But if you’re looking for something short and sweet, this is the anthology for you! It’s pretty funny, and the subversion of the narrator trope even gets more than a few chuckles out of me. I know I let out some during the Santa heist. And yes, I promise there’s context for that one too!

What did you think of Establishing Shot? If you haven’t read it yet, Establishing Shot is available to purchase on Gumroad at £8, which is not a bad deal for six short stories! It’s also available to read on its official website. They’re free over there, but the stories are all separated. Plus, you won’t get the novelty of flipping the book upside down for the black-and-white stories!  Which one of the six chapters was your favorite? Let us know in the comments or send us your thoughts on Facebook or Twitter!