Home » “The Thing On The Doorstep” Is A Magnificent But Terrifying H.P. Lovecraft Adaptation 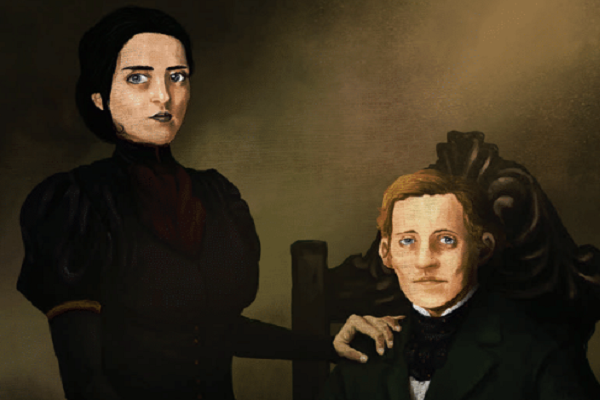 In 1933, H.P. Lovecraft once wrote The Thing on the Doorstep – the newest addition to the Cthulu Mythos universe of the American writer. Its story follows Daniel Upton, a respectable young man who ends up killing his lifelong best friend, Edward Derby. What has brought Daniel to this point; why would he ever perform such a horrific act? This classic horror story is given new life in this comic adaptation of The Thing on the Doorstep.

Part 1 comes in at forty-four pages of content. Since it’s a Lovecraft retelling, there’s no shortage of creepy vibes and horror story elements. We follow Daniel Upton as he meets and befriends Edward Derby. The story recounts their early childhood, their young adulthoods, careers, and eventual marriages. As the first part of the series, Part 1 sets things up through Daniel and Edward’s years of friendship and differing personalities. However, in the first three pages, we see Daniel shooting Edward in the face. It’s a magnificent cold open that ingrains certain questions in the back of the readers’ minds.

What could’ve happened during their extensive friendship to cause this sudden betrayal? This initial question somewhat gets an answer. In the later half of the comic, Edward meets Asenath, a young dark-haired woman who’s a “weird one”. In their first meeting, she controls a storm and hypnotizes Edward. But his interest in dark and gruesome topics means he’s more curious than terrified. Their eventual marriage leads to the end of Part 1. It’s clear that her presence in his life will lead to something bad. Edward doesn’t seem to see this himself. But Daniel and his wife Carla suspect there is something more at play here. By the end of Part 1, they have yet to voice their suspicions to Edward.

One of the cool things about adapting old classics, especially in visual mediums, is how you can bring characters and locations to life. Rather than reading the original story and imagining them in your head, media like film and comics can do the work for you. I actually know someone who’s adapting another Lovecraft story – The Hound – into a short screenplay. They’re not the first to want to bring Lovecraft to the big screen – there are over forty short films based on his works alone!  Obviously, there is plenty of potential for Lovecraft stories to be adapted, with an abundance of creative choices available for the visuals.

With all that in mind, I can’t emphasize this enough: Asenath is TERRIFYING. Don’t get me wrong, the art style of the entire comic is gritty. But Asenath; every single panel she’s in, she looks like a villain. There’s one panel in particular where she’s leaning over Edward Jr., Daniel’s son, and…well, she doesn’t look human. Even though Daniel and Carla pick up on her weird energy, no one ever seems to acknowledge just how evil she looks. It’s the audience’s little secret, seeing her transform and do these terrifying things. Nightmare fuel, I’m telling you. It’s something I may never have envisioned if I just read the original short story.

Overall, The Thing on the Doorstep is a perfect story for Lovecraft and horror fans alike. The art style is gritty and doesn’t shy away from blood and gore. The characters are all likeable, and the setup is done with a lot of love and care. There are no narrators, and every bit of information about this world and the people within it come from the characters themselves. You’ll learn to love Edward and Daniel’s friendship; how they stick together, despite the distance and turmoil in their lives. Above all else, you’ll go to bed at night and find that Asenath’s transformation on page thirty-four is your new sleep paralysis demon. I’m not even remotely joking—she’s terrifying to look at. But I guess Edward’s into that; we all have our things.

The Thing on the Doorstep Part 1 is available on BackerKit hosted by Kickstarter. It also has prints, bookmarks, stickers, coasters, bookplates, and copies and merch of other works from the team! It’s definitely worth checking out, especially if you’re looking for more Lovecraft comic adaptations. If you read it, tell us what you think of The Thing on the Doorstep, what other Lovecraft stories have you read, and what’s your favorite Lovecraft adaptation? Let us know in the comments or send us your thoughts on Facebook or Twitter!