Home » “Lovers In Crime” Is A Fun Fantasy 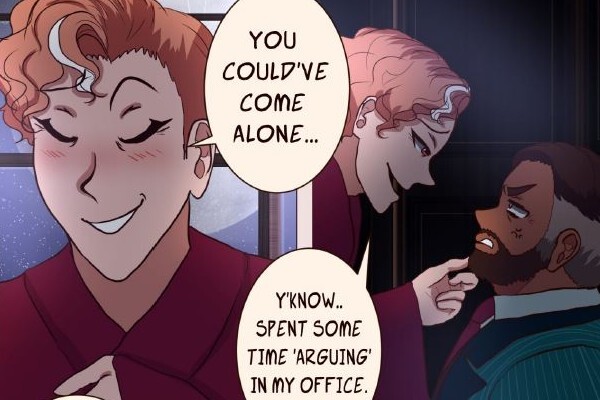 Lovers in Crime, by Lucy Dawkins and Joey Michelson, verges on an urban fantasy genre with a very basic premise; a married couple, Theodore Nowlan and Frederick Akashi, pretend to be rivals to prevent the public from noticing their relationship. While somewhat an improbable solution, the realism is not the point of this webcomic. It’s also a very backwards way of tackling the rivals to lovers, fake/pretend relationship that is popular amongst the romance genre. With a host of supporting characters of varying levels of importance; Lovers in Crime mainly follows different characters around as they attempt to simply live their lives.

Often webcomic artists have some idea of the overarching plot. But since they tend to release chapters weekly or page by page, they cannot plan everything out. This can work well if the writer has a clear sense of where the plot is going. But if they do not, then the entire story just gets more confusing; especially when the writer creates more build-up that does not lead anywhere. This comic falls somewhere in the middle. It’s towards the end of the volume that the inciting incident occurs. This is sure to lead various characters clashing together in the most interesting of ways.

While the narrative rambles on for quite a while before building up the action, this comic suffers the most from not clearly defining its characters. They appear, and the narrative tells the reader about their motivations and personalities. Unfortunately, these motivations and personalities do not go with their actions. The two main characters are criminals yet still, not a lot of time explores the potential for complex shades of morality. Instead, the webcomic spends its time making these characters out as sympathetic as possible. A brief introduction at the beginning lays out their illicit activities. After that, Theodore and Frederick wastes the rest of the comic being in love, and worrying about the circumstances that keep them from being happy together.

I do believe that this story has a lot of potential. The concept of having two characters who are not good people, but fight the system together is truly interesting. I hope the narrative will explore this in more detail as more volumes come out. This is not easy to execute, and having nuance is difficult. But using these elements together is well worth it! The environment itself is also very interesting; I believe the writer could use the world more effectively if she develops it further. While realism is clearly not the focus, nothing too fantastical occurs. Because this setting exists outside the bounds of our own world, that element can be enriched and expanded upon on.

What kind of character do you want to see next? Want to check out the illicit Bonnie and Clyde-esque of romance of Lovers in Crime? It’s available on Amazon for your viewing pleasure! Sound off in the comments or send us your thoughts on Facebook or Twitter!