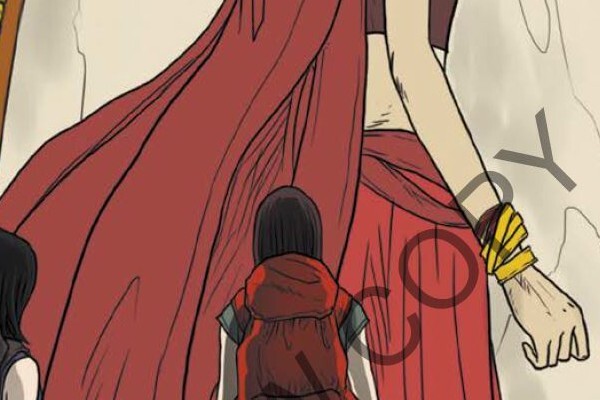 Return, written by Tom Steephen and drawn by Kevin Low, follows Sayana. She is the daughter of a rich Singaporean businessman, and is constantly plagued by nightmares. We follow her spiritual journey as she attempts to lay the soul of a past life to rest. Her path takes her to the Himalayas, to Jodhpur in India, then to South Korea, and finally China. Along the way, she encounters a growing number of people connected to her past life as the princess Sonali. Julian Park, who used to be Sonali’s uncle; Ming Li, who once was Sonali’s bodyguard. Sayana is also accompanied by her friend Cassie, and two reporters who insist on following her around.

The art style is in color with well-rendered detail, though sometimes the faces distort slightly. They are not always consistent. Return also suffers from stilted dialogue; some attempts at humor can fall flat as a result of this. Characters also don’t always speak in ways that seem believable. This is more of a result of storytelling conventions than the fault of the writer. Other issues come up in the increasingly entangled plot. Layers build onto the past and present, and it becomes impossible to distinguish between real memories and imagined ones. The attempts at weaving in the details of the past in a way that makes sense is not always successful.

Steephen tries to confuse the reader; he gets them to believe one thing and then turns on a heel with an entirely new revelation, changing everything. Sometimes this works, but other times it just adds to the already overflowing plot. Although not flawless, Return does many things well. Spirituality and exploration of past lives is an interesting concept. It leads readers to come to new conclusions about the ways in which our present and the distant past interact with each other. Themes of forgiveness and the all-consuming nature of revenge are also present. Research is evident, and the story feels very grounded to the many Asian countries and locales it wanders through. Nearly all of the cast except for the reporters are Asian; touching on concepts of Buddhism as the central plot device.

Sayana also comes from a place of privilege, which Return emphasizes frequently; what happens to her can happen to anyone, regardless of their status in life and the level of comfort with which they have. Sayana, Julian, and Ming Li; despite the different roles that they play in the past and present, are equal within the cycle of samsara. They all suffer from similar nightmares and must grapple with their pasts in order to achieve peace in their current lives. It is a good message, and one which people need to hear more often. The cycle of life, death, and rebirth seems to lead down a circular pathway that brings people back to where they began. Despite this, our pasts do not solely define us.

What do you think your past life was like? Want to explore the wonders of Return? Check it out over on Markosia. Tell us all your thoughts in the comments, or hit us up on Facebook or Twitter!