Home » “She-Hulk: Attorney At Law”: It’s Not Easy Being Green 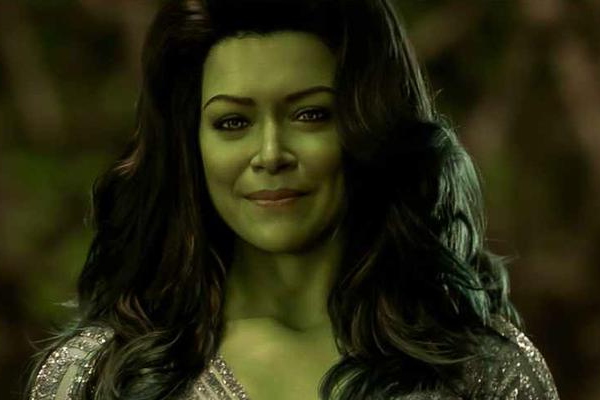 Across a plethora of movies and TV shows, it’s fair to say that the MCU took its time to allow its female superheroes to take centre stage. Thankfully in Phase Four, with characters such as Wanda, Kate Bishop and Kamala Khan, the balance is shifting a little. With the release of its first trailer, we finally get a glance at She-Hulk: Attorney At Law, with Tatiana Maslany playing the title role.

I must admit that of all the Marvel characters, I’m no expert when it comes to superhero lawyer Jennifer Walters. However, she would often turn up in crossover events in the comics of my youth, and I’ve definitely seen She-Hulk smash up some scenery in the LEGO games.

So as a relative newcomer to the character, what are my first impressions from the trailer? Walters appears to be a high-flying lawyer who we immediately see being poached to head up a superhuman law division. Because even superheroes need legal counsel. If anyone decides to sue the Avengers for property damage, even Stark’s inheritance may struggle to pay off those charges.

It looks like we’re in for a lighter, more comedic journey than the recent mythology-dense Moon Knight. Who better to bring the comic relief with a dose of angst than Mark Ruffalo‘s Bruce Banner? With years of crime-fighting under his belt, Banner is clearly the best person to help Walters deal with her transformation. Here, he appears to be her taller but equally viridescent Yoda figure. Sometimes you just need to call your big green cousin to help you out.

It’s interesting that She-Hulk is another hero who doesn’t seem to have the option to blend in, to say the least! (Whether her green exterior will become permanent in this version is yet unclear.) What effect will this have on her daily life and legal career?

One of my highlights of the trailer is the glimpse into her dating life. Unlike her original debut in the 1980’s comics, she now has the easy option to swipe right like the rest of us. This comedic aspect of the show seems like a lot of fun so far. I also enjoy the joke about heroes being “billionaires and narcissists, and adult orphans”. Despite her mocking the likes of the late Iron Man, she certainly seems to share his dry humour.

Like many, what I remain hesitant about is the CGI the show uses for She-Hulk post-transformation. Maybe we’re just used to Ruffalo’s Hulk by now, but comparatively it’s a little jarring.

We also get a glimpse of Tim Roth‘s Emil Blonsky/Abomination back on screen. Will he be an enemy in this series, or will he have more of an anti-hero route? Either way he’s a great actor and addition to the series. Previously, characters originating from The Incredible Hulk comics were mostly relegated to the side-lines and solo Hulk adaptations. I’m interested to see how they will be integrated as Phase Four goes heavier on the sci-fi and mystical elements in equal measure.

So what will this upcoming series have in store? As the MCU expands into TV series, I’m intrigued by the addition of a comedy/legal drama hybrid into the mix. Most importantly, will She-Hulk’s debut be more essential viewing than her cousin’s solo outings? The jury’s out so far, but personally I’m hoping it will be a smash hit.

Are you looking forward to She-Hulk’s MCU debut? You can check out She-Hulk: Attorney At Law when it premieres on August 17th 2022 on Disney+ Sound off in the comments or send us your thoughts on Facebook or Twitter!