Home » Finding Strength’s Meaning In “The World My Arena” 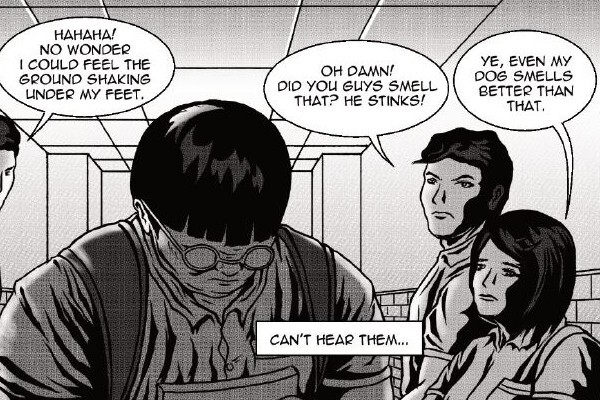 The World My Arena – written and drawn by Kang Jing – focuses on Nathan. Nathan lives alone with his younger sister Chloe. As a high school student who doesn’t fit the mold; he is the subject of such intense bullying that he considers suicide. Luckily, he soon meets someone who helps him. Gideon is the mysterious cleaning man who works at his school and is highly proficient in martial arts. With Gideon’s guidance, Nathan gains the courage to stand up against his oppressors. Vol. 1 winds its way through Nathan’s fight against his bullies and the people who stand by silently, ignoring his suffering. Meanwhile, Vol. 2 expands the world, bringing in elements of Gideon’s past. This entwines with the past of a friend Nathan makes along the way. There’s also a mystery that needs solving, and a dangerous gang that Nathan must stand up against.

The art style is rugged with clean lines, and yet a sketchy essence to it. Black and white; the graphic novel’s lack of color fits well with the mournful coldness of this world. Unfortunately, at times it can feel as though most of the background characters are flat. They gleefully torment Nathan, jabbing at him for his weight and personality. The teachers are no better than the students; they harass him just as much – if not more. While it is certainly true that situations like this can occur in reality, the extremeness of what he undergoes from every side seems to extend beyond what is socially acceptable. Nonetheless, the plot is at its best when it focuses on Nathan’s personal struggle.

Watching him overcome his suffering and learn to defend himself as well as his sister is truly touching. His love for her saves his life in the beginning; she stands up for him when nobody else will. As his biggest fan and staunchest supporter; you can’t help but root for him when Chloe cheers him on. Vol. 2 broadens the scope; while Nathan remains the main focus of the comic, other elements are introduced. This somewhat muddles the plot. As soon as the story expands beyond the confines of school, the direction gets more confusing. Gideon’s past is compelling but draws the attention away from Nathan. While his story is tragic, it’s quite baffling. Perhaps the next volume will flesh this out more.

Regardless, the essence of the plot maintains its effectiveness. The World My Arena engages mainly on the issue of power. Nathan first experiences the power that others hold over him. For a while, he believes that this is the only real strength that exists. Gideon teaches him that this is not the truth. However, Nathan’s greatest lesson comes from Chloe. His desire to defend her overrides all other emotions, including cowardice and anger. He learns that the greatest power a person can have is the power to defend the helpless. Real strength comes from knowing when to look out for others.

Love a healthy sibling dynamic? Fan of The Karate Kid film series? The World My Arena very much toes the lines of these topics. If you’re interested in Nathan and Chloe’s story, be sure to checkout this series’ Kickstarter which opens on July 29. Do you have a favorite form of martial arts? Let us know all about it on our Facebook or Twitter!