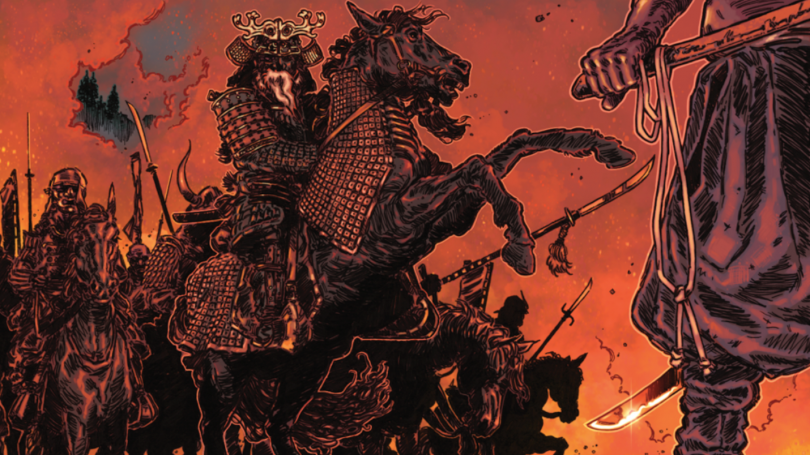 When elements of Japanese feudal history and mythology meet popular fantasy, stories like The Red Wave come to be. Drawn by Harry Hughes and written by Nick Goode; this comic promises a lot of color and adventure. The title also happens to be the name of a powerful ronin clan. Their purpose in this story is to find and protect two blades charged with extraordinarily powerful mystic energy. These swords are Masamune and Muramasa’s final swords.

#1 is the first of four, opening with a tea room conversation between a trio of ex-samurais. Hikaru, Mizuki and Daichi were forced to leave a life of honorable swordsmanship after their emperor’s death. Ten years later, the brothers-by-blade find themselves plunged right back into the bloody world of swords and broken oaths they’ve long thought they left behind. The three warriors manage to run away and build a small community in a peaceful village surrounded by rice fields. Here, they live as ronins. However, a dark secret has heavily been weighing down on old Daichi’s shoulders for the past decade. As The Red Wave locates the Muramasa blade in the brothers’ village, these secrets crack and spill out into the open.

In the midst of a burning rice field, the trio collide with the clan and an unexpected decision crops up for Daichi. To protect the community he built, he must make a great sacrifice which threatens to turn his brothers against him. A heartfelt conversation following the fire allows Daichi to repent for his mistakes. He withdraws from his position and leaves Hikaru and his family to take over the village. Meanwhile, Daichi and Mizuki join The Red Wave. They dedicate themselves to finding and protecting the blades that not only gift warriors extraordinary strength, but also bring people to madness.

The tale of the Masamune and Muramasa blades is very popular in Japanese culture. They’re essentially the Excalibur of the far east. However, The Red Wave is unique enough to give this story a distinctive and refreshing start. It takes a second to get used to the richly-decorated pages in the beginning. But eventually, the opulent art style does a great job of submerging you into the world. The panel layout is also relatively easy to follow.

Overall, The Red Wave is great for more mature audiences. Even more so, for anyone interested in the combination of fantasy, mythology and feudal Japan. #1 starts off as a bit too text-heavy. But in the end, it’s all essential information for world-building. The author skillfully weaves tales of magic into the gritty and authentic historical setting. This makes for an engaging and immersive read. The Red Wave is an interesting story about lost mystical blades with a surprisingly heartfelt human element, found in the bond between the ex-samurai brothers. It really makes one wonder where their next adventures will take them.

If Japanese myths and feudal fairtytales are your cup of tea, check The Red Wave out on Amazon. And if this isn’t for you, that’s alright, have a look at our other comic reviews! Don’t forget to hit us up with any of your thoughts on our Twitter and Instagram!