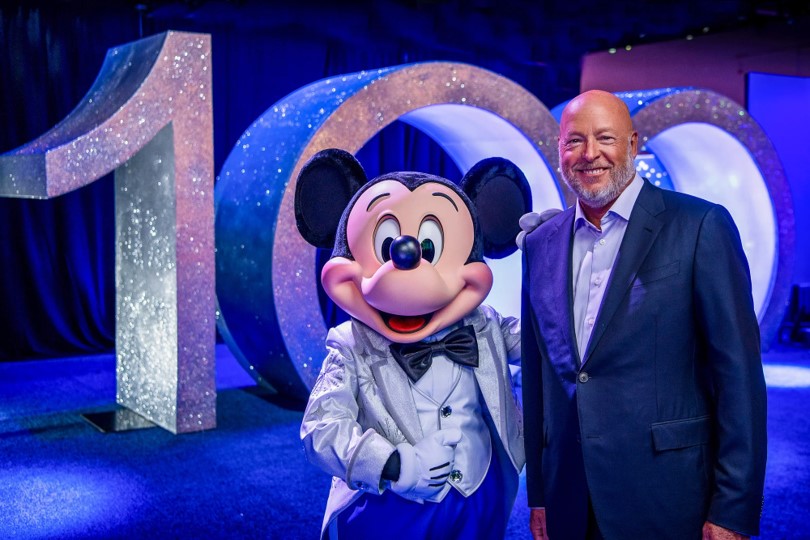 After three years, Disney’s D23 Expo returned to the Anaheim Convention Centre to celebrate all things from the House of Mouse. With Bob Chapek blundering his way in his role as CEO, Disney have mostly found their income from Disney+ and raising prices at the theme parks. The company’s 100th anniversary is on the horizon, so you would expect Disney to pull out all the stops and make big announcements for the centennial. Not so much. Perhaps still recovering from the past three years, D23 Expo’s announcements felt a little lacklustre. Still, there were still a few surprises and neat headliners.

Disney and Pixar announced their upcoming film roster for the next couple of years, releasing new trailers, including the first of Disenchanted. Jamie Lee Curtis was confirmed to be appearing in The Haunted Mansion as Madame Leota. The Lion King remake’s prequel was announced as Mufasa: The Lion King, featuring a young Mufasa on his own journey to become king. The first trailer for The Little Mermaid was released. Even if it turns out to be rubbish, Halle Bailey proves she will steal the show in her role as Ariel. Iwájú is a new television series, a collaboration between Disney and the African studio Kugali Media, set within a futuristic Lagos, celebrating Nigerian culture.

Pixar announced their new films – Elemental, about two elementals who become friends but find they can’t touch; and Elio, about an 11-year old boy who falls through a wormhole and is mistaken as Earth’s ambassadors by aliens. They are also releasing Win or Lose, an anthology series about a dysfunctional baseball team. The big surprise was Inside Out 2, with Amy Poehler returning as Joy; though Bill Hader and Mindy Kaling will not, since Disney chose to lowball their salaries.

Disney’s animated feature for 2023 – marking their 100th anniversary – is called Wish, directed by Chris Buck and Fawn Veerasunthorn, with songs by Julia Michaels. The film is based in the Kingdom of Rosas, where wishes manifest through magic. The heroine Asha meets Star, a cosmic force, both working together when malevolent forces threaten the kingdom. The movie will combine watercolour and computer-generation animation together, referencing the past and present of Disney’s animated history.

On day two, we reached Disney’s subsidiaries of Marvel, LucasFilm, and 20th Century Studios The latter announced an Assassin’s Creed television series and further teased the upcoming Avatar sequels. LucasFilm announced that Christian Slater had joined Willow. Tales of the Jedi was announced, a six-part miniseries with three episodes each focusing on Ahsoka Tano and a young Count Dooku. Star Wars: Skeleton Crew, apparently first announced back in May, will be released in 2023 on Disney+. It will star Jude Law amongst a group of character who are lost in the galaxy looking for a way home. Most excitingly of all, the third season of The Mandalorian premiered its first trailer, though the airdate was left vague. Harrison Ford appeared, announcing the fifth Indiana Jones instalment would be his last time donning the fedora and whip. Ford reunited at D23 with Short Round himself, Ke Huy Quan, who will be appearing in both Loki and American Born Chinese.

Kevin Feige took to the stage afterwards. Following the mind-blowing announcements at Comic-Con, a more seasoned panel was to be expected. It mostly served as promoting upcoming projects, but did announce Werewolf By Night, a Halloween special paying homage to classic horror films, starring Gael Garcia Bernal as Jack Russell and Laura Donnelly as Elsa Bloodstone. The first trailer for Secret Invasion was introduced, as well as a reminder that Armor Wars was still in production. As for the Fantastic Four, no casting was announced, aside from the film finding a new director in the shape of Matt Shakman.

A lot of new television series were announced at D23, hosted by an enthusiastic Raven-Symoné and Lilly Singh. By far, the most anticipated was Percy Jackson and the Olympians, based on the novels by Rick Riordan. Having spent the pandemic binging all fifteen books in the franchise, plus spin-offs, I am looking forward to this new series. Riordan, who is the show’s producer, introduced Walker Scobell, Aryan Simhadri, and Leah Sava Jeffries as Percy Jackson, Grover Underwood, and Annabeth Chase, as well as releasing a teaser trailer. Good times ahead, fellow half-bloods!

Another exciting new show is American Born Chinese, based on the graphic novel by Gene Luen Yang. It tells the story of Jin Wang (Ben Wang), whose first day of school goes mental when meeting a new student drags him into a world of Chinese mythology. The series also stars the aforementioned Ke Huy Quan, Michelle Yeoh, and Daniel Wu as Sun Wukong.

The Muppets had a delightfully large presence at D23, celebrating the 30th anniversary of Muppets Christmas Carol. Dr. Teeth and the Electric Mayhem opened the TV panel with a concert, in relation to their new show, The Muppets Mayhem, at the band try to get their first platinum album. Popular Disney films The Santa Claus and National Treasure are both getting sequel TV series, with Tim Allen reprising his yuletide role as Santa, whilst National Treasure: Edge of History focuses on a new cast of characters exploring the secrets of America. Let’s hope Nicolas Cage shows up!

Marvel is getting an additional animated series called Moon Girl and Devil Dinosaur, a “supercharged” series appearing on the Disney Channel next spring. Based on the comics, Lunella Lafayette (Diamond White) is a genius 13-year old who accidentally brings Devil Dinosaur (Fred Tatasciore) to the present. Both form a superhero team to defend New York City’s Lower East Side against supervillains. Laurence Fishburne also appears as the Beyonder.

Blue Sky “What Ifs” at the Theme Parks

Finally, the long-anticipated theme park panel occurred, hosted by Josh D’Amaro. The 2019 panel featured a lot of exciting announcements, several of which have sadly fallen through following the pandemic. The 2022 panel was the opposite, relying on running out the clock and remaining as vague as possible. Aside from the return of night-time shows and parades, most of the announcements were low key updates.

Marvel-wise, it was confirmed that the third attraction at Avengers Campus in Disney California Adventure was still in the works. Based around a battle across the multiverse, guests and the Avengers will face King Thanos, a variant from a timeline where he won in Endgame. However, the ride system and type of experience were left unmentioned. Additionally, the Pacific Wharf area of DCA will become San Fransokyo, the setting of Big Hero 6. Considering how small said land is, the likelihood of a ride there is minimal.

The centrepiece of the panel was Tiana’s Bayou Adventure, the repurposed Splash Mountain. It is wonderful that Tiana is getting her own attraction, though like the rest of the panel, the finer details remained as vague as can be. Tron Lightcycle Run, which has been under construction for five years at the Magic Kingdom, will open in the spring of 2023. Meanwhile, it was Disneyland Paris and the Asian parks that are getting the more grander projects, including a trilogy of Frozen-based lands in Paris, Hong Kong, and Tokyo DisneySea.

In the most baffling moment, D’Amaro was joined by Jennifer Lee, Disney Animation’s Chief Creative Officer, and Chris Beatty, Creative Portfolio Executive of WDI. Together, they pitched what can be best described as “blue sky” concepts for expansions to both the Magic Kingdom and Animal Kingdom, including teasing a long desired Disney Villains land. “That’s what could be out there,” they said – as in the likelihood of getting Moana, Zootopia, Coco, Encanto, and a villains land at the parks are miniscule. Generally, Disney use these panels to show off what they are planning, not what they could do in a “what if” scenario.

Considering that Universal plans to open their new Orlando park Epic Universe in 2025, Disney’s own plans for the future are obscure as can be.

What did you think of D23 Expo? Did you attend? What were the best or worst announcements at the event? Leave a comment below, or on our Twitter feed.