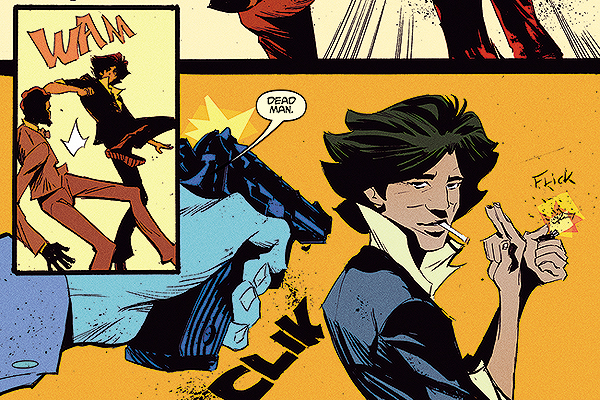 I’ve seen many versions of Cowboy Bebop; from the original series and fan comics, to the Netflix adaptation. But I honestly believe that Cowboy Bebop: Supernova Swing has the most striking visual style of them all. It seems like writer Dan Watters and illustrator Lamar Mathurin were inspired by the opening sequences of the anime and live action series. They both use vibrant, solid colors with a heavy amount of shadow for contrast. Supernova Swing doesn’t just take place in the world of Cowboy Bebop. This aesthetic and style also immerses the reader into the world of these openings.

If you’ve never seen Cowboy Bebop, the sci-fi elements (or lack thereof) will come as a surprise. Supernova Swing plays out like a classic crime comic. There’s gambling, robberies, gunfights, and many an explosion before you even see your first spaceship. The setting – vibrant and immersive as it is – always takes a back seat to the characterization, plot and visual style. This is a common theme all throughout Supernova Swing; every sci-fi element are marks of character reflection. They’re there for the heroes to make or reconsider their decisions, rather than be flashy or be world-building for its own sake. It’s this direct and character-driven connection that makes the world of Supernova Swing feel so engaging.

At first glance, Cowboy Bebop’s characters seem like the kind you might find in Lupin III or James Bond media; romanticized, globe-trotting, gun-slinging heroes. However, looking behind the curtain, these characters are all spinning their wheels. They’re stuck in a situation of their own making, thinking wistfully about what their lives could have been had they made different decisions.  Supernova Swing utilizes this premise to great effect; each story is about reflecting on the choices we make.

#1 is all setup, introducing the bounty-hunting team as they shoot their way through a near-future neo-noire world. Their target laid out – a mysterious thief with a vest that grants him incredible luck and a bounty on his head that’s impossible to resist – stakes raised, tensions high; this level of intensity runs through the comic until the beginning of the #2. From there on, all that excited energy abruptly drains away. At this point of the comic, the heroes find themselves on a planet that’s calm, pastoral, and peaceful. There’s even an alcoholic mixture in the air that keeps everyone feeling happy all the time.

Be that as it may, #2 gives our heroes a taste of something they’ve never experienced; a place to settle down, and an environment where the people who live there are “fine” with whatever happens – even having their homes damaged or being cheated at cards. It’s a land of relaxation, but also stagnation. This in turn resonates with the already stagnant heroes. There’s an almost insidious quality to this place, masterfully depicted by Mathurin’s artwork.

The third installment properly introduces us to Melville. He’s the owner of the quantum vest, and we learn what said vest can actually do. Instead of just simply making you lucky, the vest does something more complex than that. Basically, it lets you select from any number of countless probabilities and choose the world you want to live in. It’s a literal example of going back and making the right choices, forcing a solution. Naturally, this is something that a lot of people will want to get a hold of, be they heroes or villainous Syndicates (and sworn enemies Spike Spiegel).

However, the final issue once again takes everything we’ve learned and turns it on its head. Melville’s vest doesn’t actually work. He rigs a number of tricks, traps and elaborate schemes to make the world believe he’s the luckiest man alive. He has done this in a bid to get attention, to feel alive again, and to desperately relive his glory days. The moment he reveals this, he dies—killed by a corrupt police officer who wants the bounty for himself. Following this, Spike faces another choice that might drastically change his life, allowing him some time for self-reflection; the choice to kill the corrupt officer and destroy his current life, or spare the officer and end up back where he started.

Want to dive into the vibrant, violent, and self-reflective world of Cowboy Bebop? Check out Cowboy Bebop: Supernova Swing! It’s available through Titan Comics and is the freshest take on the characters to date. If you like it, let us know if you can relate to it over Twitter and Instagram.