Home » “Riders Of Berk: Stowaway” Sets Threads Of Plot For The Future Of How To Train Your Dragon 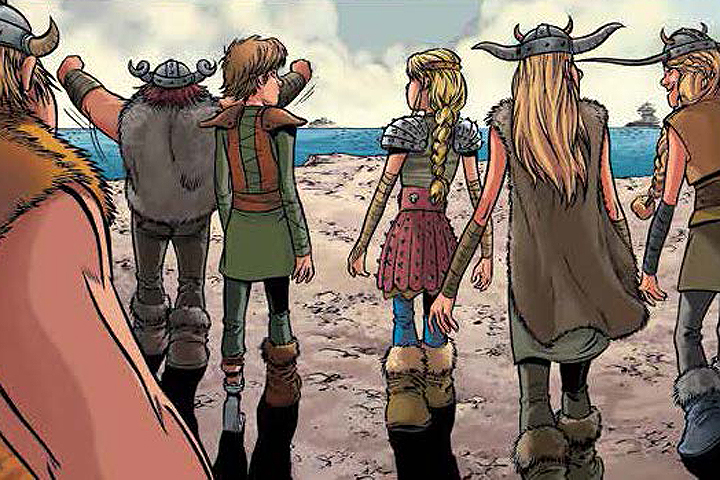 Iwan Nazif comes back again to join Simon Furman and the rest of the team for this fourth installment of the Dreamworks Dragons comics. Riders of Berk: Stowaway uses the early beginning narration to hint at a more developed plot. It’s not even just for this particular issue either, but the general world of How to Train Your Dragon. While Hiccup wonders about the world beyond them, a new face comes to town. Hroar from Knaff stows away on a ship to Berk in hopes of seeing dragons. He’s the complete opposite of Hiccup – tall, brawny, and handsome. He’s very much the picture-perfect image of Hiccup at twenty years old. There’s a nice cyclical structure to this issue with the revelation of Hroar’s origins. The ending brings it all back to the fact the theme of Berk not seeking danger, but danger finding Berk.

The question of the world beyond Berk and the archipelago is constant throughout the franchise. We see it in the first film how Hiccup breaks that barrier between dragons and the Berkians. Then there’s Race to the Edge; the whole premise of the series is the dragon riders exploring islands beyond the boundaries of the archipelago. Even How to Train Your Dragon 2 and How to Train Your Dragon: The Hidden World show the consequences of Hiccup threading to the far waters outside of Berk. In general, this particular issue forms the basis of a lot of the future plots within the franchise. Another interesting angle is everyone’s sudden allure to Hroar. On the surface, it makes no sense. But taking into account how poorly they once treated Hiccup, it’s very on-brand for them to be so flimsy.

Still, in Astrid’s case, it doesn’t add up. Her intrigue about Hroar is quite weird. Especially because between her and Hiccup, she’s the paranoid one and he’s the overly trusting one. But not here—it’s the exact opposite. Yes, she’s usually direct, straight to the point, honest and critical when she needs to be. But there’s unnecessary aggression in her confrontation with Hiccup about Hroar. There’s absolutely no reason for her to be mad about Hiccup’s suspicions when she has known Hroar for less than two seconds. Then again, it’s a total reversal of their positions during the Heather fiasco. This forshadows their whole schtick with Viggo in Season 4’s finale of Race to the Edge. The other thing to note about all this is that Hroar’s integration with the dragon riders was very unnatural.

Another interesting factor that should’ve been a clue to the readers is Hroar’s knowledge of Berk. He reasons that everyone knows the story of how Hiccup and Berk trained dragons. But anyone paying attention to any of the films will remember Hiccup referring to Berk as “the best-kept secret” this side of the archipelago. This quote in particular builds the foundation of How to Train Your Dragon 2 and The Hidden World’s plot. Because the second film shows how vast the world is and how small Berk is compared to it. When Astrid reveals Hiccup as the “dragon conqueror” to Drago, she essentially puts a target on Berk’s back. As for The Hidden World; its whole point is that the dragon riders’ deeds have spread so far it has reached some notoriously powerful people.

There are other little things I particularly like about Stowaway. One is the reference to an ancient language and gesture used to control dragons. There’s no further explanation as to what this is or why Hroar knows this. But there’s intrigue there and it’s excellent for further building the world of How to Train Your Dragon. I also really like some of the tropes used here, like Toothless judging Hroar’s character. It’s very much the same as animals sniffing the bad guys out in other media. Furthermore, there’s an effort to fix some inconsistencies within the TV series. Specifically, Torch’s age and why he grew up so fast in the span of two seasons. That only leaves Garf from Race to the Edge now! As per usual, Stowaway is just as funny and pun-filled as its predecessors.

In general, there are some visual styles that I like. There’s timing the beat of the visuals with specific words. I also find the color powder on Toothless very cute. It’s also interesting to see a new power from Toothless. His body igniting in blue flames is aesthetically nice on paper. This might even look cool animated in the films or the TV series. But as a striker-class dragon, it just doesn’t suit Toothless. So, I’m glad it doesn’t go further beyond just that one page. There is one thing that bothers me about this issue though. It seems like there’s less effort put into coloring the dragons this time around. Which is disappointing, to say the least. Other than that, Stowaway has been a fun read. While not my favorite, it definitely has a lot of interesting things going for it.

We’re reviewing every single comic from the Dreamworks Dragons series every month in anticipation for the How to Train Your Dragon 2’s ten-year-anniversary. If you love animation and dragons, miss this 2010 classic, and want more of the dragon riders; you may want to check back in every now and then for the rest of the series! You can pick-up a copy of Stowaway on Forbidden Planet or Waterstones. It’s collected alongside the rest of the issues in the Riders of Berk title. Let us know what you think of Dreamworks Dragons on our Instagram or Twitter!