Home » “London Gothic” #1 And The War On Light And Dark 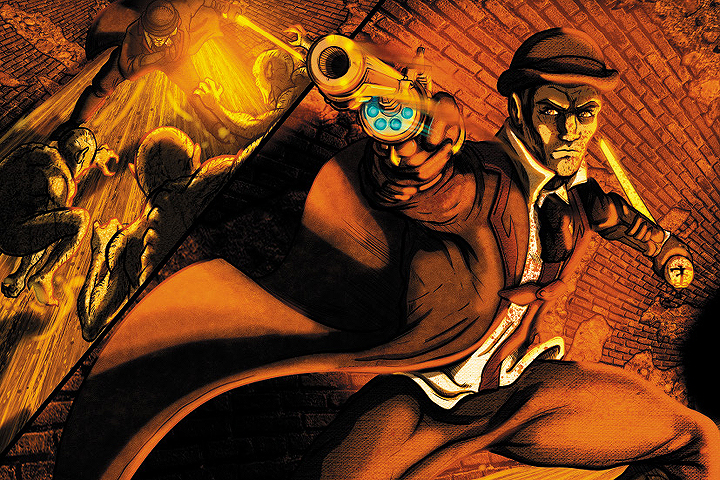 There’s something strange happening in the streets of London. Children are going missing, and there are rumors of goblins and monsters running about. Witchcraft, sacrifices and summoning rituals collide with underhand deals, black market activities and informants in London Gothic. This new comic series by Nick Henry and Michael D. Burton follows the Duke and Jellico. The Duke is the last of a secret society of demon killers that protect the light from the darkness of hell and its creatures; Jellico is his righthand man. The mix of crime and the supernatural is similar to manga the likes of Bungo Stray Dogs and Black Butler. As a matter of fact, the combination of both these titles is the same vibe I get from London Gothic.

There are traces of the same palette and filter from Bungo Stray Dogs. I love the use of color in this comic; it’s the mix of yellow and orange shades against the nightly effect of teal and cyan. The warm tones represent light, while the cool tones tint the shadows and darkness. This dual palette is representative of the light versus dark motif. When separated into different panels, they have such a strong contrasting effect. But when used together in one image, they create magnificent scenes that build the world of London Gothic.

Set in Victorian London, the comic’s aesthetics are very in-tune with Black Butler. The scenery and character designs – although differing in art style – are very similar to the work of Yana Toboso. Furthermore, it has a lot of parallel story concepts to Black Butler. It has the flesh-eating monsters from the ‘Campania’ arc; there are cults, witchcraft and demon-summoning; the circus-abducting-children shenanigan is also another plot used in the manga series; even down to the innocent-officer-caught-in-the-middle-of-it-all is very on-brand for Black Butler. Whether intentional or not, all these references are things I enjoyed a lot in London Gothic.

In terms of the script, London Gothic hones in on creating atmosphere with the words and characters. It touches base with Victorian social issues without really exploring them. Things like racism and slavery, sexism and toxic masculinity, religious corruption; these are normal occurrences casually mentioned throuhout the comic. Colloquialism in writing allows the readers to audibly hear the accents of the people talking. This further builds the world and make readers feel a sort of kinship with each character. This is especially true for the Duke and Jellico’s interactions. The contrast between the Duke’s formal speech and Jellico’s gruff and heavy way of speaking reflect their personalities and roles in each other’s lives. Their dynamic in general is one of the most entertaining factors of the graphic novel. It’s the banter and the annoyance. But at the end of the day, Jellico has the Duke’s back.

Unfortunately, there are too many different things happening, and it’s hard to keep track. There are ancient ruins, the mystery of the abducted children, and monsters eating flesh. Of course, all of these things will probably connect eventually. But the story needs to be a little more streamlined. I understand trying to build hype and mystery. But all of that is for naught if the story is muddled and confusing. It’s no longer a fun mystery to be solved, but tedious work that needs to be done to understand what’s going on. The time indication also needs clarity. There are instances when #1 jumps back in time, then jumps back to the present. But the time card will say it’s “a few months after”. This is confusing because there’s no clarity on whether it’s a few months after the flashback or if it’s a few months after the present time.

I do appreciate a lot of the visuals in London Gothic. I like the bar fight scene; it reminds me very much of the Frankenstein’s Monster scene with Magneto in X-Men: First Class. The demons also have their own style of speech bubbles; dark red shades make the font look like it’s dripping blood off of the page. But my favorite scene of all is definitely in the latter half of #1. When Bailey discovers the Duke’s connection to his attack, the Duke asks him to keep things a secret. Bailey inquires that if he refuses, will the Duke make him disappear. Jellico then appears at the doorway as the Duke indicates that Bailey won’t disappear by the Duke’s hands. It’s just such a cool scene and further emphasizes the relationship between the Duke and Jellico. Which again, is definitely the highlight of London Gothic for me.

Love stories about Victorian London? Have a taste for witchcraft, demon hunting and the supernatural? London Gothic puts all of that at the forefront, and more! The purchase info for the complete first issue is available on its website. Do also talk to us on Twitter and Instagram about all things London Gothic and comics!