Back in 2008, when New Line was embroiled with a thorny lawsuit with Peter Jackson and the Tolkien estate, there was a period where Guillermo Del Toro was signed up to direct The Hobbit. At the time, I was ecstatic this. There were many reasons for this, not the least of which is that Del Toro has proven himself to be an extremely accomplished director with a deep respect for the fantasy genre. But most of all, I just couldn’t wait to see the types of creatures that his mind would think up to populate Middle Earth. One of Del Toro’s greatest strengths as a director is the unique aesthetic he brings to his films’ fantastical beings. From the Pan’s Labyrinth’s Pale Man to the Reapers in Blade 2, his supernatural creations possess strikingly individual looks, managing to feel both majestically otherworldly and frighteningly real.

Obviously, Del Toro’s Hobbit did not come to pass. But while we may never see his vision of Middle-Earth, his latest film, Pacific Rim, shows that the Spanish director hasn’t missed a beat in the five years since his last work. This ode to mecha anime and Japanese monster movies is a clear labor of love for the genres, but as impressive as the film’s giant-sized battles and imposing Jaegers are, it’s the Kaiju threatening humanity that prove once again why Del Toro is the best monster-maker working today.

Fair warning, a few spoilers below.

The first thing one notices about Pacific Rim’s Kaiju is that they are massive. Strike that; they are MASSIVE. Even in a movie whose pitch is essentially “giant robots punching giant monsters”, the sheer scale represented by these creatures never ceases to impress over the course of the film. What’s more, in sharp contrast to some other more spindly or fluid large terrors of recent Hollywood (looking at you Cloverfield), the Kaiju have the mass and bulk to match their grotesque size. Care has been made to ensure they look solid, not impractically cool-for-cool’s-sake. As a result, their rampages have a strong sense of inevitability to them. Early in the film, a wall designed to protect the coastlines proves utterly ineffective. This comes as no surprise to the audience: simply glancing at the Kaiju lets us know that these beings are both durable and unrelenting, an unstoppable force without an immovable object in sight.

It’s always a danger that too much glaring CGI can make a monster appear artificial and undercut its menace. Luckily, the effects in Pacific Rim are top notch, and do a tremendous job at selling the Kaijus’ physicality. But the numerous tiny throw-away glimpses at the Kaiju’s physiology given to us also do a lot of work to flesh out the creatures. Their blue blood contains heavy concentrations of ammonia. They come with legions of Labrador-sized skin parasites around with them as they trample through cities. Their bodies are so large that they require two brains in order to process the required amount of motor control. Each newly revealed facet of the Kaiju makes the beings more fully realised, and encourages the viewer to imagine what other alien secrets of theirs might still be hidden. 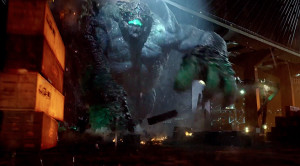 In fact, it’s the dual-brainedness of the Kaiju that leads to Pacific Rim’s one big twist: that these creatures aren’t just rampaging beasts, but are monsters specifically engineered to devastate our world in preparation for an invasion. Honestly, the use of the word “twist” above is a bit of a stretch. Pacific Rim doesn’t spend much time exploring the idea beyond using it to raise the stakes marginally higher. But if the ramifications of this revelation are given short shrift in the movie itself, they provide some fascinating implications for the audience to chew on. In simple terms, it’s a clever way to justify both the variety of the Kaiju attackers (the “others” are attempting to find the most efficient model to take out Earth’s defences) and to give the beasts features that would never emerge from evolution (à la Leatherback’s EM pulse). Perhaps more interesting however, is that this reveal presents the Kaiju as essentially biological versions of the Jaegers, with both behemoths being designed rather than born and both requiring a multi-being neural interface to operate. Indeed, one wonders if humans may have even gotten the idea of the ‘neural handshake’ from studying one of the first Kaiju themselves. This elegant parallel is exactly the type of thing that could be further explored should Pacific Rim get a sequel.

Of course, even though the Kaiju share the same DNA, Del Toro does an excellent job at imbuing variety into each creature’s design. Each Kaiju shares many of the same traits – 4+ limbs, a daunting size, reptilian grey skin covered with bright, day-glo-esque markings. Yet each creature also manages to stand out as its own individual threat, ensuring that even the beasts with the least screen time come off as memorable. Many of the Kaiju’s designs take inspiration from animals found on our own planet: Leatherback’s form calls to mind a hulking gorilla, while Onibaba (the Kaiju that threatened a young Mako Mori and a personal favourite of this author’s) looks like what would happen if a crab mated with a mountain. But while the comparisons to oversized Earth creatures come easily to mind, there’s always just enough ‘off-model’ about the Kaiju that makes the similarities even more unnerving.

Over the course of Pacific Rim, we get to see nine distinct Kaiju creatures, and every one of them has something special about it. But I would be remiss in talking about the film’s antagonists if I didn’t give a special shout-out to Otachi, the lizard-like Kaiju at the heart of the Battle for Hong Kong. Even next to his peers, the design and execution of Otachi is superb. It’s movement modes shift effortlessly from eel-like grace to darting speed to taking to the air as a motherf**king bat as the battle moves about the city, and its acid spit and powerful tail make it  an extremely formidable foe. What’s incredible is that the fight against Otachi alone takes a good ten minutes and yet the combat never gets boring; the Kaiju’s attributes let it constantly throw new challenges at Gipsy Danger. In a movie filled with exciting monsters, it manages to distinguish itself from the pack.

While it’s opening weekend box-office certainly isn’t bad, it’s looking as though Pacific Rim may not be as successful as its makers had hoped. And that’s a true shame. The movie as a whole may be cheesy and cliché at times, but it’s as enjoyable a ride as I’ve been on in a while. And director Del Toro’s Kaiju manage to earn easy entry into the Monster Movie Hall of Fame while standing as a respectful and loving tribute to the genre whose name they bear.

Have you seen Pacific Rim? If so, how did you think of creature design compared to the rest of Del Toro’s filmography? Sound off below.