Home » The Problem with Sex and Superheroes 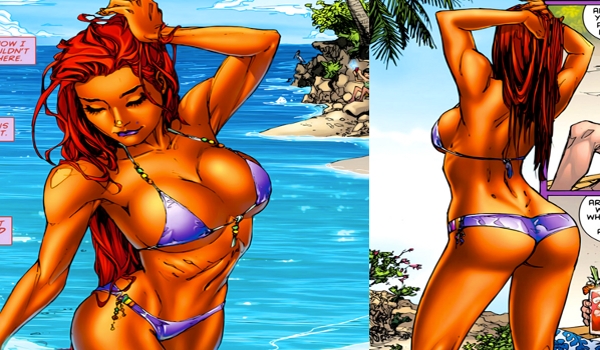 The bane of moral guardians everywhere- sex (of course) is currently more present than ever in mass media, plastered over even the most innocent of TV and film. I for one can’t make it through my daily Dinner Date without seeing a Gaviscon advert where suspiciously happy tiny firemen composed of a thick creamy substance gleefully descend down an oddly pleased woman’s throat. But strangely enough, the ‘scourge’ of sexual representation is largely absent from comics, particularly mainstream superhero books.

One reason for this of course is that most superheroes just might not have the time. After all, being Superman must be a full-time job, or at least a very hectic job-share (with Clark Kent of course). Or, in the case of Hellboy and B.P.R.D, the mood’s simply not right- the currently unfolding apocalypse simply puts a jinx on all and any ongoing hanky panky. But, it’s hard to believe this is the case for all heroes. Take Spider-Man: sure, he patrols New York, but he’s a freelance photojournalist with a steady girlfriend- it can’t be too difficult to find the time.

No, the more believable reason is that superhero comics are deliberately avoiding the matter. This has a long history. Before superhero books, in the heady days of the early 50s, romance and horror books dominated, along with war and sci-fi genre work. It was the Fifties, so little was explicit, but the stories dripped in innuendo: EC in particular offered a sideline in medical romance, a genre dominated by heady scenes of panting nurses in supply closets briefly clutching passionately at young resident doctors. The horror and crime lines of EC (which had great names like ‘SuspenStories’) also often revolved around the affairs of their main characters, as a motive for ironic murder by vengeful husbands/wives/guys/dolls/gangsters/molls. But the wholesale censorship of comics after Frederic Wertham‘s Seduction of the Innocents led to the closure of most of EC’s stock and the introduction of the Comics Code, which stunted the content of comics for many years. Although this Code is no longer in effect, its aftermath can be felt in every euphemism in books today (my favourite: B.P.R.D. will portray a human being ripped into pieces with entrails, but does ‘#%!%’ to swears).

A more difficult problem that lack of sexuality in comics presents is that it constitutes a free pass for all sorts of nasty character work and creator misogyny to leak onto the page. Take, for instance, the Catwoman of the New 52: her first issue opens with three pages of her arse and breasts showcased in loving detail, but with nothing of her face. The issue ends with the Caped Crusader himself having sex with Catwoman on a Gotham rooftop. There are many issues with this (does the writer not get unresolved sexual tension as a character device? Since when would Batman have sex on the job?) but the worst is that a strong female character is reduced purely to her physical sexuality, and in a male-centric way. Starfire received a similar treatment, becoming a sex-obsessed blank slate. This may well be the dream of the teenage boys comics editors apparently aim their depictions of sexuality at, but a soulless tit-machine is not for everyone, especially the many women who purchase comics (and men with consciences).

This isn’t just a DC problem- Marvel in particular feels a bit muddled here, for instance making references to Reed Richard’s spectacular abilities and their obvious use in the genital department in Fantastic Four, and similarly their turning a blind eye to physical sexuality lets weird plots get by, such as the Vision and Scarlet Witch’s maybe-babies (and the ensuing misogynist mess that is Avengers Disassemble). In all these cases, a lack of healthy representation of sex allows for sexist and misogynist representations to sneak in.

It doesn’t have to be this way. Take, for instance, the love scene between Mina Harker and Allan Quatermain in League of Extraordinary Gentlemen Vol. II. (I would have said spoilers, but it’s 10 years old, and Alan Moore couldn’t have foreshadowed it more clearly if he had fired a flare every time someone read the book). This shows sex as it might actually happen between two human beings- they turn off the lights because they’re awkward about their bodies, they have realistically proportioned bodies (and body hair!), and- thank the heavens- there are female orgasms. Yes! Women can experience pleasure too! Most importantly, the sex isn’t forced, or titillating (erotic maybe): it shows a moment of incredible intimacy as a part of a developing love story. It is the sort of maturity many comics can only dream of.

I’m not saying sex should feature everywhere in all comics. Some comics are family-aimed, so- like the relative lack of sex references in family films- there shouldn’t be overt sex there. But otherwise, why not? My rule here: if the comic I’m reading was a TV show, would it include a sex scene? If so, then the comic should be able to as well. Ultimately, when comics creators are able to include depictions of sexuality, they are able to portray character aspects that they otherwise could not. When comics creators are clear about how they want to treat sexuality, we can compare those visions with each other, and critically assess those which don’t match in quality. When comics creators can portray sexuality in an assessable way, they are forced to consider how they portray women, and more people buy comics. So when comics creators can portray sexuality, we get better comics. Simple!

Do you agree with this article? Did you think Catwoman had an awesome New 52 reboot, or hate Alan Moore’s sex scenes? Comment below or tweet to us @AP2HYC to let us know!