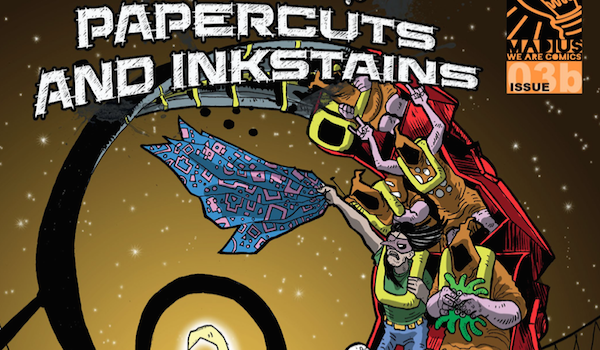 This is a particularly cool story because the vast majority of it is drawn in a POV style. It takes the notion of a first-person shooter to a whole new level, following a group of soldiers as they engage in combat with a group of indigenous people on another planet. The entire story is a bit like looking down a scope, due large in part to the fact that each frame is drawn as though you’re wearing specs. You only see what the POV character sees, meaning that the visuals range from exclusively showing a scope of a gun, to showing an actual firefight between the soldiers and the people native to the planet.

While certainly a fun read, it’s actually the visuals of, “FPS,” that take the segment to another level. Disregarding the already unique POV depiction of the story, the actual detail of the images is what really sets it apart from some of the other indie comics that I’ve seen recently. They seem to be more like graphics than actual drawings and the amount of detail that was put into each panel is wholly impressive.

The story itself is incredibly short and, as mentioned, much of the action is displayed through visuals alone rather than written descriptions. The concept of one group of people coming and wiping out another for resources or intel isn’t exactly new, however, “FPS,” has a very interesting final image that manages to had a new element to the idea.

“The Perplexity,” is aptly titled because at certain points whilst reading it I was whispering, “What the f*ck?” to myself.

The story focuses on what initially seems like a standard bank heist and then promptly becomes one WTF moment after another. Though not necessarily action heavy, there are a few graphic deaths… some of which stick, others of which do not. Way more dialogue heavy than the first story of 3B, “The Perplexity,” gets real preachy, real fast. I use, “preachy,” for lack of a better word. More than anything we just get a mysterious masked figure spouting off quotes and thoughts that seem like they’d be ancient proverbs or sage words of wisdom. It’s a bit trippy in general and, while the robbers are stopped, it’s hard to say whether or not, “the good guys,” win… mostly because I still have no clue if there even are good guys.

In terms of visuals, “The Perplexity,” is another story that finds its strength through shading and a copious amount of grey. Burke’s style is unique in the sense that the images almost have a watercolor quality to them, with less focus on line work and more focus on the blending of varying shades of grey to create distinct visuals and tonal differences. The oddity of the masked character is accentuated through his visual portrayal, and would likely be just as disconcerting even if he didn’t spout of his wisdom kudos to the fact that he looks just as odd as he sounds.

As the only story that’s a continuation of one from prior issues, “Profits of Doom #3,” picks up where #2 left off… the world is coming to an end thanks to a deer on steroids that’s been possessed by the demon of all demons. If you didn’t think anything could get more ridiculous than a demon-deer, you were so wrong I can’t even describe it.

Let’s just say that, “Profits of Doom #3,” includes all of the following: a three-headed cat the size of yacht, a hippo that can fit an entire school bus in its mouth, a T-rex, and a, “human meatball.” No, you did not read that wrong.

The central plot of #3 involves the idiots responsible for bringing on the end of the world searching for the ancient tome that will, hopefully, help them reverse their earlier foolishness. Unfortunately, what with the whole, “end of the world,” thing, there aren’t exactly many buildings around that would have such a book. Luckily, there is one, but the cult has to make it past the crazy obstacles listed above to get there.

I’ve said it before but, “Profits of Doom,” is still my favorite of the stories featured in Papercuts and Inkstains. Mostly because, quite frankly, I find it to be damn hilarious. This cult of men in the midst of the worst mid-life crises of all times are such complete and utter buffoons that watching them try to figure out how to deal with being the literal purveyors of death is endlessly amusing. Particularly because they are quite literally the last people you would ever assume could last an hour into the apocalypse, let alone be the individuals to figure out how to put an end to it.

Mike Smith unsurprisingly draws another fantastic comic and manages to add a depth to the images that is somewhat remarkable. To insert as much detail into a comic as, “Profits of Doom #3,” has, using only black, white, and grey, is an impressive feat. That’s likely not saying much from someone who has no artistic abilities whatsoever, but it should certainly be said regardless. “Profits of Doom,” has always been one of the more visually stellar segments in Papercuts and Inkstains and that fact holds true with installment #3.

Much like Part 1, Papercuts and Inkstains 3B was another solid addition to the series. There was a decent variety of stories and, in my opinion, 3B provided some of the strongest visuals to date. What sets the comic apart from other indies currently available is the fact that it gives you more than one story. The anthology format still proves to be a strength where Papercuts and Inkstains, namely because the individual stories within each issue are well-written and interesting enough to warrant the standalone structure.

Be sure to do yourself a favor and head over to the Madius Comics online shop and snag yourself some hardcopies of Papercuts and Inkstains ASAP!

And while you’re at it, be sure to follow @MadiusComics and @AP2HYC on Twitter so you can tell us just how much you enjoyed the read!