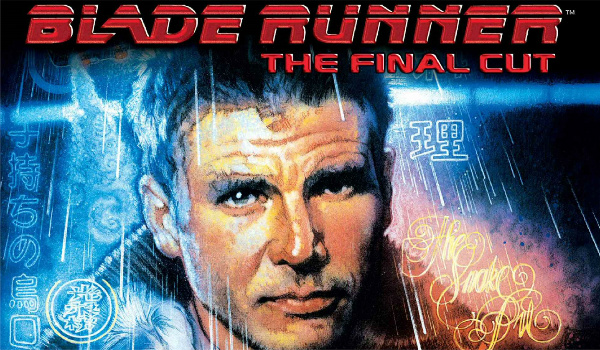 I just want to get something out of the way here. Blade Runner might just be my favorite movie of all time, but it doesn’t contain that much action, which is the singular reason it did not automatically make number one. As a science-fiction film, I can’t think of anything better than this, especially if we’re talking about the 2007 “Final Cut” version, which we are. Let’s find out just why this film ranks higher than the junk that came before it!

Blade Runner is not only my favorite movie, but it also just happens to be based off of a book called Do Androids Dream of Electric Sheep? by one of my favorite science-fiction writers, Philip K. Dick. I will say that the film does have a catchier title, but the book’s title is interesting all on its own. The legendary Ridley Scott directs this adaptation, which stars Harrison Ford, Rutger Hauer, and Sean Young. The film is about a group of rogue “Replicants” (androids) that have returned to Earth from an off-world colony looking to extend their four-year life-spans. Of course, all this behavior is highly illegal and the short life-span is a fail-safe put into place by the Tyrell Corporation for just this sort of thing, so retired “Blade Runner” Rick Deckard (Ford) is tasked with taking them out. This is no easy feat since these Replicants are Nexus-6 models, the most advanced kind, but if we’ve learned anything from 1980s action films…

In all seriousness, Blade Runner is by far the most thought-inspiring entry on this list. During the course of the film, we start to wonder if Deckard himself is a Replicant, which is something that gets way more attention in the 2007 “Final Cut,” with his dreams of unicorns (not kidding) starting to look suspiciously like memory implants. Not only that, but Deckard enters into a love affair of sorts with Rachel (Young), who is a Replicant so advanced that she herself isn’t even aware of her synthetic nature. Human/android relations: depraved or a thing of beauty? The choice is yours.

Perhaps one of the best things about Blade Runner is Rutger Hauer’s performance as Roy Batty, the Nexus-6 who just wants more time to experience life. Disillusioned with his four-year life-span, Batty seeks out his creator, Dr. Tyrell, and demands that Tyrell give him “more life” in one of the film’s stand out scenes. When Tyrell refuses, the meeting takes a nosedive and Batty winds up crushing his creator’s head with his bare hands. Whoops!

Something about Blade Runner that never ceases to amaze me, even now in 2015, is just how damn good it looks. Everything from the set designs to the costumes scream “retro-fitted future”, and I’ve found myself watching the film on mute just to admire how incredibly pleasing to the eye everything is. If you haven’t seen this one yet, I implore you, go do so as soon as you are able. But make sure it’s the 2007 “Final Cut”!

Only two films left in the countdown! I hope you’ve got your bug spray for this next one!

I wasn’t kidding about the bug spray, this movie has more “bugs” than you can shake a stick at! The sequel to Ridley Scott’s Alien was directed by James Cameron and stands as somewhat of a departure from its prequel, yet I think this movie is what gave the franchise much of its identity.

After being stranded in space since the events of Alien, Ellen Ripley (Sigourney Weaver) is finally rescued and brought back to the Weyland-Yutani Corporation where she discovers that she has been in cryo-sleep for fifty-seven years. Because of this, Ripley has outlived her own daughter, much to her horror. This, coupled with the living nightmare she experienced aboard the commercial ship Nostromo during the events of Alien causes Ripley to agree to travel with a squad of space marines, and yet another android, back to LV-426 to investigate a disturbance at a space colony. Hmm… I wonder what the trouble is?

You guessed it: tons of aliens. It appears that the aliens decided to take the colony for themselves (you should see pre-colonized LV-426. I don’t blame them), where the alien queen continues to birth more baby aliens with each passing day (ahh, motherhood). This little “accident” turns out to be the result of corporate greed since the alien eggs could potentially be worth billions of… space… money.

The cast of Aliens is spectacular. Alongside Weaver there’s Michael Biehn, Lance Henrickson, Bill Paxton, and Paul Reiser… yes, that Paul Reiser. Reiser plays the role of Burke, a representative of Weyland-Yutani who is sent along with Ripley and the marines (note to self: potential band name). To the surprise of no one, Burke turns out to be scum and is sorted out one way or another by the film’s climax… okay, the aliens kill him, happy? Well actually to be specific, the aliens capture him and plan to use him as a host, but Ripley later burns down the whole baby alien factory with a flamethrower (why so cool?), so we can safely assume Burke got what was coming to him. Good riddance.

If Alien left you feeling bored (ProTip: it shouldn’t), Aliens will slake your bloodlust since there is no shortage of “aliens vs. marines” battles involving high-tech space-weapons, lots and lots of screaming, chaos, and destruction. Watch it with the volume maxed out for the best results (writer not responsible for destruction of reader’s television set).

It’s no wonder that Aliens is often considered to be one of the best films of its kind… but it’s not the best. Not on this list. That distinction belongs to the number one spot on the countdown. Here we go! 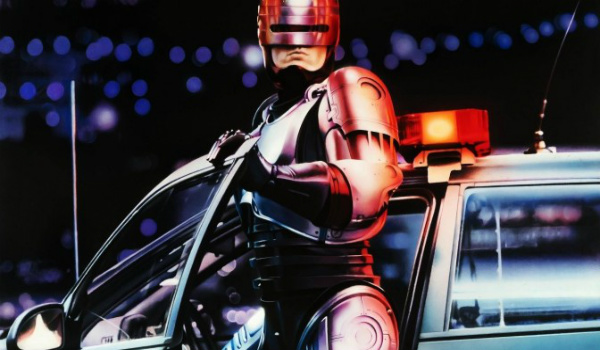 Don’t tell me you didn’t see this one coming. Master director Paul Verhoeven‘s Robocop is the mother of all 1980s sci-fi/action flicks. Why? Because it’s got a great story, exciting action, the best villains, glorious violence (especially the unrated version), and the tin can man himself: Robocop. Peter Weller gives a stunning performance as Alex Murphy, a good cop that is blown away by a ruthless gang of law breakers (more on them later) only to be brought back to life as the cybernetic deliverer of justice known as Robocop! All is not as it seems however, as Robocop soon experiences memories of his own death and sets off on his own accord to exact revenge on his killers.

For those of you that saw the recent remake, most of this may seem familiar, but the two films really are very different. For one, ’87’s Robocop depicts scenes of graphic violence, which I think is integral to the story. For example, Alex Murphy’s death scene is brutally violent; arms and hands are blown off and shotguns are literally emptied into Murphy’s body. “Why is this important?” you may be asking. Well, since Murphy’s death was so personal in the film, it makes the entire revenge plot much more effective and satisfying. On the other hand, the remake’s car-bomb scenario? Not so much. It’s not that I didn’t like the remake, it’s just that the original is leagues ahead of it. But enough about the remake, let us move forward!

The villains in Robocop are very interesting and endlessly fun to watch. Clarence Boddicker (Kurtwood Smith… yes, that Kurtwood Smith) and his gang are ruthless cop-killers, and they’re well-connected. Since OCP (Omni Consumer Products) owns the Detroit Police, corrupt Senior President Dick Jones (Ronny Cox) is able to keep Boddicker and his pals out of Johnny Law’s reach, effectively making them invincible. That is, of course, until Robocop decides that he’s more than a little pissed off about his death. From Boddicker’s cunning to Joe Cox’s hilarious cackling (and a Shakespeare quote) at all things inappropriate, the gang members are by far the best villains on this list.

And then there is the suit… yes, the suit. The costume design in Robocop, even when just considering the actual Robocop suit, is miles ahead of most other films both inside and out of its own genre, and before and after its time. Weller actually trained with a mime in order to give Robocop his signature robotic movements… yes, no CGI here kids. For an amazing display of Weller’s work in the suit, check out the drug factory shootout scene. It really is a triumph of filmmaking in my opinion, and proves that Verhoeven knows just what the hell he is doing.

If you’ve only seen the remake of Robocop, go ahead and watch the original 1987 classic… but only if you’re old enough! And if you are, be sure to watch the unrated version for extra bloody violence! For best results, watch Robocop on a bi-weekly basis; that’s what I do, and I’m awwwlright.

That about wraps it up for my top six best sci-fi/action films of the 1980s. I hope you guys enjoyed this list and that you check out some of the movies on it if you haven’t already seen them. Or if you have, watch them again!

What did you think of these selections? Feel free to agree, disagree, or point out any glaring omissions that I may have missed in the comments section and on our Twitter page!