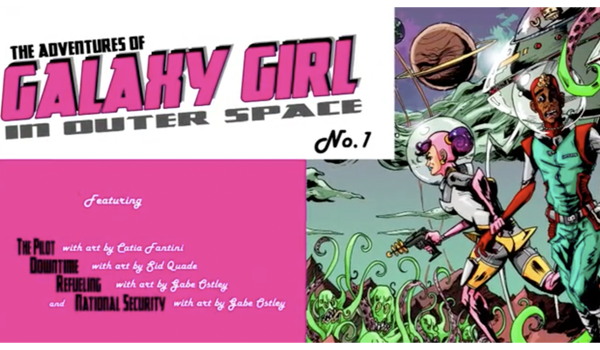 Galaxy Girl is a new, exciting, quirky comedy comic book created by Andrew Taylor. A Place to Hang Your Cape managed to catch up with Andrew about Galaxy Girl to find out what inspired it, as well as finding out the importance of a Kickstarter campaign to an independent comic creator.

AP2HYC: In your press release you mention that Galaxy Girl was inspired by quirky shows such as Rick and Morty, so what can readers expect from your comic?

Taylor: In short, they can expect pseudoscience and shenanigans. The best jokes in Rick and Morty all make light of really horrible existential crises that would break a real human being. This is a sci-fi comedy, so the series will deal with some subject matters that could easily be at home in a horror movie or some deep introspective science fiction, but Galaxy Girl will play it all off for laughs.

AP2HYC: Can you give us an insight into the world of Galaxy Girl and its inhabitants?

Taylor: Worlds! Plural. Galaxy Girl was partly inspired by pulp retro sci-fi magazine covers, so the G.G. Universe will be full of shiny 50’s aesthetic, bubble helmets, and googie girls. I described my vision of the book to my artists as “modern sci-fi if Star Wars never existed (not that that is an alternate reality that I would ever want to live in).” Galaxy Girl will treat space much like some other stories would treat alternate realities – there is an intense weirdness to infinity.

AP2HYC: If you could summarise the comic in five words, what would they be?

AP2HYC: Has creating and writing comics always been a passion for you?

Taylor: Yes, I suppose so. On my Kickstarter page, I joke about a comic I made when I was thirteen years old called Chainer 13. He was this awful Spider-Man/Wolverine knock off with little spider legs coming out of his abdomen and chains that shot out of his elbows. Yes, I said his elbows. I’ve been drawing all my life and always thinking of elaborate stories to go along with my drawings, but only recently did I decide to actually write those ideas down. I co-wrote a book I came up with in 2012 called Potential (which had a successful kickstarter campaign), but Galaxy Girl is my first solo writing adventure.

AP2HYC: How do you find the process of creating a comic book?

Taylor: It’s incredibly satisfying on the writing end. I just jot out what’s in my head and then I get to look at all of this great art that’s coming in from these talented artists! I’ve been on the art end as well and while that is satisfying too, it takes a hell of a lot longer to get to that feeling.

With issue one of Galaxy Girl, I’ve got Sid, Catia, and Gabe. I picked these three really incredible artists who are all so different. Their art styles would never be together in any other book! So it was a lot of fun to see their different takes on the characters of Galaxy Girl and Norman, and I hope readers will find their differences just as exciting as I do.

AP2HYC: What does the future have in store for you and Galaxy Girl?

Taylor: Well I’ve already posted an ad on Digital Webbing looking for artists for issue 2! I’ll take Galaxy Girl one issue at a time, that’s sort of the whole message: “The fun is in the journey, not the destination.” That’s what G.G. says to Norman when the topic of his ultimate dissection is brought up. So I don’t know how long it will run, but I envision it as being a starting point for a lot of tomorrow’s best artists.

I want to keep bringing in new talent for short stories and giving young artists like myself the chance to build a portfolio. That’s kind of the idea that got the project going in the first place. I hope to go on to create lots of other stories both creator and company owned (I’ve got a great Marvel Boy story in my head based on the music of Florence and the Machine), and keep Galaxy Girl going for as long as I can. I’ve already got another book in the works with one of my Galaxy Girl collaborators. That one is called Dick Mandog: Paranormal P.I., and it’s a body-swap comedy-noir about a dog who must learn what it means to be a man. Also there will be voodoo zombi’s (there’s no “e” in voodoo).

AP2HYC: How important is Kickstarter to independent comic creators?

Taylor: It’s kind of essential! There is this huge wave of independent comics these days, in no small part thanks to Kickstarter. The internet of course makes it possible for anyone to put up a webcomic. When it comes to printing a physical book that you can hold in your hands, Kickstarter makes it all possible. There is still room for improvement, and everyone who has used the platform before knows exactly what I am talking about. (Tell me how to become a featured project already!!! Yeesh.) It’s also kind of fun though to be a part of. To see creators posting pictures of their boxes upon boxes of books coming in just as they are preparing to send them all out to you. It puts a face on the whole process, which would otherwise go unnoticed.

AP2HYC: Thanks for your time, and good luck in the future!

Taylor: Of course! Thanks for your interest in indie creators!

If you want to be a part of the fun adventures of Galaxy Girl, you can contribute to the Kickstarter campaign.

Does Galaxy Girl sound like a comic you’re likely to read? Have you contributed to the Kickstarter page? We’d like to hear from you in the comments and don’t forget to follow us on Twitter!