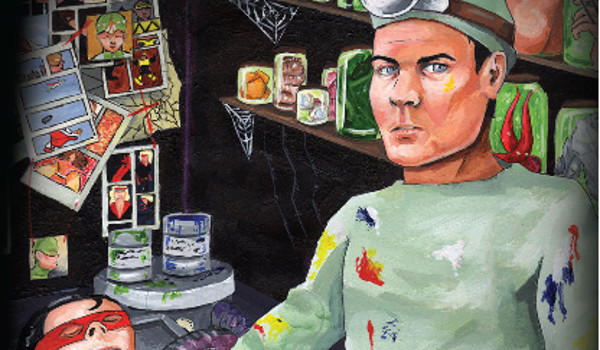 When not writing about comics, I play guitar in a girl-band.

For me, there’s nothing quite like heading to an estate pub in Stockwell (or wherever) with unreliable equipment and even less reliable bandmates; waiting one’s turn on a roster of psychobillies, electro-clashers and post-punk-feminist-ukelelists. Because for a brief moment, as the dodgy house amps keen to the power chords and the PA system buckles under the weight of a song nobody knows, art happens; art that that is not monetised or scrutinised but simply felt and judged by the effect it has there and then in the lived moment. Judged by one simple question –

I love indie comics in the way I love indie bands. There’s no financial reward in being involved in either and, as a result, they are the product of private obsession and a quixotic, some say idiotic, love of the form. Sliced Quarterly #1, the new anthology edited by Ken Reynolds, served my eyeballs in just the same way an unknown band serves my ears, with the magic of the familiar made thrillingly new again. Its pages are filled, as indie collaborations usually are, with goodwill strips by friends of the editor. Slightly less usual is that all of the strips are fabulous. In short –

Reynolds’ introduction pretty much sets the tone for the collection. His main concern being to “experiment with the comic book narrative” and “prove the value of sequential art in it’s ability to be insightful, emotive and provocative”. This is a far more difficult feat than it appears. Generally, the first thing arty types do, to give their work a veneer of sophistication, is play with linear narrative or dispense with narrative altogether. Narrative keys into our collective need to find purpose in our frankly pointless existence. That’s why we get hooked on soap operas. Even I was once in thrall to Neighbours. It seemed so important to find out what happened next, though I couldn’t tell you a thing about any of those plot lines now.  Needless to say, there’s a year I’ll never get back.

So it was with trembling fingers that I opened the comic. Can experimental art and a punchy narrative really coexist?

Happily, judging by Sliced, they can. One of my favourites from the collection was “Geophagy” by Stewart Moore. It is entirely narrative driven. Dialogue-free, its sequence of events pulls the reader into the story with gorgeous “bande designe” artwork reminiscent of Moebius. Yet the narrative makes no sense whatsoever. A man with a head made of newspaper print engages in what appears to be supper/cunnilingus with a mountain, then gets lifted into the air by the escaping juices…or something like that! There’s really no logic beyond the movement and the fun of sensation. If only Moore was in charge of the Neighbours writing room. An episode where Helen Daniels is cut open to reveal that her entrails contain hundreds of malformed Scott and Charlenes would actually be worth watching.

Reynolds’ own story, “Meta-Affliction”, is another highlight. A riff on the perils and pitfalls on writing from life, it takes a strong central story and adds to it the fun of breaking the fourth wall as the central character starts to take issue with the narrative boxes. This fun is compounded by the fourth wall feebly trying to reassert itself. It’s wonderfully witty and creative.

Rob Cannon‘s haunting “Ontologue” does a similar thing, but with an undercurrent of sadness, as his characters engage in an interpersonal drama that may or may not be the result of the main protagonist’s multiple personality disorder against the backdrop of a monochrome suburbia, not unlike a netherworld Ramsey Street. (You may have spotted that that’s three stories with fancy classical titles. All lovely, though throwing in a bit of ancient “bubble and squeak” doesn’t necessarily make stuff better. I once went to the doctor about some redness that had appeared on the white of my eye. He diagnosed “episcleritis”, which I was comforted by until I discovered that it just means “redness on the white of an eye”).

All the strips in the first issue are highly enjoyable and never-the-less than fascinating – and I would certainly write about them all were it not for my unfinished tax returns. Honourable mentions also go to “Spotlight On Installations” (Ben Peter Johnson); “All Along The Watchtower” (Chris Redfern and Dave Snell); “Szlam/Slime” (Lukasz Kowalczuk); “The Elevations And Depressions Of A Local Radio Presenter” (Bee Bop); “Pulse” (Scott Melrose and Tony Suleri).

But maybe it’s best for me simply to entreat you to go and buy a copy of this compendium of comic-book coolness. Contributors have offered the best of their artistic and writing talents in a series of narratives, which graphic designer Reynolds has then lovingly formatted and lettered. This gives the book as a whole a sense of continuity and homogeniety of purpose. In stories such as wonderful urban legend “The Body Bag” by Chris Sides and Denis Vermesse, Reynolds has even added Francis Bacon style boxes around the character’s faces to enhance the narrative impact.

In short,  this comic manages to combine as strong a narrative as a Neighbours episode while being as hip and edgy as an underground rock concert in Stockwell. What’s not to like?

Go out and support indie comics by buying every issue of the excellent Sliced Quarterly you can afford.

Have your say. Do indie and small press comics like Sliced Quarterly appeal to you? What percentage of your collection is published by presses other than the mighty DC and Marvel? Write below or on our Twitter.