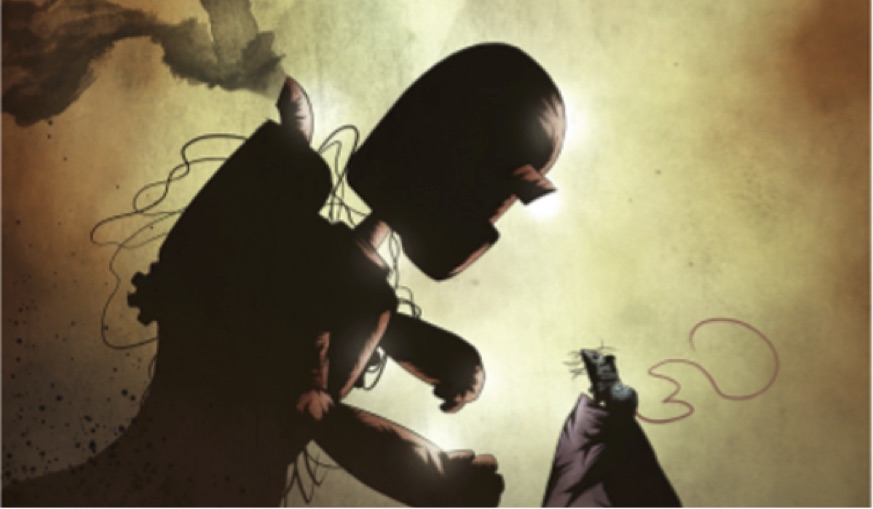 It seems a bit weird reviewing a speculative, soon-to-be-finished-but-currently-just-a-gleam-in-the-creators’-eyes comic.

But hey, weird is my bag.

And with Suffolk based super scrivener Ken Reynolds and West Midlands wunderkind Sam Bentley at the helm, I have no doubt that Cognition‘s bag of weird (currently funding for a print edition on Kickstarter) will also come with a matching wallet of wonderful. A laboured simile true, but having greatly enjoyed previous works from Reynolds such as 100% Biodegradable and Sliced Quarterly, I have every faith that the team will deliver another page turner in the coming months.

Issue #0 can be downloaded by anyone who want to get a feel of the style and substance of this latest venture, and I heavily recommend that you do. I’ve read the three teaser tales several times now – first with an eye on sage and pithy things to say in this review; then because it’s bloody good fun.

Set in the Nineteenth century, the comic follows the adventures of a copper and steel robot named  “Cal”, who has become the vessel of a displaced human soul and “Sigma”, a demon trapped within the body of the mouse; both characters being the result of a single botched experiment in fusing science with spiritualism (Imagine Charles Babbage‘s “analytical engine” being used to trap souls).  This odd couple are recruited to “battle spirits, monsters and folkloric nasties” for the British Occult Secret Services (a Victorian version of Mike Mignola‘s B.P.R.D.). The real battle, however, seems to be between the Cal and Sigma, as they struggle for control of one another.

Before we delve deeper, I’m going to use the S word – that’s right – Steampunk. Cognition is a must-read for any lovers of the genre and maybe the gateway drug for those unfamiliar with the aesthetic and conceptual delights of fusing Victoriana with alternate reality sci-fi (My first taste of steampunk was in the pages of 2000AD, when Nemesis The Warlock visited a civilisation that had decided to base its technology on the “golden age” of steam).  It is primarily an aesthetic movement, at once dark and thrilling, and I for one was hooked. Cognition shares some of the DNA of early 2000AD strips, along with the work of “Weird-fi” writers like China Mieville, in that it manages to be simultaneously recklessly inventive and parochially homegrown in its Englishness.

In his own words, Reynolds has run with the idea of “duality” in the comic. The main duality being that of reason and spirituality. Arthur Conan Doyle‘s Sherlock Holmes stories are a big influence, with seances and folklore providing the mood and the two outsider protagonists providing the means of negotiating the strangeness to find the truth. I can see strong echoes of Doyle’s “The Speckled Band” in the Cognition strip “They Never Saw It Coming”, where the two heroes debunk a false medium or “The Hound Of The Baskervilles” in a gleeful tale like “The Devil’s Fishing Hole”, where the denizens of Hackney Marshes discuss the difference between a Will O’ The Wisp and  a Hinky Punk (One’s good, one’s bad). The difference between the world of Sherlock Holmes and that of Cognition being that, for Cal and Sigma, the truth is far stranger than the rumour.

All of the tales draw on different aspects of the British experience. “Frame Breakers” for instance is a riff on the Luddite movement. In this regard the comic has the elegant simplicity of Neil Gaiman‘s Sandman stories. Editor David Hailwood has done a fine job in…well…editing. That sounds boneheaded, but an editor who isn’t afraid to cut and trim and refine and reign in a writer’s excesses is a wonderful thing. A strong editor allows the story telling to shine through by eliminating the extraneous noise; evidently something that has happened here. All the tales are lean, mean and to the point.

Bentley’s artwork perfectly captures the mood of Reynold’s writing. His high-contrast panels show the influence of Andrea Sorrentino and Richard Isanove. The whites are ghostly, adumbrated white; the blacks impenetrably black. The overall effect is greater than the sum of its parts, which is exactly what the tales need. The artwork feels uncanny; eschewing glamour yet always remaining visually arresting. The blank eyes of a copper robot and a demonically possessed field mouse speak volumes. Bentley certainly knows his way around a monster too, when need arises. Prepare to feel goosebumps.

What the stand alone tales of Cognition #0 hint at but don’t fully articulate is the relationship between the robot Cal and the mouse/demon Sigma. This is something that I expect the arc of the #1 will start to address. There are hints from Reynolds that the relationship is not a classic buddy tale of two spiffing dead chums having fun and fighting monsters. It is again a rather sinister take on the “duality” theme; with both demon and man engaged in a struggle for ultimate control of the body.

Cognition is a must for all lovers of a mystery, wrapped in an enigma and then sprinkled with “strange doings”. If, like me, you want to see this publication get the chance it deserves, don’t hesitate to click on the link below. Highly recommended.

Have you contributed to Cognition‘s Kickstarter yet? Let us know in the comments section below or send us a Tweet!