Home » We Need to Talk About Batman 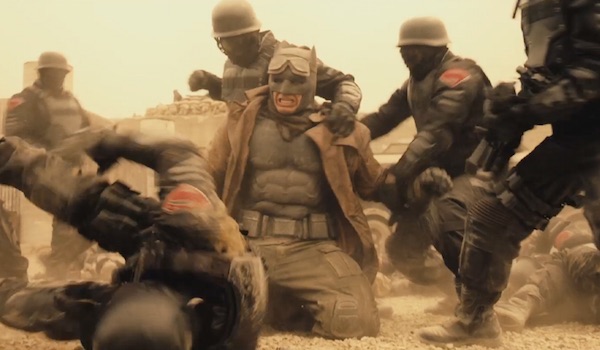 Before I start, I have three things I need to establish:

1. This is a spoiler filled feature on Batman v Superman.

3. If you’re still reading and you haven’t seen the film… STOP NOW!

Still there? Great, let’s get started. First off, I am writing this after having left the cinema about two hours ago. I have digested, discussed and critiqued the film, have already booked in my second and third showings of the film and overall I am absolutely chuffed to bits with the movie.

There is much to like in this film and on the whole it ticked 95% of the criteria I personally went into the film with. This criteria I admit was largely based upon Batman, I myself being a lifelong megafan of The Dark Knight. I will discuss in a future feature my general overview of the film but I’d like to take this opportunity to solely feature on the character responsible for stealing the show (in my opinion) and more importantly the only Batman niggle I had leaving the cinema, all be it a small one.

Okay, here goes. An issue that has raised much debate with critics and reviewers is Batman’s moral code or lack thereof depending on your ideological standpoint. When I left the cinema, I heard one person remark on the way out, “Batman doesn’t kill! What was with that?”. This got me thinking: are audiences ready for this representation of Batman, a portrayl the like of which has not been seen since Tim Burton‘s take on the character?

My quick response would be yes but that doesn’t mean in the two hours since seeing the film that I haven’t mulled over it in depth, changing my mind here and there. In the majority of Batman’s depictions there are two definites:

1. Batman does not use guns, largely due to the circumstances in which his parents were murdered by Joe Chill.

2. Batman does not kill.

In Batman v Superman he does both, the latter coming by way of an excessive body count. The one scene that stood out for me was when Batman kindly offers a tow to a car he  has just ploughed through with the Batmobile, passengers still occupying the vehicle, the car doing more flips than an Olympic gymnast. However, like the very grapple hook that snared that henchmen’s vehicle, I was hooked. As I watched the film, I went through moments of being torn. At stages the executioner aesthetic of  Batman seemed detached, the morals I idolised from my childhood hero growing up and to this very day, seemed alien. I kept asking myself: if he kills why is Arkham or Blackgate full of villains? How is the Joker still breathing?

And then that’s when I got really excited, the future of Batman still firmly on track. Don’t get me wrong, I loved the dynamic between the Joker and Batman in The Dark Knight, Heath Ledger‘s Joker obssesed with forcing Batman to break his one rule.  But Ben Affleck‘s Batman highlighted something I wasn’t aware I had been missing for a while. I do not refer to the return to source material, the film a grand homage to Frank Miller, nor for it’s level of brutality. No, it was the return to a Batman designed to cater for a more adult audience, a concept I first fell in love with when I had watched Burton‘s films as a young boy.

When I left my screening of the film and heard that person discuss Batman’s death count I desperately wanted to refer him back to the Tim Burton era, where Batman actually kills the Joker or a certain circus strongman who meets a violent end when Batman sticks a few sticks of dynamite down his trosuers in Batman Returns! I however, took the high road not wanting to come across as condescending.

Now don’t get me wrong, I am not saying that I want every director to mirror Burton, far from it, variety is the spice of life and all that Jazz but Zack Synder, no matter what the DCU may have in store for him, has earned his stripes. His depiction of Batman was ballsy and brave. Although he addressed some of the criticisms hurled  at him for Man of Steel e.g. Metropolis’ destruction, he stuck a middle finger up to all those who criticised his decision to have Superman kill Zod, instead amping it up with Batman. I loved Synder‘s tongue in cheek references within the film to said destruction and his critics. For instance, when a News Anchor states that a business area is deserted as work hours have finished or when Batman states he has selected the port as the location for his final battle because it is deserted.

What excites me upon further analysis, is the fact that I truly believe Batman at one time did not kill but the events of Metropolis’ destruction and of Robin’s death have changed him. I do however believe this changes at the end when he spares Superman and although Martha Kent’s captors are brutally taken down, it is largely superficial. Batman sees the need for justice and the sparing of life all be it via a form of righteous brutality. This journey excites me personally and the blurring of right and wrong is what always has and always will make Batman the complex and rich character that he is.

After all, Batman is a vigilante and needs to moderate himself not wanting to become what he fights against, as he himself proclaims to Wonder Woman, “Men are still good”. For my sake I hope so to an extent. Affleck‘s brutal edge is a quality I hope we do not lose in future onscreen depictions.

What did you guys think? Did Batman go too far? Let me know what you think in the comments below or on our Twitter page!