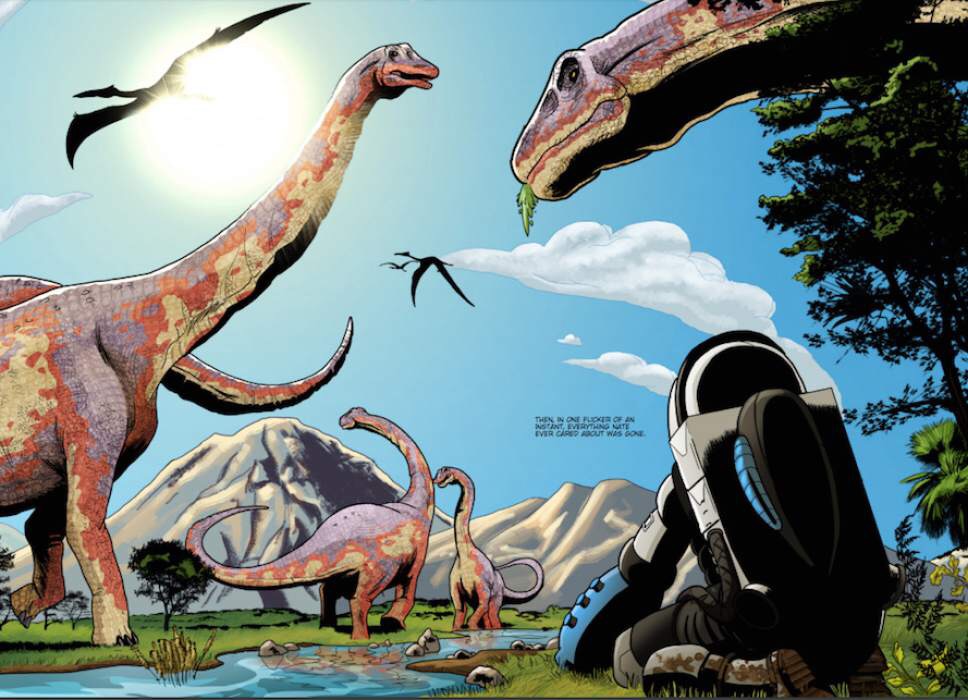 It’s not everyday that you pick up a comic and generally find yourself completely taken aback. However, I am more than happy to report that that’s exactly what happened to me with Chapters One and Two of Voracious.

Voracious tells the story of Nate Willner, a promising apprentice chef who is plagued by one devastating tragedy after another, the opening panels of Chapter One depicting the loss of his beloved sister in a fire. Nate, devastated and destitute settles on relocating to the dead end town he grew up in and sought to escape from in the first place: Blackfossil, Utah.

Living with his Grandma Maribel, a spritely if abstract character, Nate struggles to fit back into the routine of a nobody, working as a chef in a deserted diner where all thoughts of culinary grandeur are all but dead. That is until, he is contacted by the lawyer of his recently deceased uncle, a man whom he had only previously met once. Inheriting $500,000, an ominous note and directions to a property in the middle of nowhere, Nate sets out to claim his inheritance. Little however, can prepare Nate or the reader for that matter, for what he unearths upon his arrival.

A recorded message from his reclusive and deceased Uncle reveals that whilst alive he had been a scientist, obsessed with his work. A choice is offered: burn his research to the ground, destroying any trace of his uncles work or continue his legacy. What is his legacy I hear you ask? Why its travelling back in time or to be more historically apt, to one fixed point (No Delorean readouts here) to that of the late Cretaceous period… Basically put, when dinosaurs walked the earth.

Now here is where the USP of Voracious really kicks in. When you hear the phrases dinosaurs and comic books mentioned, the last response that would probably jump into your mind are unique and/or niche. Dinosaurs have been top of the creature feature food chain for decades now, last year’s Jurassic World demonstrated quite clearly the desire within fans to keep returning to the genre, most notably via the box office it grossed.

Moreover, comic books have also expanded, the power of the Superhero/comic book juggernaut showing no signs of slowing down. So you’d be forgiven for thinking that every conceivable idea concerning dinosaurs and comic books had been tapped, bled dry like a goat hanging above a T-Rex enclosure. WRONG!

Voracious turns both popular genres upon their heads, hybridising them to such an extent that John Hammond himself would be proud. The DNA strand of Voracious as it were, is its ability to both subvert and adhere the conventions of both genres when needed, whilst remaining completely original. What’s more is the comic’s post modernist ability to openly mock itself through its self-referential tone and tongue-in-cheek references to popular culture.

What makes the comic all the more enjoyable is the concept and the issues/debates it proposes, namely, what would you do if you could travel back to a time when dinosaurs walked the earth? Would you try to bring them back with you and establish your very own theme park? Maybe set up a time travel agency? Use the untapped resources for  monetary gain? It is the latter that our protagonist settles upon or more aptly, decides to eat. Yes, you heard me right. Nate goes back in time, kills a dinosaur here and there and brings it back with him to serve to his unsuspecting customers via his newly purchased restaurant, paid for out of his uncle’s inheritance. Now if that isn’t savvy business acumen, I don’t know what is.

Moreover, the artwork is exceptional within Voracious, each panel lovingly drawn. As an additional sweetener, or should I say recipe for success, the creators have decided to include a dinosaur menu card at the back of each comic, providing the reader with a genuine culinary treat to attempt themselves with genuine ingredients.

However, a fridge extinct of ingredients is not my main concern with Voracious. Granted it is only one concern and a slightly cynical one if I am being honest. The dinosaur in the room as it were for me, comes via the comic’s longevity. As engaging as the comic was, I could not help but think about how many issues the series has in it. If it were to be published as a miniseries or short-term run I could see me being fully engrossed. But after 50 issues? 100? I couldn’t honestly say if the premise would hold my attention for that long. I am of course more than happy to be proved wrong.

If you’ll permit me to be metaphorical for a second here’s the rub. Voracious is much like one of Nates’s menu’s: full of promise, treats and something to get your teeth into. However, the one thing I despair over is whether this menu will have any variety? A dinosaur cooking chef that can time travel to one fixed point in time has its limitations. However, overall this is just a niggle.

At the end of the day that’s the writer’s concern; I intend to stay the course and hope to be presented with diversified plots and the untangling of enigmas established in the first two issues. I highly recommend Voracious and feel it has something for everyone, a little something for even the more discernible pallet.

So what did you think of Voracious? We’d love to hear your opinions in the comments below or on our Twitter feed.