Home » REVIEW: Teenage Mutant Ninja Turtles: Out of the Shadows 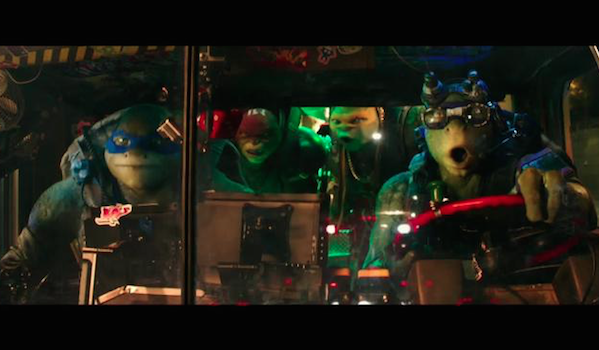 I’m a simple man when it comes to entertainment. I don’t go into most movies expecting to be blown away by a solid 10/10. Not everything has to be a perfect masterpiece to be considered “good” to me. As long as it’s not a complete train wreck filled with plot holes and horribly portrayed characters, then I’m a happy man. That being said, I can’t help but feel rather disappointed with Teenage Mutant Ninja Turtles: Out of the Shadows.

I know what you’re thinking – it’s the Ninja Turtles. Of course it’s going to be bad! See, I actually enjoyed the first film of the rebooted series. Hell, I’ve even gone on to defend it from naysayers who, for some reason, expect this deep, jaw-dropping story from a movie about anthropomorphic turtles with a knack for martial arts. I’m aware of what kind of movie I’m going to see, and that’s what makes films like Teenage Mutant Ninja Turtles so enjoyable for me. But even with these easy-to-satisfy expectations, Out of the Shadows was still a bummer. (spoilers ahead!)

The movie starts off pretty strongly as we’re quickly re-introduced to all the main characters right away. We’ve got all four turtles secretly watching a Knicks game as April O’Neil attempts to steal vital information from uber-genius/mad-scientist-in-training Baxter Stockman. The heroes are trying to prove that Stockman is in cahoots with super-villain terrorist Shredder, now in police custody after the events of the first movie. Shredder, who is currently being transported to a new holding facility, is sharing his truck with dimwitted partners-in-crime Bebop and Rocksteady. Who happens to be driving the armored truck carrying all these key villains? Casey Jones, a light-hearted and good-natured police officer with a passion for justice, even if it means taking it into his own hands.

All these characters being introduced within the first 20 minutes of the movie might seem rushed and cluttered, but for the mega Ninja Turtle fan, it’s like a refreshing blast of nostalgia. We haven’t had a live-action Casey Jones in more than 13 years, and we’ve never seen Bebop, Rocksteady, or Stockman in the flesh before. It’s times like these where you have to be thankful that we live in such an age where these characters can finally come to life before our very eyes.

But wait, there’s more! While Shredder is attempting to escape from the police, Stockman activates a teleportation device that accidentally transports him to an alternate dimension, where he encounters Commander Krang, a brain-like creature living in a giant mech-suit who is actively seeking to take over the world. I honestly don’t see how any Ninja Turtle fan can’t appreciate Krang’s appearance. While I personally wish that they didn’t reveal Krang in the trailers and TV spots, I still found myself thrilled to see this major villain on the big screen for the first time.

The fan-service doesn’t stop there. We also see the fully-armed Turtle Van in action during the Shredder escape scene. It’s like they finally got someone who watched the original Ninja Turtles cartoon and read the comics to take the helm behind this movie. These elements are what makes the Ninja Turtles so much fun. Even if the movie was on the mediocre side, the fan-service still deserves to be appreciated.

After the introduction of all these key players, the movie begins to take a turn south. The plot is like something straight out of the cartoon series, which is awesome, but it’s super predictable. Krang tasks Shredder with collecting pieces of a teleporter to bring the alien commander and his war machine, the Technodrome, to Earth. Rather than do the work himself, Shredder recruits Bebop and Rocksteady to be his errand boys. In order to increase their lethality, he injects them with TCRI ooze, which transforms Bebop into a purple-mowhawked warthog and Rocksteady into a leather-vest-wearing rhino. 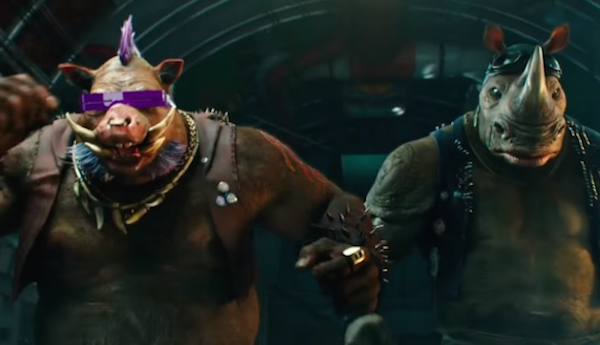 Bebop and Rocksteady are two of my favorite characters from Ninja Turtles lore, so the first time we see them in the flesh, well, you can imagine my excitement. These two were the best part of the entire movie. Gary Anthony Williams and Sheamus nailed the roles perfectly, but the latter’s Irish accent was a bit distracting. You can tell that the two actors had a lot of fun with their roles as they continuously ribbed each other throughout the movie. My only complaint is that we didn’t see enough action from them. I wanted a big fight scene between the turtles and Bebop and Rocksteady. We get maybe one or two punches exchanged between the opposing sides before they go their separate ways.

When I first heard that sports-themed vigilante Casey Jones was going to be in Out of the Shadows, I was iffy about how he was going to be portrayed. I wasn’t a fan of Elias Koteas as Jones in the original Ninja Turtle movies, and I was hoping this time we’d get to see the real brutal character from the comics and cartoons. The initial announcement about Stephen Amell taking the role had me pumped, but when I saw his performance in the trailers, I wasn’t too thrilled. Stephen Amell is just too nice for Casey. Casey Jones is supposed to be brutal. He’s a borderline psychopath with no hesitation when it comes to upholding his questionable sense of justice (I’m pretty sure he beat the crap out of someone for littering once or twice). Instead, this movie turns him into a well-meaning vigilante who likes hockey and simply wants to become a police detective. That’s all well and good, but that’s not the Jones I wanted. On the bright side, you can tell that Amell had a lot of fun in the role. You can sense his enthusiasm in every line he speaks. An actor’s performance hinges on whether they are having fun with the role or not. Amell may not have been a great Casey Jones, but you have to appreciate his passion.

Another note about Casey Jones: the mask. He only wears his trademark hockey mask for one scene in the entire movie! This didn’t surprise me. Movie studios seem to be adamantly against keeping masks and helmets on superheroes. This is like Deadpool all over again. Why can’t we just have a character keep their mask on for a majority of the movie? They did it in Dredd, they did it in The Dark Knight Rises – obviously it works! I almost feel like saying don’t even bother bringing the character into the movie if you can’t even keep their mask on! Ugh… it bothers me so much…

Back to the movie. Half of Out of the Shadows is dedicated to Shredder’s mission to bring Krang to Earth while the other half is about the turtles struggling with their secretive lifestyle. Michelangelo and Raphael want to stop hiding in the shadows as “freaks”, and the TCRI ooze may be the key to turning them into normal humans. The two turtles work with Casey, April, and Vern Fenwick (now a hero to the city after the turtles let him take credit for beating Shredder) to steal the ooze from the police evidence locker. The heist falls apart as the Foot Clan steals the ooze first, forcing the turtles to reveal themselves to the police.

The whole subplot involving the turtles and their desire to move “out of the shadows” felt out of place in this movie. It’s great for character development, but there is already so much going on in the film that it starts to feel cluttered. I would’ve rather had this kind of subplot in the first movie, when we were still setting up the turtles and their motivations.

It also feels like they resolved this plot line so quickly and abruptly. Raphael simply changes his mind about wanting to transform into a human and chucks the bottle of ooze at the wall. All that setup, and then it’s over just like that?

The climax of the movie had all the makings of an awesome scene, but it didn’t live up to the hype. Shredder and co. activate the teleportation machine, opening up the inter-dimensional portal and allowing pieces of the Technodrome to start assembling themselves over New York City. Shredder’s ending was incredibly disappointing. After betraying Baxter Stockman and sending him away to a holding cell in Tokyo, the super-villain dons his trademark helmet and goes to meet Krang on the Technodrome. Krang instead betrays Shredder and then freezes him before stuffing him into his “collection”. What a complete waste! I expected at least one fight scene out of the Shredder, especially since we finally got to see him in a proper costume!

While the turtles venture up to the Technodrome to fight Krang, Casey, April, and Vern attempt to shut down a teleportation station guarded by Bebop, Rocksteady, and Shredder’s lieutenant, Karai. The Krang fight scene was awesome, but it wasn’t enough to make up for the rest of the subpar action going on with the humans. Casey dons a pair of make-shift rollerblades and hockey stick to distract Bebop and Rocksteady while Vern and April somehow manage to fight their way through a horde of Foot Clan soldiers. The moment when Vern knocks out Karai by body-checking her into a crate, I literally said “For real?” out loud in the theater. The Foot are supposed to be highly trained ninjas, yet they get taken out by a reporter and a cameraman? I’m willing to suspend belief to an extent, but this was ridiculous.

The turtles end up saving the day by sending Krang and the Technodrome back to their own dimension, but not before the alien commander vows to have his revenge. It’s a predictable ending, but it’s a nice way to leave the series open for continuation. Baxter Stockman, Shredder, Krang, Bebop and Rocksteady – they’re all still alive, so they could easily come back for the next film. If they do go that route, I just hope it doesn’t feel like a rehash of this film’s plot. We’ll need at least one new villain to keep things fresh.

Overall, Teenage Mutant Ninja Turtles: Out of the Shadows wasn’t bad, but it wasn’t good. I think the only people who will love it are the absolute die-hard fans of the original cartoons and comics. It’s a fun popcorn movie to watch on Netflix when you’re bored, but there’s no need to rush to the cinema to see it anytime soon.

How did you feel about Teenage Mutant Ninja Turtles: Out of the Shadows? Do you think the franchise is a disaster, or was the sequel just as enjoyable as the first? Let us know your thoughts in the comments or on Twitter!