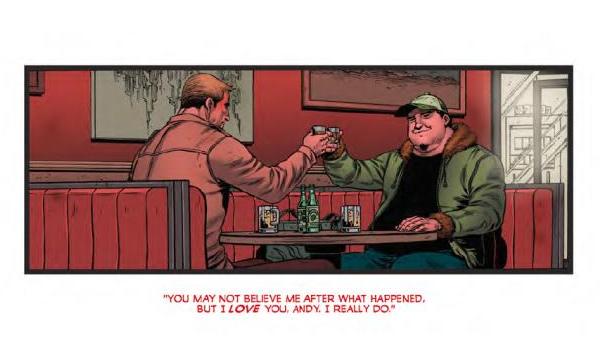 The Glory has one massive flaw and it would be very remiss of me to continue without addressing it straight off the bat. You ready? Ok, here it comes, both barrels… It’s a One Shot. Now I don’t have anything against One Shot’s, far from it in fact. My issue with The Glory is this: it’s so bloody good it seems almost a crime to have only one issue. I will largely be avoiding spoilers as I believe the pay-off at the end is well worth keeping a surprise, so let’s start by giving a brief overview of the plot.

The Glory details the meeting of two former associates: Andy who has recently been released from a long stretch in prison and Todd, Andy’s ex-partner who let Andy take the rap for a job that went wrong, a job that is never divested to the audience. Much of the comic takes place between the two men in one of their old haunts, a bar called ‘The Choice’, a metaphorical nod towards the crescendo of the narrative if ever I’ve seen one. What transpires is a narrative bread trail, the audience like Andy unaware as to the true nature of Todd wanting to meet his ex-embittered partner in crime. As the narrative progresses, tempers flare largely due to Todd’s ambiguous agenda, the real reason he contacted his estranged criminal partner a mystery right up until the very last few pages of the one shot.

What transpires truly takes the audience by surprise; I myself was taken aback, a feat which is largely dependent upon the writer Glenn Moane and his expert handling of the story, information drip fed to the reader. I often find the best mysteries are those that write the clues in plain site, the reader so caught up in events, wanting to power on, that they miss the aforementioned breadcrumbs.

The story is rivalled only by its fantastic artwork, the panels expertly illustrated serve to engage the reader further. As the story progresses, we begin to understand that Todd is besotted with Andy, bestowing upon his ex-partner a God like level of adoration. Todd’s obsession with Andy’s legacy and severe hero worship culminate in a macarbe plan to attain such a legacy himself. Andy,who wants nothing more than to leave his past life behind him, is unsurprisingly reluctant to help. Todd’s level of admiration sickens Andy, largely due to the fact that he himself is ashamed of his violent history of criminality and poor choices.

The main focus throughout The Glory, or rather the ethical dilemma, is a simple one: can one every truly escape their past? The Glory would suggest not. The ethical quandary is never truly answered, serving more as an allegory than as a definitive life lesson, the ending itself offering little in the way of closure for its audience.

As mentioned before, The Glory being a one shot is in my opinion both its greatest strength and its biggest flaw. The self contained story offers a story that’s biblical in its ideological plot, Andy a modern day prodigal son returning to a life he actually didn’t miss, Todd the Cain to Andy’s Abel. The comic is a thinking man/woman’s  comic, the more you consider the narrative, the more you get out of it and that’s partly why it has one minor flaw. Said flaw for me is that The Glory demands the readers full attention and requires you to invest so heavily in it’s characters, that when the realisation dawns upon the reader that there is currently no prequel or sequel available, it leaves you with a somewhat hollow feeling. It feels as if one needs more context to be able to bring closure to the story, however maybe perhaps that is Moane’s agenda, after all I’m still thinking about The Glory three weeks on.

So what did you think of The Glory? Would you rain down glory upon it or did you feel this one shot was firing blanks? Let me know in the comments below or on our Twitter page.