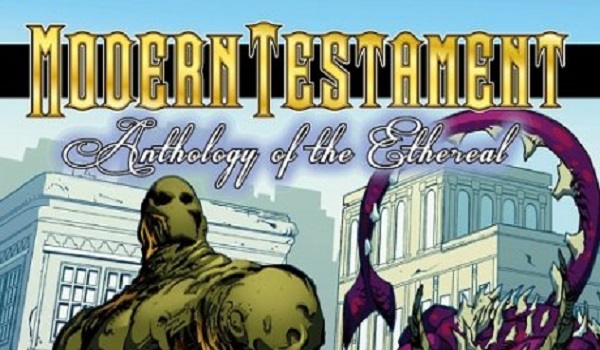 Biblical beings live among us, from golems to the Four Horsemen of the Apocalypse, and just like humanity, they’ve evolved as technology’s evolved. The second volume of Modern Testament takes us into three more stories about these strange biblical creatures, as they terrorize – and sometimes help – humanity. Volume #2 deals more with monsters, and with three new artists, Frank Martin has more interesting art and stories to add to Modern Testament‘s anthology.

The first tale in the book, “Schoolyard Monster,” deals with Joseph, a bullied kid at school, who suddenly finds a golem in his yard one day. Things escalate from there as Joseph’s golem takes on his bullies. The illustrations, done by Adrian Crasmaru, are in a distinct style. The colors are similar to water color, often bleeding into each other, while the outlines are thin and detailed. Crasmaru brings out every little detail in his character’s expressions, and his water-colored colors give the tale an almost abstract quality. Frank Martin, meanwhile, experiments with different styles of narration here, as the whole event is told primarily in a flashback. The result is a haunting, hair-raising tale.

The second tale, “The Great Hunt,” takes place in the African desert. Two big game hunters are after a rare beast that has taken the lives of many hunters before them. The old woman who sells them their weapons cautions them against pursuing the beast, but they purse anyway. Stanislav Leonov’s colors are bright and distinct, and he paints the African desert in oranges and purples that really pull the reader into the atmosphere. We feel the darkness of the desert at night, and the danger lurking in the statures. Igor Chakal’s art also doesn’t spare the grisly details – there’s plenty of blood and gore for the horror-minded. Martin again tells a taut tale of strange creatures, this time employing a satisfying twist with an interesting moral. 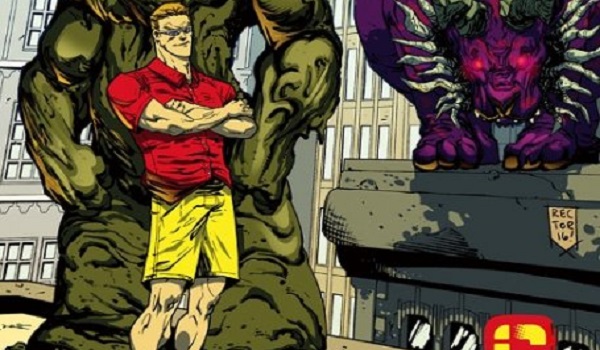 The third tale, “What Is He Good For? (Absolutely Nothing)” once again brings us face-to-face with one of the four horseman of the apocalypse, War. Thanks to the military industrial complex, he can be on vacation pretty much all the time as humanity naturally tears itself apart. However, when he finds a veteran with a robotic leg, he gets an idea to allow himself to be on retirement forever. Noreus Teves’s art pulls us into the tropical resort where War is relaxing, and her talents get showcased in a full-page montage that shows the history of war.  Laura Ruggeri’s take us into the tranquil tropical waters with plenty of warm blues and bright reds. Martin’s once again ended an anthology of Modern Testament with a tale about The Four Horsemen, and this kind of parallelism might foreshadow a conflict on the horizon. At the very least, it ties up this anthology in a satisfying fashion.

Modern Testament may not be the first story you read about Biblical narratives in the modern day, but Martin’s ability to write about deep human themes in short tales mirrors the parables these creatures represented in the Bible. In addition, the diverse staple of artists in this issue lends each story its own artistic feel, all while occupying the same universe.

How’d you feel about Modern Testament: Volume 2? Are you ready for more horsemen of hte apocalypse? Sound off in the comments or send us your thoughts on Twitter!