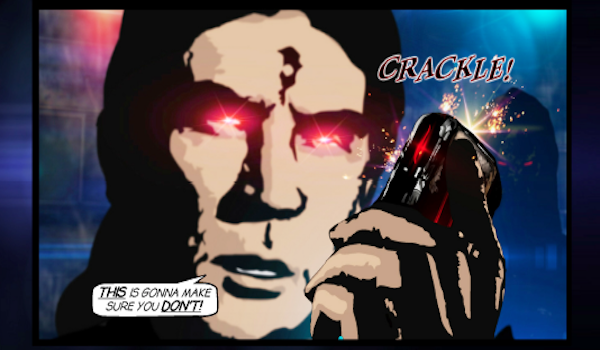 Welcome back to the futuristic, corrupt and somewhat confusing society that is City-State. A quick recap is probably needed, so where did we leave off? Citizen Investigator, James Ruthven, and former waitress/Battle Maiden, Maria, had figured out the link between the Scrap Metal Dudes gang and the missing, manic doctor. They learned that the good doctor had been involved in the production of illegal enhancement drugs before his mysterious disappearance, which were now sought after by the power-hungry Empress. In this second issue, Ruthven and Maria go behind enemy lines by breaking into the casino (where the bad guys are hiding) to retrieve some incriminating data. Despite some minor setbacks, including getting caught and attacked by a gorilla-type man, they succeed in their mission with the help of a new associate, Nehemiah Bridge, and his high tech gadgets.

Needless to say that this is not a comic for lazy days, but rather a story that will require your full attention if you’re to keep up. Personally, I felt a little out of my depth at times. With Battle Maidens, Scrap Metal Dudes, an Empress and a volcanologist, there is clearly a lot of work and ideas that have gone into the creation of this comic. It’s almost as if the authors had a grander plan than is practically impossible to put into a series of panels. Perhaps that is the danger with the movie-like theme? The leap from paper to screen would not have been a big one for Ruthven: Citizen Investigator. While no doubt filled with suspense, it appears the multifaceted storyline prevents its creators from executing it at a proper pace. It happened on more than one occasion that I had to go back to see what I had missed. Sometimes it’s incredibly slow, with just one fight on two pages, and at other times it’s near impossible to keep up. 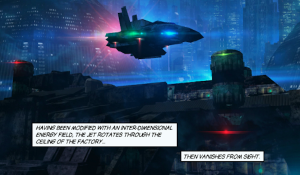 Anyhow, once Ruthven’s crime-fighting team manages to retrieve the data, the second issue centres around them trying the decode it, while also allowing us a glimpse of the criminals’ agenda. The setting mostly shifts between the casino and Ruthven’s lair, meaning one minute there’s torture and fighting, and the next it’s Ruthven talking to Jesus. I haven’t really gotten a sense of who James Ruthven is yet to be honest, but maybe that will become clear as the story moves forward.

One thing is for certain, the artwork in this comic continues to amaze, and I remain impressed with how its creators, C & Q Bowman, have managed to portray City-State in a way that matches the reader’s expectations. It’s like special effects in paper form. What I felt was lacking in this issue was the script. Aside from the “gasps” and “sobs” that I still haven’t gotten used to, the dialogue didn’t flow as well as it could have. It makes me think that it would have served the creators better to be a little less ambitious. That said, there are comics that work best when read as a whole series, which might very well be the case with Ruthven: Citizen Investigator. I guess I’ll find out.

What did you think of the second issue of Ruthven: Citizen Investigator? Sound off in the comments or send us your thoughts on Twitter! If you haven’t read it yet, all four issues are available for download on drivethrucomics.com.