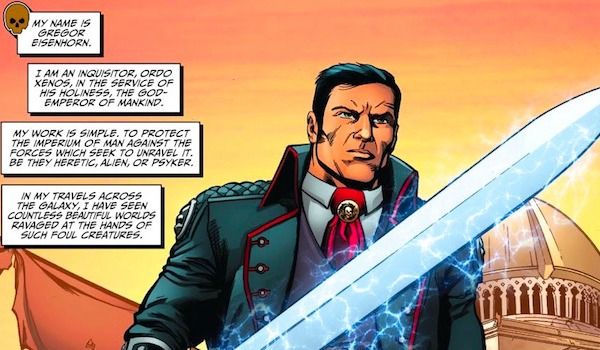 Eisenhorn: Xenos #0, produced by writer Ryan O’Sullivan, pencilled Anthony Spay, inked by Anthony Fowler and coloured by Andre Campos, opens with the introduction of Gregor Eisenhorn, an Inquistor serving a God-like Emperor. Your first thought at seeing Eisenhorn might be something along the lings “space cowboy” and you wouldn’t be far off. Right off the bat, it’s clear that you’re in for some off-planet creature hunting. Which of course, is always fun.

Much of this issue is focused on an introduction to Eisenhorn and his cohorts. We don’t get too much background on who everyone is, where they’re from, or why they’re here; but we do know that they’re the good guys chasing the bad guys. Eisenhorn himself serves as the narrator, letting us know where we are (the planet Tornish) and what we’re doing (tracking down intergalactic villain Eyeclone).

After our introductions we move onto some battle scenes. It’s in battle that we see each character is a companion you might expect to see, a solider-like character, a mage-like character, and Eisenhorn as the leader. We also learn that in addition to his enormous sword, guns, spaceship, and status an Inquisitor (though we still don’t know what it is exactly), he also has some sort of secret mind control called The Will.

The artwork in Eisenhorn: Xenos is pretty good. The colors stand out. You see the characters as intended. And, most importantly, they showcase the locations. That’s important in a planet-hopping space adventure. We don’t really get to spend too much time in each location, but we get the feel at each stop. Eisenhorn himself is depicted as a grizzled vet (of exactly what and for how long, we don’t know). His visual depiction fully matches the exposition of his narration. Oh, and he has a GIANT sword…and that’s fun too.

Little is resolved by the end of the issue. In fact, it simply seem that we’re setup for a new chapter, and we are! We find out that the reason we are left with a number of questions is because Eisenhorn: Xenos #0 is an introduction to Eisenhorn: Xenos the game (which is available now on Steam and iOS). Ah, now that makes sense doesn’t it? I don’t know what the game holds for players, but the comic certainly seems to setup brutal combat, space travel, and adventure. I happen to be a fan of cross platform storytelling and like the use of a comic as starting point for telling a narrative story in a game. And the trailer itself looks nice.

Is Eisenhorn: Xenos #0 the best comic out there? No. Is it fun? Yes. It’s something different than we’re seeing right now, though it does touch on classic beats. You could write Eisenhorn: Xenos #0 off as a simple marketing piece, but that would be a mistake. It does its job in setting up the story for the game, and gives you a hint of what to expect. Give Games Workshop, T Pub, and Pixelhero Games credit for creating something fun to start their world with.

Did you read Eisenhorn: Xenos #0? Let us know your thoughts in the comments below or tweet us here.