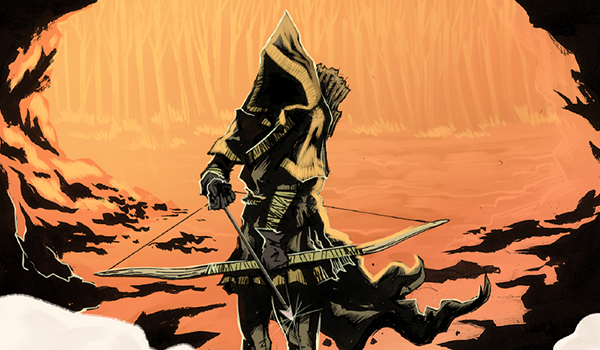 Here at AP2HYC, we’ve read and interviewed Simon Birks‘ works before and we’re glad to chat with him once again for his most recent work Robyn. You can read our review here, but either way, this is definitely a must read.

AP2HYC: What made you venture into the mythos of Robin Hood?

Birks: We were at a comic-con, and my wife came back from a walkabout talking about a comic which featured Shakespeare‘s works, and it got me to thinking about using a classic character in a new way.

Robin Hood was one of the ideas towards the top of the list, and the more we thought about it, the better it sounded. We were looking for a younger audience comic idea, and it seemed like an obvious fit.

Robyn Hood isn’t the only mythos this series will venture into, however, as you will see in issue two! We’re not saying any more right now, but it’s very exciting!

AP2HYC: What was the reasoning behind making Robyn a woman? What were some of the things you looked at when developing her character?

Birks: Robyn, the comic, is not a retelling of the stories. It’s taking characters, and using them in new ways, in new stories. As soon as we thought about changing the gender of main character to a girl, it made everything else fresh. Plus, it meant we had yet another strong female lead, and that’s important in everything.

Robyn’s character grew as I wrote the story. She is a young teen, with no one to tell her what to do. She’s adept with a bow, and confident with it. Over-confident, in fact. She’s also a loner. She’s grown up an outlaw in the forest, so-much-so that she doesn’t trust anyone. It’s just her and the arrows.

We are introduced to Tuck in issue 1. He is an older man, a monk who needs Robyn to acquire artefacts that, as a religious man, he cannot get himself. This, of course, introduces an interesting dynamic – Robyn has a kind-of parental figure in her life, whether she wants to acknowledge it or not. Whether Tuck is a good person, however, we will have to wait and see…

AP2HYC: Were there any particular inspirations from Robin Hood stories that stuck out to you when creating this world? Were they incorporated into the story?

Birks: Yes, I wanted to use the characters that the mythos created, but as mentioned, maybe not in the regular way. So, in the first issue, we are introduced to Tuck, the monk, and Will, the current Sherriff of Nottingham’s son. (Also, keep your eyes peeled for a mysterious character stalking Robyn!)

In issue two, more of the characters are introduced, as the band of merry people grow, including a disabled boy called John, who uses his crutches as his weapon, similar to the original Little John used a staff.

AP2HYC: What was it like developing the comics opening?

Birks: Writing comics is a great experience, and often the characters will appear as I write. For issue one, I wanted to jump right into the story, and have Robyn showing us just how skillful she is.

It starts the comic with the right sort of pace. I love doing splash pages, so having a double page spread for pages two and three was an obvious choice.

I was also keen to keep Robyn’s head covered, to show that it didn’t matter who was under the hood, it was the character that stood out.

Lastly, I wanted to show that despite her skill, her arrogance is a flaw, and it’s something that continues throughout the issues.

AP2HYC: What was the process like when coming up with the art style and overall character design for Robyn?

Birks: We’d worked with the artists, Ege Avci, on Hexes: The Boy Who Came Closer, and just love his art style. When I was developing Robyn, I asked if he could do some character designs, and he came back with a fantastic sample.

The colours of the comic are all down to Ege. I think he understands what the comic is about, and his dark colours really bring out the moodiness of the story.

AP2HYC: Is there anything else you’d like to add?

Birks: The initial story arc of issues one to four is written, with the arc named ‘No One Above Another’

But it’s just the start, with at least another four arcs planned.