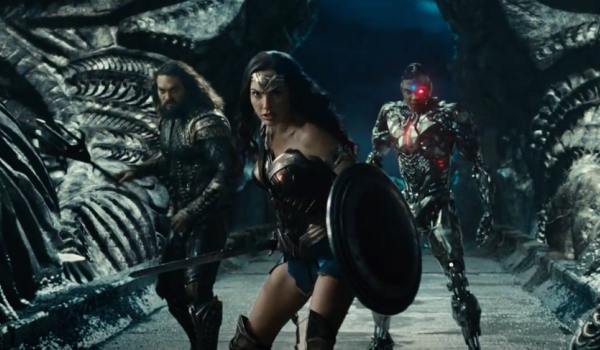 The new Justice League (November 2017) trailer premiered on Saturday 3/25/2017. After watching the trailer multiple times, DC and Warner Bros might not have failed us this time. However, I say so hesitantly because the Batman v Superman trailers and the Suicide Squad trailers looked really good but they came up short for a lot of fans.

There are some neat and awesome parts of the trailer. Everyone on the team got come cool action sequences in the trailer, except Superman. Jason Mamoa‘s Aquaman was totally kickass. We got to see him save someone for drowning, controlling a tidal wave, and jumping off the Batmobile to tackle three Parademons out of the sky!! Gal Gadot‘s Wonder Woman was brilliant and amazing as ever. (I can’t wait for Wonder Woman to come out in June—the one DC movie I’m actually excited to see).

We also got to see more of Ray Fisher‘s Cyborg. He saved a police officer/fireman/something from a giant ball of fire and metal, being all cool about it. Ezra Miller‘s Flash continued to be dorky and excited about teaming up with Batman. We get to see him in action as well—using his super-speed against the Parademons, knocking one out. Naturally, we also see Ben Affleck‘s Batman in action, but at this point, I’m not sure I really care much about that now. We also saw Batman sporting a new suit, which is lighter in tone and reminded of George Clooney‘s Batman suit.

In addition to the action parts for each of the characters, save Superman, we get a first look at the Parademons, the Mother Box activated and whom I believe to be Steppenwolf at the beginning of the trailer. We also see other characters like Mera, Lois Lane, Barry’s dad (who’s in prison, so it’s like the first season of The Flash all over again) and Jim Gordon.

There’s a couple funny parts included in the trailer because of the DCEU’s attempt to be not take itself too seriously like it did in Man of Steel and Batman v Superman: Dawn of Justice. We have Barry Allen asking Bruce what his superpower, with Bruce, deadpan, saying that he’s rich, that’s his superpower. Classic Bruce. Also, we have Jim Gordon telling Batman that he’s glad that Batman was working with people again. Then Arthur looked at Bruce in the Batman suit and said “Dressed like a bat. I dig it.” I’m sure that it took a lot for Bruce not to face-palm while he quipped at Gordon “May be temporary.”.

Aside from action shots and first looks at some other characters, the team showcased the team together in poses and it’s obvious that there will be some teamwork involved. (Duh.)

Everything is all well and fine, except a few nitpicky (maybe, maybe not) things. Okay, first, I have a problem with the song they use. Now, I like the Beatles and Aerosmith both. It’s not the song that I don’t like; it is really the fact that it doesn’t fit really within the trailer. At least, that is my opinion, others may think it does, but “Come Together” is a little on the nose, don’t you think?

Then, Batman saves Wonder Woman in one scene. I just can’t deal with DC’s crap anymore. Diana doesn’t need the freaking Batman to save her. She’s WONDER WOMAN.  In the scene, Batman was trying to get control of the Batplane (or whatever), claiming that it was his turn, and then used the plane’s guns to shoot at the Parademons…while Diana is on the ground, sword fallen off to the side. Did DC forget that Diana is an AMAZON WARRIOR? Did she not go toe-to-toe with Doomsday in Batman v Superman? There had better be a good reason Batman just had to save Wonder Woman, some logical reason Diana didn’t use her hand-to-hand combat skills against the enemy. But most likely there won’t.

The last thing that I didn’t like was I’m not sure who the bad guy really is in the context of the movie. I am very sure that the guy in the beginning of the movie was Steppenwolf. All we get to see are the Parademons, who aren’t even named and if I wasn’t a DC Comics nerd, I wouldn’t know that they are called Parademons. Also, I wouldn’t know who Steppenwolf is or what the magical but actually super advanced technology that are the Mother Boxes are. Basically the enemy in the trailer is too vague. I don’t know if that makes sense.

So, ultimately, the new Justice League was decent enough to make me dare to hope that it might be good. I still think that it’s the same plot as Avengers Assemble thus far from what I’ve seen. There are definitely some awesome things in trailer, which I think outweigh my issues with it.

What do you think about it? Are you looking forward to it? Or does it dash your dreams of a good movie?  Sound off in the comments or send us your thoughts on Twitter!